We figure there’s a special karmic treat in store for these folks.

KATY, Texas (Dec. 8) – A plan to build a mosque in this Houston suburb has triggered a neighborhood dispute, with community members warning the place will become a terrorist hotbed and one man threatening to hold pig races on Fridays just to offend the Muslims. 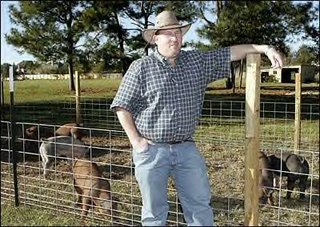 The face of racism, and proud of it.

Craig Baker has threatened to race pigs on the edge of his property on Fridays, the Muslim holy day, in response to a plan to build a mosque near his property.

Many neighborhood residents say they have nothing against Muslims and are more concerned about property values, drainage and traffic.

But one resident has set up an anti-Islamic Web site with an odometer-like counter that keeps track of terrorist attacks since Sept. 11, 2001. A committee has formed to buy another property and offer to trade it for the Muslims’ land. And Craig Baker has threatened to race pigs on the edge of the property on the Muslim holy day. Muslims consider pigs unclean and do not eat pork.

“The neighbors have created havoc for us and we didn’t expect that,” said engineer Kamel Fotouh, president of the 500-member Katy Islamic Association.