Remember, the Money Was There All Along 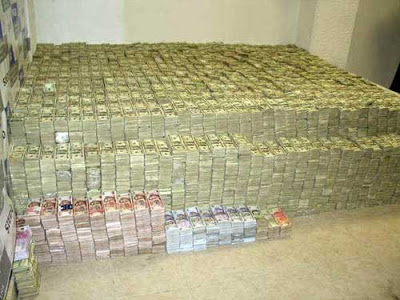 Perhaps the most striking fact revealed by the global financial crash — or rather, by the reaction to it — is the staggering, astonishing, gargantuan amount of money that the governments of the world have at their command.

In just a matter of days, we have seen literally trillions of dollars offered to the financial services sector by national treasuries and central banks across the globe. Britain alone has put $1 trillion at the disposal of the bankers, traders, lenders and speculators; and this has been surpassed by the total package of public money that Washington is shoveling into the financial furnaces of Wall Street and the banks. These radical efforts are being replicated on a slightly smaller scale in France, Germany, Italy, Russia and many other countries.

The effectiveness of this unprecedented transfer of wealth from ordinary citizens to the top tiers of the business world remains to be seen. It will certainly insulate the very rich from the consequences of their own greed and folly and fraud; but it is not at all clear how much these measures will shield the vast majority of people from the catastrophe that has been visited upon them by the elite.

But putting aside for a moment the actual intent, details and results of the global bailout offers, it is their very extent that shocks, and shows — in a stark, harsh, all-revealing light — the brutal disdain with which the national governments of the world’s “leading democracies” have treated their own citizens for decades.

Beginning with Margaret Thatcher’s election in 1979, government after government — and party after party — fell to the onslaught of an extremist faith: the narrow, blinkered fundamentalism of the “Chicago School.” Epitomized by its patron saint, Milton Friedman, the rigid doctrine held that an unregulated market would always “correct” itself, because its workings are based on entirely rational and quantifiable principles. This was of course an absurdly reductive and savagely ignorant view of history, money and human nature; but because it flattered the rich and powerful, offering an “intellectual” justification for rapacious greed and ever-widening economic and social inequality, it was adopted as holy writ by the elite and promulgated as public policy.

This radical cult — a kind of Bolshevism from above — took its strongest hold in the United States and Britain, and was then imposed on many weaker nations through the IMF-led “Washington Consensus” (more aptly named by Naomi Klein as the “Shock Doctrine”), with devastating and deadly results. (As in Yeltsin’s Russia, for example, where life expectancy dropped precipitously and millions of people died premature deaths from poverty, illness, and despair.)

According to the cult, not only were markets to be freed from the constraints placed on them after the world-shattering effects of the Great Depression, but all public spending was to be slashed ruthlessly to the bone. (Although exceptions were always made for the Pentagon war machine.) After all, every dollar spent by a public entity on public services and amenities was a dollar taken away from the private wheeler-dealers who could more usefully employ it in increasing the wealth of the elite — who would then allow some of their vast profits to “trickle down” to the lower orders.

This was the cult that captured the governments of the United States and Britain (among others), as well as the Republican and Democratic parties, and the Conservative and Labour parties as well. And for almost thirty years, its ruthless doctrines have been put into practice. Regulation and oversight of financial markets were systematically stripped away or rendered toothless. Essential public services were sold off, for chump change, to corporate interests. Public spending on anything other than making war, threatening war and profiting from war was pared back or eliminated. Such public spending that did remain was forever under threat and derided, like the remnants of some pagan faith surviving in isolated backwaters.

Year after year, the ordinary citizens were told by their governments: we have no money to spend on your needs, on your communities, on your infrastructure, on your health, on your children, on your environment, on your quality of life. We can’t do those kinds of things any more.

Of course, when talking amongst themselves, or with the believers in the think tanks, boardrooms — and editorial offices — the cultists would speak more plainly: we don’t do those things anymore because we shouldn’t do them, we don’t want to do them, they are wrong, they are evil, they are outside the faith. But for the hoi polloi, the line was usually something like this: Budgets are tight, we must balance them (for a “balanced budget” is a core doctrine of the cult), we just can’t afford all these luxuries, sorry about that.

But now, as the emptiness and falsity of the Chicago cargo cult stands nakedly revealed, even to some of its most faithful and fanatical adherents, we can see that this 30-year mantra by our governments has been a deliberate and outright lie. The money was there — billions and billions and billions of dollars of it, trillions of dollars of it. We can see it before our very eyes today — being whisked away from our public treasuries and showered upon the banks and the brokerages.

Let’s say it again: The money was there all along.

Money to revitalize the nation’s crumbling inner cities, making them safe and vibrant places for businesses and families and communities to grow.

Money to provide decent, affordable and accessible health care to every citizen, to provide dignity and comfort to the elderly, and protection and humane treatment for the mentally ill.

Money to provide affordable higher education to everyone who wanted it and could qualify for it. Money to help establish and sustain local businesses and family farms, centered in and on the local community, driven by the needs and knowledge of the people in the area, and not by the dictates of distant corporations.

Money for affordable, workable public transport systems, for the pursuit of alternative sources of energy, for sustainable, sensible development, for environmental restoration.

Money to support free inquiry in science, technology, health and other areas — research unfettered from the war machine and the drive for corporate profit, and instead devoted to the betterment of human life.

The money for all of this — and much, much more — was there, all along. When they said we couldn’t have these things, they were lying — or else allowing themselves to be profitably duped by the high priests of the market cult. When they wanted a trillion dollars — or three trillion dollars — to wage a war of aggression in Iraq, they found it. Now, when they want trillions of dollars to save the speculators, fraudsters and profiteers of greed in the global market, they suddenly have it.

Who then can believe that these governments could not have found the money for good schools, health care, and all the rest, that they could not have enhanced the well-being and livelihood of millions of ordinary citizens, and helped create a more just and equitable and stable world — if they had wanted to?

This is one of the main facts that ordinary citizens around the world should take away from this crisis: the money to maintain, secure and improve the lives of their families and communities was always there — but their governments, and their political parties, made a deliberate, unforced choice not to use it for the common good. Instead, they subjugated the well-being of the world to the dictates of an extremist cult. A cult of greed and privilege, that preached iron discipline to the poor and the middle-class, but released the rich and powerful from all restrictions, and all responsibility for their actions.

This should be a constant — and galvanizing — thought in the minds of the public in the months and years to come. Remember what you could have had, and how it was denied you by the lies and delusions of a powerful elite and their bought-off factotums in government. Remember the trillions of dollars that suddenly appeared when the wheeler-dealers needed money to cover their own greed and stupidity.

Let these thoughts guide you as you weigh the promises and actions of politicians and candidates, and as you assess the “expert analysis” on economic and domestic policy offered by the corporate media and the corporate-bankrolled think tanks and academics.

And above all, let these thoughts be foremost in your mind when you hear — as you certainly will hear, when (and if) the markets are finally stabilized (at whatever gigantic cost in human suffering) — the adherents of the market cult emerge once more and call for “deregulation” and “untying the hands of business” and all the other ritual incantations of their false and savage fundamentalist faith.

For although the market cult has suffered a cataclysmic defeat in the last few weeks, it is by no means dead. It has 30 years of entrenchment in power to fall back on. And the leader of every major political party in the West has spent their entire political career within the cult’s confines. It has been the atmosphere they breathed, it has been the sole ladder by which they have climbed to prominence. They will be loath to abandon it, once the immediate crisis is past; most will not be able to.

So remember well the lessons of this new October crash: The money to make a better life, to serve the common good, has always been there. But it has been kept from you by deceit, by dogma, by greed, and by the ambition of those who have sold their souls, and betrayed their brothers and sisters, their fellow human creatures, for the sake of privilege and power.

2 Responses to Remember, the Money Was There All Along