Galveston Homeless : Where Will They Go? 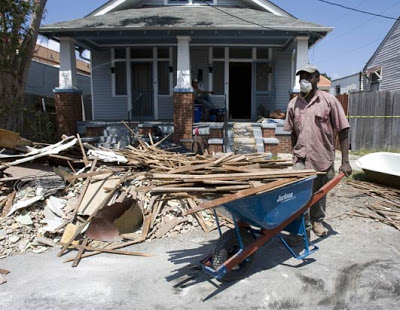 Before Hurricane Ike devastated Galveston Island on the Texas coast, about 60 homeless people spent their nights at the local Salvation Army building. But that building was extensively damaged in the storm and won’t reopen for at least two months — and the people who depended on it may soon have no place to go.

The shelter’s clients are currently living in a Red Cross tent city set up behind a local elementary school, the Galveston Daily News reports. But the tent city is scheduled to close on Oct. 26.

Major Elda Flores, director of the Salvation Army shelter, says she has heard the authorities want to pressure her to reopen soon. But she says that’s impossible because the building has been gutted. The electrical systems have to be replaced, and the flood-damaged first floor will have to be almost completely rebuilt.

At a city news conference held yesterday, it became clear that officials have no idea what will become of Galveston’s homeless when the tent city closes.

This is the latest housing problem to afflict the island’s poor residents since Ike struck a month ago. We recently reported that Galveston’s public housing residents were ordered to leave their homes but were given no answers about where they were supposed to go. Some presumably ended up in the soon-to-be-closed Salvation Army encampment.

The Federal Emergency Management Agency has announced it will launch a program providing rental assistance to families displaced by Ike, but that isn’t set to start until November — a week after the Red Cross tent city is scheduled to close.

This entry was posted in RagBlog and tagged Galveston, Homeless, Hurricane Ike, Texas. Bookmark the permalink.