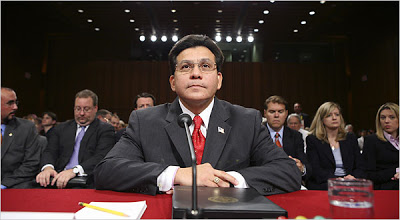 Senior aides to former Attorney General Alberto Gonzales broke the law by using politics to guide their hiring decisions for a wide range of important department positions, slowing the hiring process at critical times and damaging the department’s credibility and independence, an internal report concluded Monday.

The report, prepared by the Justice Department’s inspector general and its internal ethics office, singles out for particular criticism Monica Goodling, a young lawyer from the Republican National Committee who rose quickly through the ranks of the department to become a top aide to Mr. Gonzales.

Ms. Goodling, who testified before Congress in May 2007 at the height of the scandal over the firings of nine United States attorneys, introduced politics into the hiring process in a systematic way that constituted illegal misconduct, the report found.

Last month, the inspector general, Glenn A. Fine, released a separate report that found a similar pattern of politicized hiring at the Justice Department in reviewing applications from young lawyers for the honors and intern programs. The new report released Monday goes much further, however, in documenting pervasive evidence of political hiring for some of the department’s most senior career, apolitical positions, including immigration judges and assistant United States attorneys.

The inspector general’s investigation found that Ms. Goodling and a handful of other senior aides to Mr. Gonzales developed a system of using in-person interviews and Internet searches to screen out candidates who might be too liberal and to identify candidates seen as pro-Republican and supportive of President Bush.

When interviewed by the inspector general, Mr. Gonzales said he was not aware that Ms. Goodling and other aides were using political criteria in their decisions for career positions. Mr. Gonzales resigned last summer in the face of mounting accusations from congressional Democrats that politics had corrupted the department.

His successor, Attorney General Michael Mukasey, said in a statement Monday after the report’s release that he was disturbed by their findings that improper political considerations were used in hiring decisions relating to some career employees.

“I have said many times, both to members of the public and to Department employees, it is neither permissible nor acceptable to consider political affiliations in the hiring of career Department employees,” he said. “And I have acted, and will continue to act, to ensure that my words are translated into reality so that the conduct described in this report does not occur again at the Department.”

He said that over the course of the last year and a half, the Justice Department has made institutional changes to remedy the problems discussed in today’s report.

“It is crucial that the American people have confidence in the propriety of what we do and how we do it,” he said, “and I will continue my efforts to make certain they can have such confidence.”

An attorney for Ms. Goodling, John Dowd, did not return a phone message Monday.

In her position as White House liaison for the Justice Department, Ms. Goodling was involved in hiring lawyers for both political appointments and non-political, career positions. Regardless of the type of position, the report said, Ms. Goodling would run through the same batch of questions, asking candidates about their political philosophies, why they wanted to serve President Bush, and who, aside from Mr. Bush, they admired as public servants. Sometimes, Ms. Goodling would ask: “Why are you a Republican?”

Such questioning was allowed for candidates to political appointments, but was clearly banned under both civil service law and the Justice Department’s own internal policies, the inspector general said. Ms. Goodling’s questioning also generated complaints from one senior official who believed it was improper, long before the issue became a public controversy following the firings of nine United States attorneys. The inspector general concluded that Ms. Goodling knew that questioning applicants to career positions about their political beliefs was improper.

And in another case, colleagues said that Ms. Goodling refused to extend the appointment of a female prosecutor because she believed the lawyer was involved in a lesbian relationship with her supervisor, according to the report.

And in another case cited by the inspector general, Ms. Goodling blocked the hiring of an experienced prosecutor for a senior counter-terrorism position because his wife was active in Democratic politics. The candidate was regarded as “head and shoulders above the other candidates” in the view of officials in the executive office of United States attorneys, but they were forced to take a candidate with much less experience because he was deemed acceptable to Ms. Goodling.

In forwarding a résumé in 2006 from a lawyer who was working for the Federalist Society, Ms. Goodling sent an e-mail message to the head of the Office of Legal Counsel, Steven Bradbury, saying: “Am attaching a résumé for a young, conservative female lawyer.”

Ms. Goodling interviewed the woman herself for possible positions and wrote in her notes such phrases as “pro-God in public life,” and “pro-marriage, anti-civil union.” She was eventually hired as a career prosecutor.

Ms. Goodling also conducted extensive searches on the Internet to glean the political or ideological leanings of candidates for career positions, the report found. She and other Justice Department supervisors would look for key phrases like “abortion,” “homosexual,” “guns,” or “Florida re-count” to get information on a candidate’s political leanings.