Sarah Palin : Soldiers in Iraq on ‘Task From God’ 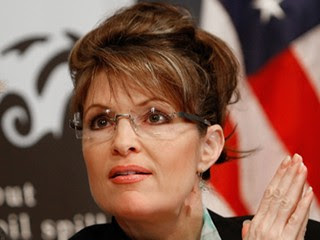 I find this very, very disturbing.

Sarah Palin, her church and her messianic world view
By Nico Pitney and Sam Stein / September 2, 2008

Three months before she was thrust into the national political spotlight, Gov. Sarah Palin was asked to handle a much smaller task: addressing the graduating class of commission students at her one-time church, Wasilla Assembly of God.

Her speech in June provides as much insight into her policy leanings as anything uncovered since she was asked to be John McCain’s running mate.

Speaking before the Pentecostal church, Palin painted the current war in Iraq as a messianic affair in which the United States could act out the will of the Lord.

“Pray for our military men and women who are striving to do what is right. Also, for this country, that our leaders, our national leaders, are sending [U.S. soldiers] out on a task that is from God,” she exhorted the congregants. “That’s what we have to make sure that we’re praying for, that there is a plan and that that plan is God’s plan.”

Religion, however, was not strictly a thread in Palin’s foreign policy. It was part of her energy proposals as well. Just prior to discussing Iraq, Alaska’s governor asked the audience to pray for another matter — a $30 billion national gas pipeline project that she wanted built in the state. “I think God’s will has to be done in unifying people and companies to get that gas line built, so pray for that,” she said.

Palin’s address, much of which was spent reflecting on the work of the church in which she grew up and was baptized, underscores the notion that her world view is deeply impacted by religion. In turn, her remarks raise important questions: mainly, what is Palin’s faith and how exactly has it influenced her policies?

A review of recorded sermons by Ed Kalnins, the senior pastor of Wasilla Assembly of God since 1999, offers a provocative and, for some, eyebrow-raising sketch of Palin’s longtime spiritual home.

The church runs a number of ministries providing help to poor neighborhoods, care for children in need, and general community services. But Pastor Kalnins has also preached that critics of President Bush will be banished to hell; questioned whether people who voted for Sen. John Kerry in 2004 would be accepted to heaven; charged that the 9/11 terrorist attacks and war in Iraq were part of a war “contending for your faith;” and said that Jesus “operated from that position of war mode.”

It is impossible to determine how much Wasilla Assembly of God has shaped Palin’s thinking. She was baptized there at the age of 12 and attended the church for most of her adult life. When Palin was inaugurated as governor, the founding pastor of the church delivered the invocation. In 2002, Palin moved her family to a nondenominational church, but she continues to worship at a related Assembly of God church in Juneau.

Moreover, she “has maintained a friendship with Wasilla Assembly of God and has attended various conferences and special meetings here,” Kalnins’ office said in a statement. “As for her personal beliefs,” the statement added, “Governor Palin is well able to speak for herself on those issues.”

Clearly, however, Palin views the church as the source of an important, if sometimes politically explosive, message. “Having grown up here, and having little kids grow up here also, this is such a special, special place,” she told the congregation in June. “What comes from this church I think has great destiny.”

And if the political storm over Barack Obama’s former pastor Jeremiah Wright is any indication, Palin may face some political fallout over the more controversial teachings of Wasilla Assembly of God.

If the church had a political alignment, it would almost surely be conservative. In his sermons, Kalnins did not hide his affections for certain national politicians.

During the 2004 election season, he praised President Bush’s performance during a debate with Sen. John Kerry, then offered a not-so-subtle message about his personal candidate preferences. “I’m not going tell you who to vote for, but if you vote for this particular person, I question your salvation. I’m sorry.” Kalnins added: “If every Christian will vote righteously, it would be a landslide every time.”

Months after hinting at possible damnation for Kerry supporters, Kalnins bristled at the treatment President Bush was receiving over the federal government’s handling of Hurricane Katrina. “I hate criticisms towards the President,” he said, “because it’s like criticisms towards the pastor — it’s almost like, it’s not going to get you anywhere, you know, except for hell. That’s what it’ll get you.”

Much of his support for the current administration has come in the realm of foreign affairs. Kalnins has preached that the 9/11 attacks and the invasion of Iraq were part of a “world war” over the Christian faith, one in which Jesus Christ had called upon believers to be willing to sacrifice their lives.

What you see in a terrorist — that’s called the invisible enemy. There has always been an invisible enemy. What you see in Iraq, basically, is a manifestation of what’s going on in this unseen world called the spirit world. … We need to think like Jesus thinks. We are in a time and a season of war, and we need to think like that. We need to develop that instinct. We need to develop as believers the instinct that we are at war, and that war is contending for your faith. … Jesus called us to die. You’re worried about getting hurt? He’s called us to die. Listen, you know we can’t even follow him unless you are willing to give up your life. … I believe that Jesus himself operated from that position of war mode. Everyone say “war mode.”

Now you say, wait a minute Ed, he’s like the good shepherd, he’s loving all the time and he’s kind all the time. Oh yes he is — but I also believe that he had a part of his thoughts that knew that he was in a war.
As for his former congregant and current vice presidential candidate, Kalnins has asserted that Palin’s election as governor was the result of a “prophetic call” by another pastor at the church who prayed for her victory. “[He made] a prophetic declaration and then unfolds the kingdom of God, you know.”

Even Palin expressed surprise at that pastor’s advocacy for her candidacy. “He was praying over me,” she said in June. “He’s praying, ‘Lord make a way, Lord make a way…’ And I’m thinking, this guy’s really bold, he doesn’t even know what I’m gonna do, he doesn’t know what my plans are, and he’s praying not, ‘Oh Lord, if it be your will may she become governor,’ or whatever. No, he just prayed for it. He said, ‘Lord, make a way, and let her do this next step.’ And that’s exactly what happened. So, again, very very powerful coming from this church.”

In his sermons, Pastor Kalnins has also expressed beliefs that, while not directly political, lie outside of mainstream Christian thought.

He preaches repeatedly about the “end times” or “last days,” an apocalyptic prophesy held by a small but vocal group of Christian leaders. During his appearance with Palin in June, he declared, “I believe Alaska is one of the refuge states in the last days, and hundreds of thousands of people are going to come to the state to seek refuge and the church has to be ready to minister to them.”

He also claims to have received direct “words of knowledge” from God, providing him information about past events in other people’s lives. During one sermon, he described being paired with a complete stranger during a golf outing. “I said, I’m a minister from Alaska and I want you to know that your wife left you — you know that your wife left you and that the Lord is gonna defend you in a very short time, and it wasn’t your fault. And the man drops his clubs, he literally was about to tee off and he dropped his clubs, and he says, ‘Who the blank are you?’ And I says, ‘well, I’m a minister.’ He says, ‘how do you know about my life? What do you know?’ And I started giving him more of the word of knowledge to his life and he was freaked out.”

Kalnins has, of course, preached on a bevy of topics ranging from humility to “overcoming bitterness.” But the more controversial remarks reported above were not out of the norm, appearing in numerous sermons spanning the four years of available recordings.

As for Palin, her views on these topics is more opaque. In the wake of the controversy over Jeremiah Wright, a debate has raged about whether political figures should be held responsible for the comments of their religious guiders. Clearly, however, Kalnins, like many national conservative religious leaders, sees Alaska’s governor as one of his own. “Gov. Sarah Palin is the real deal,” he told his church this past summer. “You know, some people put on a show…but she’s the real deal.”