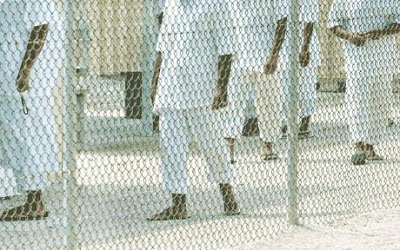 U.S. District Judge Ricardo Urbina is to decide where in the U.S. the men can be released. The Pentagon cleared most of them of wrongdoing four years ago.

WASHINGTON — For the first time, a federal judge has ordered the Bush administration to release prisoners held at the U.S. military facility at Guantanamo Bay, Cuba, ruling Tuesday that 17 Chinese Muslims must be brought to his courtroom by the end of the week so that they can be set free.

U.S. District Judge Ricardo M. Urbina said that the government’s authority to hold the men had “ceased” and that they were entitled to be released.

He said he would hold a hearing to decide on the conditions for releasing the men. Several religious and social groups, including 20 church leaders from Tallahassee, Fla., said they would help the men resettle in their community.

The 17 are Uighurs who fled persecution in the far western reaches of China. U.S. authorities, fearing what Chinese officials would do, have refused to send them back to China, and no other country has been willing to take them.

The judge’s order came more than six years after the men were sent to Guantanamo and more than four years after the Pentagon cleared most of them to be released. The Supreme Court ruled four months ago that judges can order the release of prisoners wrongly held at Guantanamo.

Soon thereafter, a federal appeals court reviewed the case of one of the Uighurs, Huzaifa Parhat, and ruled that the government had no basis for believing he was an “enemy combatant.” That decision set the stage for Urbina’s ruling Tuesday.

“This is a historic day for the United States,” said Emi MacLean, a lawyer for the Center for Constitutional Rights. “Finally, we are beginning the process of taking responsibility for our mistakes and fixing them.”

But Bush administration lawyers have insisted that judges have no authority to interfere with the handling of foreign military prisoners. On Tuesday, they also argued that immigration laws prohibit the release into the United States of individuals alleged to have terrorist ties and asked for an emergency order to block the release.

Administration officials “are deeply concerned by and strongly disagreed with” the decision to release the men, White House Press Secretary Dana Perino said in a statement.

Human rights lawyers have described the 17 Uighurs as among the most egregious examples of wrongful imprisonment at Guantanamo. Natives of an area they call East Turkistan, the Uighurs fled from oppression by the Chinese government, including its policy of forced abortions, and settled in Afghanistan in 2001.

But after U.S. bombing raids hit their camps, they fled to Pakistan, where they were taken into custody by locals, who turned them over to U.S. troops offering $5,000 bounties for suspected foreign fighters. The U.S. military alleged that the Uighurs had received military training, and they were suspected of ties to the East Turkistan Islamic Movement, which the State Department had designated a terrorist group.

But the Uighurs strongly denied any ties to the Taliban, Al Qaeda or other enemies of the United States; their only enemy, they said, was the government of China. They said they had initially welcomed being in U.S. custody, hoping they would be safe and treated humanely.

Instead, 22 Uighurs were imprisoned at Guantanamo Bay in 2002. Five were released and sent to Albania two years ago, but the rest remained in custody because no country was willing to accept them. Lawyers spent years in court arguing for their release.

“The U.S. government has long recognized these men did not pose, and really never posed, a threat to the United States,” said Jennifer Daskal, a lawyer for Human Rights Watch. Tuesday’s ruling was significant, she said, because a judge “rejected the Bush administration’s theory that its own determination can trump judicial review and constitutional rights.”

Neil McGaraghan, a Boston lawyer who worked on the Uighurs’ case, said the men would be released from military custody Friday, barring a last-minute order from the appellate court.

Since 2002, the Pentagon has approved the release of more than 500 prisoners from Guantanamo, including the five Uighurs sent to Albania. More than 250 are still being held, including about 60 who would be freed if the U.S. government could find countries willing to take them.

This entry was posted in RagBlog and tagged Criminal Justice, Guantanamo, War on Terror. Bookmark the permalink.