Surprise! You Can’t Trust Any of Them! 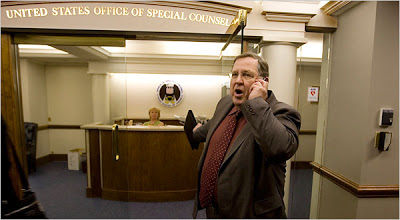 Jim Mitchell, communications director for the Office of the Special Counsel, in Washington on Tuesday. Photo by J. Scott Applewhite/AP.
F.B.I. Raids Office of Special Counsel
By David Stout / May 7, 2008

WASHINGTON — The office of the official responsible for protecting federal workers from political interference was raided by F.B.I. agents on Tuesday as part of an investigation into whether he himself mixed politics with official business.

The raid took place at the office of Scott J. Bloch, the head of the Office of Special Counsel. Computers and documents were seized by agents trying to determine whether Mr. Bloch obstructed justice by hiring an outside company to “scrub” his computer files, The Associated Press reported. Investigators also searched Mr. Bloch’s home in suburban Virginia after obtaining a subpoena.

“It is not clear to us what they are searching for,” James Mitchell, a spokesman for the office, told Reuters. “We are cooperating with law enforcement.” Mr. Mitchell said about 20 agents from the Federal Bureau of Investigation took part in the raid.

The Office of Special Counsel gives advice to federal employees on which activities are proper and which are not allowed under the Hatch Act, which is supposed to guard against direct political interference in governmental affairs. Mr. Bloch’s duties including shielding whistle-blowers who disclose such political meddling.

Mr. Bloch was in the news a year ago when his office began to look into political briefings given to employees of several agencies by aides to Karl Rove, who was then President Bush’s chief political adviser. The White House insisted at the time that the briefings met the definitions of allowable activities.

Mr. Bloch’s critics quickly accused him of announcing an inquiry into the Rove-inspired briefings simply to draw attention away from his own shortcomings. At the time, he was the target of a complaint filed by a group of employees who accused him of trying to dismantle his own agency, of illegally barring employees from talking to journalists and of reducing a backlog of whistle-blower complaints by simply discarding old cases.

Mr. Bloch has denied wrongdoing. Last week, the White House forced out Lurita A. Doan, the head of the General Services Administration, after Mr. Bloch’s office determined that she had improperly mixed politics with government business. Mr. Bloch was nominated for his post by President Bush on June 26, 2003. He was unanimously confirmed by the Senate on Dec. 9, 2003, and sworn in to a five-year term on Jan. 5, 2004. His agency’s Web site states that he has more than 17 years’ experience litigating “employment, lawyer ethics, and complex cases before state courts, federal courts and administrative tribunals.”

The agency’s Web site praises conscientious rank-and-file federal employees, “the great heroes, ordinary heroes who have the courage to blow the whistle, who are helping to bring our government to greater accountability.”