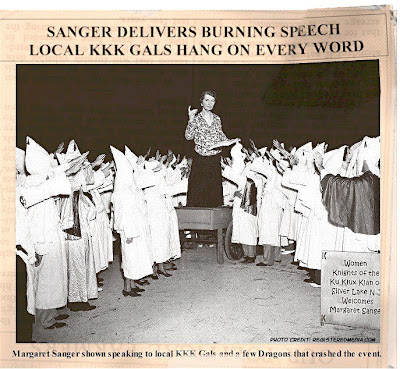 Photo from registeredmedia.com.
KKK to Tea Parties:
Communicating with the ignorant and angry

If angry outbursts and placard waving protesters against health care reform seem heated today, the idea of planned parenthood and birth control in the early 1900’s caused a raging bonfire.

Margaret Sanger, an activist way ahead of her time, is credited with starting the idea of planned parenthood. Over the years she was arrested more than eight times for expressing her ideas back when speaking out in public in favor of birth control was illegal. She did time in jail in 1916 nine days after opening America’s first birth control and family planning clinic in Brooklyn.

But Margaret Sanger’s message also supported “negative eugenics” saying, “It is a vicious cycle; ignorance breeds poverty and poverty breeds ignorance. There is only one cure for both, and that is to stop breeding these things.”

So, like a modern day Sibyl, her pronouncements could be interpreted by opposing sides, each opting either to hear the positive germ of her message, or to embrace the radical edges of some of her statements as pillars of support for their views… including white supremacy.

In the mid 1920’s she received more than a million letters requesting information on birth control. And she spoke from coast to coast to diverse groups including “cotton workers, churchmen, liberals, socialists, scientists, civic clubs, and fashionable, philanthropically minded women.”

In 1926, she was invited to speak to the ladies axillary of the Ku Klux Klan in Silver Lake, New Jersey. After being driven in a curtain shuttered car for almost an hour, way out into a country field, she gave a lecture to the robed and hooded ladies, as well as a smattering of male Klansmen. In her memoirs she described it as “one of the weirdest experiences I had in lecturing,” noting that she was forced to use only “the most elementary terms, as though I were trying to make children understand.” The KKK ladies and their male attendees were reportedly delighted with the idea of promoting birth control for ‘the colored folks.’

Though she remains to this day a controversial figure it is interesting to note that as the nation became more enlightened, birth control and family planning became accepted, championed by the Rockefeller, Jr.’s Bureau of Social Hygiene. In spite of allegations of racism, she earned the respect and support of of civil rights leaders such as Martin Luther King, Jr. and the American Humanist Association named her Humanist of the Year in 1957.

Today President Barack Obama has undertaken the tough task of renewing a demand for universal health insurance legislation for all Americans. For seventy years political manipulation, crass profit incentives of big business and a whipped up mistrust of “big government” as a convenient devil has blocked health care reform legislation.

Medicare health insurance for our senior citizens finally passed in 1965 after years of being protested and assailed as “socialist” and a “government takeover” by conservative Republicans adverse to any change. A high percentage of today’s protesters have Medicare cards in their pockets.

The busloads of well fed white folks who angrily waved placards in the nation’s capitol last week probably didn’t pay for their bus tickets and their mental carry on baggage was not packed with reasoned ideology based upon clear fact. Rather, it was stuffed with anger, startling ignorance of the facts and, worse, their willingness to believe such political purée.

It is daily becoming more and more clear that much, but not all, of what we are seeing is driven by simmering racism, the idea that the most powerful man in the world, the President of the USA is not a white man. That a black skinned (his white half doesn’t seem to count), calm, educated and persuasive man is deciding what will happen to THEM!

The busloads arriving in Washington D.C. and in the town hall meetings, were all for the most part provided a free ride and a sense of indignant importance, banding together to hate, vent frustration and spout utter nonsense. With Rush Limbaugh, Fox News and the endless babble of knee-jerk talking heads on cable TV, the ignorant are rewarded for their ignorance. They are delighted to hear what they want to hear fed to them daily.

Also, today’s so-called “Tea Parties” which have no relationship whatsoever to the reasons for the Boston Tea Party are a sad testament in themselves to the ignorance of most of the shouting sign carriers of what the historic “Tea Party” actually was. Similarly, a large number of those screaming “Socialist” would, I will wager, be unable to define what a socialist is. But by God, they are mad!

Today’s disgruntled race baiting demonstrators aren’t wearing robes or hoods. Most also are not armed with facts or reasoned opposition. They are armed with anger, wild rumors and a sense of empowerment that harks back some 40 some odd years ago when this same mentality produced sneers and shouts of “Boy!” to make a black move off the sidewalk, or to those who carried “no nigger” placards outside public schools as police dogs strained at their leashes as small black children walked past. Fine law-abiding, church going folks then … and now.

This minority of our citizenry has long been hijacked for cynical purposes. They present a golden opportunity for the struggling, discredited conservative Republican base to recruit and inflame the bigoted and ignorant with poisoned misinformation.

Though this righteous mob is making the most noise and is getting the media coverage that would be bestowed on a fully grown two-headed mule, our elected representatives must hear the louder voice of reason from the overwhelmingly reasonable majority. Maybe it would help if we speak to them “in the most elementary terms, as though we were trying to make children understand.”

18 Responses to The Righteous Mob : Like Talking to Children