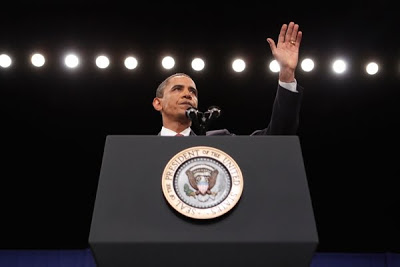 President Barack Obama announces his escalation of the War in Afghanistan at the US Military Academy at West Point, N.Y., on Tuesday night. Photo by Charles Dharapak / AP.
The War President at West Point:
Great speech, bad message

Last night, President Obama spoke to the nation about the continuing occupation of and war in Afghanistan. As usual, he gave a great speech. He continually proves himself to be one of our country’s finest public speakers. Unfortunately, underneath the rhetorical excellence there was little that made much sense.

I should have known it would be like that, because he opened by talking about Iraq as though that conflict was over and great things had been accomplished there. But that is not the reality. The killings continue there, and the government can’t even agree on a new election law and therefore can’t hold scheduled elections. Our troops still have at least two remaining years in that country and possibly even longer. Success, whatever that is, is still a long way from being a reality in Iraq.

The president has now decided that all we need to succeed in Afghanistan is another 30,000 troops. He believes this will allow us to stop Taliban advances, pacify the countryside and eliminate al-Queda. It seems he has become a master of wishful thinking.

While the troop surge may temporarily halt further advances by the Taliban, it is not nearly enough to pacify the country outside of urban areas (and I suspect bombings will continue even in the urban areas). The fact is that once you get outside of Kabul, the people simply don’t like or trust the central government.

And training more Afghan troops that answer to the central government will not solve that problem. President Karzai has proven himself to be a corrupt leader who’s reelection was obtained through massive fraud. In addition, his brother is the largest opium poppy grower and dealer in the country.

We are in the process of making the same mistake in Afghanistan that we made in Vietnam. We are supporting a corrupt leader and trying to convince the people, or force them, to also support that leader. It didn’t work in Vietnam, and it won’t work in Afghanistan. Just because a foreign leader is friendly to the U.S. and its goals, does not mean he is worthy of or capable of winning the people’s support.

Then we come to the matter of al-Queda. A troop surge of 30,000 will do nothing to eliminate al-Queda. They are snugly entrenched in Pakistan and our troops cannot even enter that country. To truly eliminate al-Queda and the Taliban, we would need to not only occupy Afghanistan, but also invade Pakistan. That is neither militarily nor diplomatically possible.

The only bit of good news from the president last night was when he said our involvement in Afghanistan was not an open-ended one. He expects the central government there, as weak and corrupt as it is, to be able to take over the fight on their own in about a year and a half. He wants to begin withdrawing troops in the summer of 2011.

But note he said “begin” to withdraw. He gave no assurance that our troops would be out of Afghanistan in 2011. He also didn’t tell us what would happen if the situation wasn’t any better by the summer of 2011. Would there be another troop surge and another “deadline”?

I’m afraid we’re still in the middle of quagmires in both Iraq and Afghanistan, and sending more troops to either will not solve the problem. We should have learned in Vietnam, that it’s almost impossible to win a guerrilla war in someone else’s country.

Since we haven’t yet learned that lesson, we are now doomed to a repeat of history (and more dead American soldiers).

8 Responses to The War President : Barack Obama at West Point