U.S. Law : Those Who Authorized Torture MUST Be Prosecuted 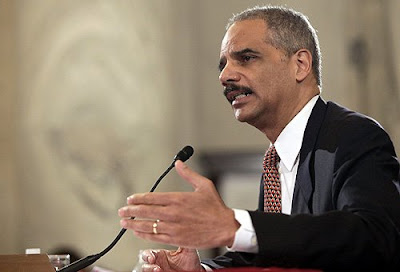 Attorney General-designate Eric Holder (shown testifying at hearings on Capitol Hill):”No one is above the law.” Photo by Evan Vucci / AP.

It’s rather difficult to understand how people think that we’re going to ‘send a message to the world’ about the restoration of American values as we deliberately protect the people who have systematically tortured and thereby transparently violate the core provisions of this Convention.

It seems fairly easy — even for those overtly hostile to the basic rules of logic and law — to see what conclusions are compelled by these clear premises:

Bush administration officials from Vice President Dick Cheney on down signed off on using harsh interrogation techniques against suspected terrorists after asking the Justice Department to endorse their legality, The Associated Press has learned.

The officials also took care to insulate President Bush from a series of meetings where CIA interrogation methods, including waterboarding, which simulates drowning, were discussed and ultimately approved. . . .

The administration of US President George W. Bush authorized the CIA to waterboard Al-Qaeda suspects according to two secret memos issued in 2003 and 2004, The Washington Post reported Wednesday.

Early on he was asked whether waterboarding, a technique that makes a prisoner believe he is in danger of drowning, constitutes torture and is illegal.

“If you look at the history of the use of that technique, ” Holder replied, “we prosecuted our own soldiers for using it in Vietnam. . . . Waterboarding is torture.”

The top Bush administration official in charge of deciding whether to bring Guantanamo Bay detainees to trial has concluded that the U.S. military tortured a Saudi national who allegedly planned to participate in the Sept. 11, 2001, attacks, interrogating him with techniques that included sustained isolation, sleep deprivation, nudity and prolonged exposure to cold, leaving him in a “life-threatening condition.”

“We tortured [Mohammed al-] Qahtani,” said Susan J. Crawford, in her first interview since being named convening authority of military commissions by Defense Secretary Robert M. Gates in February 2007. “His treatment met the legal definition of torture. And that’s why I did not refer the case” for prosecution.”

“Torture is a crime,” Mr. Mukasey said in an interview Friday . . .

.CONVENTION AGAINST TORTURE and Other Cruel, Inhuman or Degrading Treatment or Punishment ( signed by the U.S. under Ronald Reagan):

1. Each State Party shall take effective legislative, administrative, judicial or other measures to prevent acts of torture in any territory under its jurisdiction.

2. No exceptional circumstances whatsoever, whether a state of war or a threat or war, internal political instability or any other public emergency, may be invoked as a justification of torture.

3. An order from a superior officer or a public authority may not be invoked as a justification of torture. . . .

1. Each State Party shall ensure that all acts of torture are offences under its criminal law. The same shall apply to an attempt to commit torture and to an act by any person which constitutes complicity or participation in torture.

1. The State Party in territory under whose jurisdiction a person alleged to have committed any offence referred to in article 4 is found, shall in the cases contemplated in article 5, if it does not extradite him, submit the case to its competent authorities for the purpose of prosecution.

Each State Party shall ensure that any statement which is established to have been made as a result of torture shall not be invoked as evidence in any proceedings, except against a person accused of torture as evidence that the statement was made.

These premises — conclusively established by undisputed news reports and the statements of the person about to become the country’s top law enforcement officer as well as a top Bush official — are clear, and the conclusions they compel are inescapable. The Bush administration authorized, ordered and practiced torture. The U.S., under Ronald Reagan, legally obligated itself to investigate and prosecute any acts of torture committed by Americans (which includes authorization of torture by high level officials and also includes, under Article 3 of the Convention, acts of “rendering” detainees to countries likely to torture, as the Bush administration unquestionably did).

All of the standard excuses being offered by Bush apologists and our political class (a virtual redundancy) — namely: our leaders meant well; we were facing a dangerous enemy; government lawyers said this could be done; Congress immunized the torturers; it would be too divisive to prosecute — are explicitly barred by this treaty (i.e., binding law) as a ground for refusing to investigate and prosecute acts of torture.

This is also why the standard argument now being offered by Bush apologists (such as University of Chicago Law Professor Eric Posner, echoing his dad, Court of Appeals Judge Richard Posner in Chicago) as to why prosecutions are unnecessary — namely: there is “prosecutorial discretion” that should take political factors into account in order not to prosecute — are both frivolous and lawless. The Convention explicitly bars any such “discretion”: “The State Party in territory under whose jurisdiction a person alleged to have committed any offence referred to in article 4 is found, shall . . . submit the case to its competent authorities for the purpose of prosecution.” The principal purpose of the Convention is to remove the discretion involved in prosecuting acts of torture and to bar the very excuses which every torturing society proffers and which our own torturing society is now attempting to invoke (“we were dealing with real threats; there were ‘exceptional circumstances’ that justified it; we enacted laws legalizing the torture; our leaders meant well; we need to move on”).

International treaties which the U.S. signs and ratifies aren’t cute little left-wing platitudes for tying the hands of America. They’re binding law according to the explicit mandates of Article VI of our Constitution. Thus, there simply is no way to (a) argue against investigations and prosecutions for Bush officials and simultaneously (b) claim with a straight face to believe in the rule of law, that no one is above the law, and that the U.S. should adhere to the same rules and values it attempts to impose on the rest of the world. Last week, Paul Krugman stated about as clearly as possible why this is so:

I’m sorry, but if we don’t have an inquest into what happened during the Bush years — and nearly everyone has taken Mr. Obama’s remarks to mean that we won’t — this means that those who hold power are indeed above the law because they don’t face any consequences if they abuse their power.

It’s just as simple as that. Once Eric Holder stated unequivocally that waterboarding is torture, and once a top Bush official used the word “torture” to describe what the U.S. did at Guantanamo using authorized techniques other than waterboarding, the “discretion” to investigate and prosecute disappeared– at least for people who believe in the most basic precepts of the rule of law and equality under it, Western principles of justice established at Nuremberg, and the notion that the U.S. is bound by the treaties it signs. There simply is no way to argue against investigations and prosecutions (and no way to argue that we should use torture-obtained evidence against Guantanamo detainees) without fully rejecting all of those principles.

While many Americans, especially American political elites, may be eager to overlook the implications of immunizing Bush officials for these crimes (as citizens typically are eager to avoid having their leaders branded as torturers and war criminals), it’s rather difficult to understand how people think that we’re going to “send a message to the world” about the restoration of American values as we deliberately protect the people who have systematically tortured and thereby transparently violate the core provisions of this Convention. Doesn’t that conduct rather clearly send the exact opposite message?

It seems to me that these facts imply that if Barack Obama, or his administration, believe that there are reasonable grounds to believe that members of the Bush administration have committed torture, then they are legally obligated to investigate; and that if that investigation shows that acts of torture were committed, to submit those cases for prosecution, if the officials who committed or sanctioned those acts are found on US territory. If they are on the territory of some other party to the Convention, then it has that obligation. Under the Convention, as I read it, this is not discretionary. And under the Constitution, obeying the laws, which include treaties, is not discretionary either.

It’s just not possible to argue with that. In light of Holder’s testimony, the “if” component of Hilzoy’s argument — “if Barack Obama, or his administration believe that there are reasonable grounds to believe that members of the Bush administration have committed torture . . . .” — is now a certainty. In Slate, Dahlia Lithwick and Phillipe Sands made a similar argument regarding Bush official Susan Crawford’s statement that the U.S. “tortured” Mohammed al-Qahtani: “These states [who are parties to the Convention] must take any person alleged to have committed torture (or been complicit or participated in an act of torture) who is present in their territories into custody. The convention allows no exceptions.”

While those who argue that the U.S. was right to torture because it’s the U.S. that did it are expressing a repugnant form of exceptionalism, at least they’re being honest — far more so than those who argue that Bush officials shouldn’t be investigated or prosecuted while paying deceitful lip service to “the rule of law” and the idea that “no one is above the law.”

Several commenters note, correctly, that the U.S. Senate, in 1994, ratified the Convention by specifying that its provisions were not self-executing, but instead, required specific legislation implementing its provisions. As this 2004 Report from the Congressional Research Service (.pdf) details (beginning at page CRS-4), Congress enacted legislation to do exactly that, with minor reservations not relevant to the argument here.

2 Responses to U.S. Law : Those Who Authorized Torture MUST Be Prosecuted