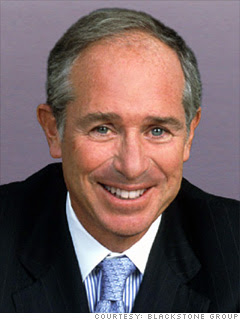 Steve Schwarzman, Chairman and CEO Blackstone Group (BX)
2007 Total compensation: $350.7 million
I wonder why Paulsen didn’t hit upon the billionaires and the 25 HIGHEST PAID MEN IN THIS COUNTRY for that money!
By Diane Stirling-Stevens / The Rag Blog / October 5, 2008

Check this link; you’ll see some of his ‘cronies’ are among the HIGHEST PAID MEN IN THIS COUNTRY. Shit, they could have easily raised $700 or $850 billion just among themselves – using America’s taxpayers to bail out the shit they created, while seriously being over-paid! What in the hell is this all about, and when are we going to stop shooting ourselves in the foot by falling prey to our own greed; weakness, and failure to live prudently….

In so many ways, we are just as ‘guilty’ of being tempted, as those who clearly have tempted us and succeeded.

This entry was posted in RagBlog and tagged Bank Bailouts, Capitalism. Bookmark the permalink.