Posted on September 1, 2014 by Thorne Dreyer 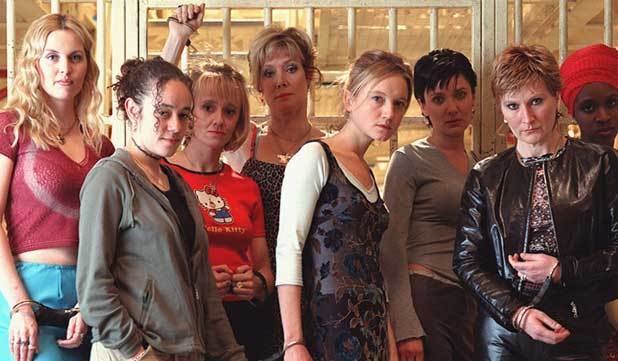 Bad Girls. Lots of them.

I am very interested in the topic of female incarceration, and I write a blog article about it every third week at Humane Exposures. I loved both seasons of Netflix’s powerful women-in-prison drama Orange is the New Black, and a dozen or so years ago I watched and enjoyed the first riveting season of the dramatic British TV series, Bad Girls. Here’s the first part of an episode (and from it you can access the remaining parts).

In Britain, Bad Girls was very popular, running for eight seasons and 107 episodes, from 1999 to 2006. It is set in the fictional Larkhall women’s prison and features a mix of gritty and light storylines. Simone Lahbib, Debra Stephenson, Claire King, and Lara Cazalet star in this shockingly honest British series where the new inmates must quickly learn how to survive in a brutal and often deadly environment.

Bad Girls deals with much controversial subject matter. In the first season a pregnant prisoner miscarries in her cell, another is viciously strip-searched by fellow inmates for concealed drugs and a third commits suicide due to being bullied.

One story arc revolves around the developing romantic relationship between a prisoner serving a life sentence for the murder of a policeman who attempted to rape her girlfriend and the previously engaged female Wing Governor. Other storylines include the pregnancy of a young drug addict, the appeal of wrongly-imprisoned woman (frequently referred to as “posh bitch” by other characters) and the illicit relationship between the male senior officer and the resident bully and drug dealer, serving life for murder.

At imdb.com, 92.6% viewers polled gave the series thumbs-up, 44.8%rated it a perfect 10, and it was very strong with all demos, particularly females and most particularly with females 45 and older. The first episodes of seasons two and three drew more than 9.4 million viewers in a relatively small country. 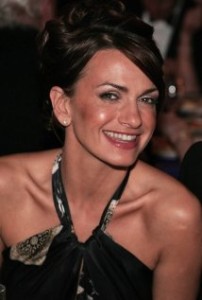 It was created by Maureen Chadwick (who wrote 24 episodes and won a TV Quick Best New Drama Award for Waterloo Road), Ann McManus (penned 23 episodes and co-created Waterloo Road) and Eileen Gallagher (won an OBE honor for services to broadcasting). The series had 23 writers over its eight seasons.

The cast was headed by Victoria Alcock (Call the Midwife, Eastenders, The House of Eliott) and Kika Mirylees (Jonathan Creek, Eastenders, and Lovejoy). Wonderfully evil is sexy Debra Stephenson (Playing the Field, MI-5, and Coronation Street).

Jack Ellis, who won a best actor award for playing a mean, randy guard, has 55 other credits, including Prime Suspect, Inspector Morse, and Coronation Street. Simone Lahbib took over the female lead in the wonderful crime series Wire in the Blood and also appeared in the equally wonderful Philomena and Downton Abbey. And I greatly enjoyed Lara Cazalet as the adulterous barrister in New Street Law.

A musical comedy adaptation of Bad Girls, based on the characters and storylines of the first season, ran in London’s West End in 2007. In 2006 it was announced that FX would bring an American version of Bad Girls to U.S. screens, but its original pilot script was scrapped over the show’s “really gritty and unpleasant” feel. An NBC version was also mentioned in the trade press. But now HBO’s version of Bad Girls is being developed with creative input from Six Feet Under writer Alan Ball, and it is supposedly due to bow this year. The DVD has been released in at least 19 countries, including Montenegro, Georgia, Finland, and New Zealand.

Although I loved and heartily recommend Orange is the New Black, I found my one season of Bad Girls even grittier and more dramatic.