A Manchester cop in 2006 goes into a coma after an auto accident and finds himself in 1973, where crime solving is very different. 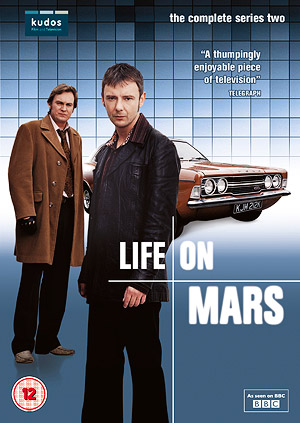 The original BBC version of Life on Mars.

In 2006 and 2008 the series twice won the International Emmy Award for Best Drama Series. In January 2007, it won the Best New Program category as part of the Broadcast Magazine awards. In March 2007 it won in two categories, Best Drama Series and the Writers’ Award, at the Broadcasting Press Guild Awards. The program also won the BAFTA audience-voted “Pioneer Award.” In October 2007, series two was nominated as the Most Popular Drama at the 2007 National Television Awards.

Both seasons and all 16 episodes are on Netflix and some are on You Tube.

Manchester Detective Chief Inspector Sam Tyler is thrust from 2006 to 1973 after a traffic accident. As he continues to work cases at the same police station from 33 years later, Tyler wonders whether he’s insane, is in a coma, or has really traveled through time.

Each episode begins with: “My name is Sam Tyler. I had an accident and I woke up in 1973. Am I mad, in a coma or back in time? Whatever’s happened, it’s like I’ve landed on a different planet. Maybe if I can work out the reason, I can get home…”

Tyler finds himself working under the command of old-style boss Gene Hunt (Philip Glenister). The methodology and techniques of modern policing that Sam Tyler employs during Life on Mars lead him into frequent clashes with other characters. Gene Hunt and the rest of the Criminal Investigation Division appear to favor brutality and corruption in order to secure convictions, as shown by their willingness to physically coerce confessions and fabricate evidence.

Throughout both series, Tyler clashes with Hunt most frequently, usually because Tyler values forensic evidence whereas Hunt often resorts to traditional methods and gut instincts. Sam describes Hunt as an “overweight, over-the-hill, nicotine-stained, borderline alcoholic homophobe with a superiority complex and an unhealthy obsession with male bonding.” Hunt is supported by his fiercely loyal subordinates, Chris Skelton (Marshall Lancaster) and Ray Carling (Dean Andrews), with the latter portrayed as a character similar to Hunt.

Throughout the course of Life on Mars, Sam’s uncertainty is reinforced by frequent paranormal phenomena, such as hearing voices and seeing images from 2006 on radios, telephones, and televisions. The voices discuss his medical condition, leading him to partially believe that he is in a coma. Other elements suggest to him that he is insane, such as his frequent and unexpected encounters with a Test Card Girl who speaks directly to him.

Police colleague Annie Cartwright partially persuades Sam that he is truly in 1973, arguing that his mind would be unable to fabricate the amount of detail in the world where he finds himself.

In most episodes, the main plot centers on a particular crime or case relating to the police, such as drug trafficking, a hostage situation, murders, and robberies. For this reason, most episodes follow a conventional police drama format. As the series progresses, Sam focuses on how he will get home in almost every episode.

Sam also encounters people whom he knows in the future, as their younger selves, including suspects, friends, his own parents and himself as a child. Sam comes from a politically correct and scientifically advanced era, in which suspects’ rights and the preservation of forensic evidence are stringently observed. His background leads Sam into conflict, as other characters exhibit openly sexist, homophobic and racist behavior, and often indulge all these prejudices while carrying out their police duties.

The series frequently makes use of Gene Hunt’s comical rudeness in the form of jokes and dramatic irony about a future which the audience already knows, but which the characters in 1973 do not. For example, in Series 1: Episode 5, Hunt declares, “There will never be a woman prime minister as long as I have a hole in my arse.”

Tony Jordan is the brilliant writer/co-creator of EastEnders, Hustle, and 23 other series. Matthew Graham and Ashley Pharoah have written for those series and about two dozen others.

Star John Simm starred in the brilliant Brit political series State of Play, and also appeared in Monkey Trousers, The Devil’s Whore (whom I assume to be Margaret Thatcher), Rumpole of the Bailey, and 46 other films and series. Philip Glenister earned two awards and 11 nominations for this series and its sequel Ashes to Ashes; he also appeared in State of Play, Calendar Girls, and 55 other films and series. Liz White was nominated for the Monte Carlo TV Festival’s Golden Nymph (Best Actress) award for Life on Mars, and performed in Agatha Christie’s Marple, Garrow’s Law, and 28 other series.

Critical reaction to the first series of Life on Mars was extremely positive. Steve O’Brien, writing for SFX, declared, “It looks like BBC One has…a monster hit on its hands…. It’s funny…and dramatic and exciting, and we’re really not getting paid for saying this.”

Of the second series, Alison Graham believed that “Sam Tyler and Gene Hunt are shaping up nicely as one of the great TV detective partnerships…. It’s vastly enjoyable and manages to stay just about believable, thanks to some strong writing and, of course, the two marvelous central performances.” 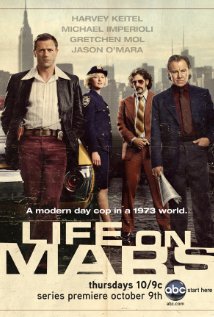 An American adaptation of the series was produced for ABC and ran for one season, from October 2008 to April 2009. David E Kelley produced the pilot and then handed duties over to others for the series production. It was broadcast to critical and minor public acclaim, but declining numbers led to cancellation in April 2009, after 17 episodes, though with sufficient lead time to allow the storyline to be concluded.

Life on Mars garnered critical praise for its premise, acting, and depiction of the 1970s but suffered from a declining viewership after its premiere and a two-month hiatus. The U.S. version did sell to Lithuania, Latvia, Ireland, Netherlands, and Australia.