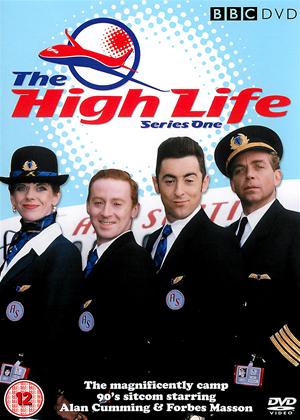 All seven episodes of Scottish airline comedy The High Life aired in the UK in Winter 1994-95, but it did not have a second season, because of co-star/co-screenwriter Alan Cumming’s burgeoning film career (Circle of Friends, GoldenEye, Emma, Romy, and Michele’s High School Reunion). Too obscure for Netflix, the complete daffy series is available on YouTube, including this episode.

Despite its short run, The High Life is fondly remembered for Steve and Sebastian’s joint catchphrase: “Oh deary me!” — and for the brilliant opening sequence which featured the cast performing a peppy dance routine to the title song. The entire series (including the pilot) was released on VHS and DVD in 2002 and was re-released in 2009.

The High Life delighted viewers with its mix of Scottish sensibility and camp outrageousness. Series highlights included the hilarious title sequence, Shona presenting the Air Scotia’s in-flight video, the Eurovision Song Contest entry “Pif Paf Pof (I Want To Have It Off),” and a gorgeously camp Batman spoof.

In the Pilot episode, Shona lands the task of presenting the Air Scotia’s in-flight video, much to Sebastian’s annoyance. In Episode 2 the impending arrival of the staff inspector could make Steve and Sebastian’s dreams of getting out of short-haul flights and into exotic long ones come true. In the next episode, Air Scotia employees attend a weekend of intensive training, where Steve finds love with flight-attendant Heather. In the next episode, Sebastian returns from vacation to discover something has happened between Shona and Steve.

Next Sebastian decides to enter the “Song for Europe” contest as Scotland’s first entry, in the hope of finding fame and fortune and some girls for Steve. Meanwhile, the Air Scotia crew host a birthday for the precocious daughter of Shona’s favorite rock star. In the final episode, the crew becomes involved in a small-business espionage plot involving cookies and a spoof of the 1960s TV series Batman.

On Broadway he won the Best Actor Tony Award for Cabaret and starred in a one-man adaptation of Macbeth.

Siobhan Redmond earned two BAFTA Best Actress nominations for Between the Lines, and her 55 other credits include Midsomer Murders and the comedy series Alfresco (with Hugh Laurie, Stephen Fry, Robbie Coltrane, Ben Elton, and Emma Thompson).

Forbes Masson’s 20 acting credits including Monarch of the Glen, Fun at the Funeral Parlour, Eastenders, My Dead Dad, and Hamish Macbeth.

Among Patrick Ryecart’s 70 credits are The King’s Speech, Dalziel and Pascoe, Lovejoy, and Rumpole of the Bailey.

Although sometimes silly and childish, this rare series is well worth checking out.