For seven seasons, members of the MacDonald family, their servants, neighbors, and visitors, scheme and counter-scheme at a massive Scottish Highlands estate. 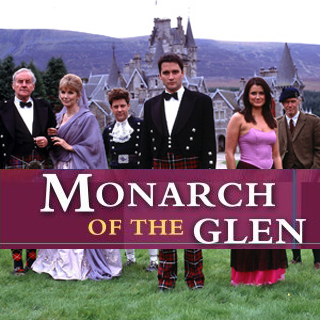 Monarch of the Glen is charming Scottish dramedy.

Monarch of the Glen is a humorous British television drama series set in the picturesque Scottish Highlands; it aired seven seasons between 2000 and 2005. Six of the series (64 episodes) are on Netflix and Netflix Instant streaming. Here is the pilot episode.

Although there were many cast changes over the years, Monarch of the Glen largely dealt with the vicissitudes of the formerly wealthy MacDonald family as they tried to keep their 40,000-acre, castle-like Glenbogle estate a going concern.

In the first season, young London restaurateur Archie MacDonald (Alistair Mackenzie) assumed the role of Laird (lord) to restore his eccentric family’s fortunes. The final two series of the show focused on new Laird Paul Bowman’s (Lloyd Owen) attempts to modernize the estate, and his dealings with new eccentric characters.

This delightful series is loosely based on Sir Compton Mackenzie’s Highland novels, which are set in the same location but in the 1930s and 1940s. 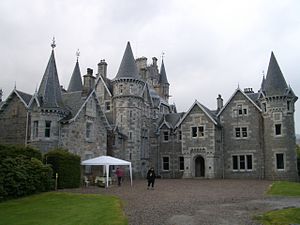 The first season attracted 8 million British viewers. At imdb.com, 93.4% of 1,385 viewers gave it thumbs up, and 28.4% rated it a perfect 10. It was strong with all demographic groups but did slightly better with females. It was nominated for three major awards, including Best Drama Program and Best-loved Drama.

Creator Michael Chaplin wrote on all 64 episodes, aided by 15 other writers.

The show’s mixture of comedy and drama, its location, and its cast appealed to countries all over the world, including the USA (BBC America and PBS), Australia, Canada, Norway, Sweden, Hong Kong, New Zealand, France, the Netherlands, Belgium, Vietnam, and Dubai. The series was shown to more than 100 countries on BBC Entertainment, the BBC’s 24-hour global entertainment channel, broadcast to Europe, the Middle East and Africa. Monarch of the Glen was Australia’s most popular BBC drama in 2002 and 2003.

In the first season, Archie’s girlfriend Justine has competition from local school headmistress Katrina and cook Lexie, while Archie has to cope with his eccentric parents Molly (Susan Hampshire) and Hector (the great Richard Briers) and their friend and neighbor Kilwillie (Downton Abbey creator-writer Julian Fellowes). 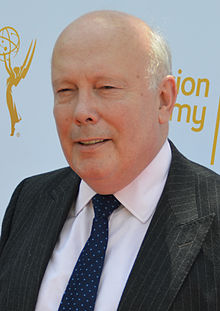 Susan Hampshire won Emmys for The First Churchills, Vanity Fair, and The Forsythe Saga. Her 60 film and TV credits include The Barchester Chronicles, David Copperfield, and Those Daring Young Men in Their Jaunty Jalopies. Alistair Mackenzie’s 43 credits include Lovejoy, Hamish Macbeth, and Agatha Christie’s Marple. Lloyd Owen was in The Vice, Wire in the Blood, and Apollo 18.

In addition to winning Emmy, Golden Globe, and eight other major awards as writer/producer/creator of Downton Abbey, Julian Fellowes, who plays the MacDonalds’ rich, randy neighbor, has also earned 10 awards and 23 other nominations for works including Gosford Park (best screenplay Oscar), Separate Lies, and From Time to Time.

This is a very pleasant program that your parents would enjoy, too.