Sir Ian McKellen and Sir Derek Jacobi play two aging gay men who have roomed together and humorously sniped at each other for 48 years. 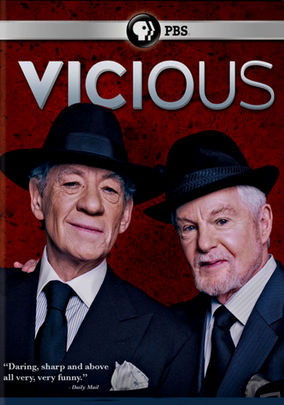 In the wonderful 2014-2015 British sitcom, Vicious, Freddie (Sir Ian McKellen) and Stuart (Sir Derek Jacobi) are an old gay couple who have lived together for 48 years in their Covent Garden flat. Their lives now revolve around frequently entertaining quirky guests, hurling caustic insults at each other at every opportunity, and making sure that their aged dog Balthazar is still breathing.

Although they hold onto petty slights for decades, we can still see that beneath all their vicious codependent fighting they maintain a deep love for each other.

I was going to write this column several months ago, when the first six hysterically funny episodes were available for free at the PBS website, but I hesitated for a time after PBS dropped them. They are still available on Netflix, however, and on YouTube you can see bits and pieces of episodes. Here, for example, is a sample of quips.

A second season of this gem was filmed early this year. The show is new, but I believe it will be up for many awards. Already, co-star Frances de la Tour, whom I also adored in Rising Damp, was nominated for the 2014 “Best Female Performance in a Comedy Role” BAFTA.

Of 3,437 viewers rating Vicious at imdb.com, 30% considered it a perfect 10 and more than 89.6% gave it thumbs up. It was very popular with all demographic groups, but best with females 19 and younger — and, interestingly — worst with males 45 and older who may find some of the age jokes too close to home.

My favorite wife and I loved all six episodes, but we thought the sixth one was the funniest. If you do watch this gem, stay past the end, because one of the best jokes runs under the final credits.

In Vicious, Freddie was a budding actor and Stuart worked in a bar when they first met, but their careers are pretty much over, although Freddie still thinks he has a chance to get more work. Joining Freddie and Stuart is their feisty best friend Violet (de la Tour). She’s a man-crazy spinster who is usually on hand to calm Freddie and Stuart down during one of their many arguments (when she’s not off in South American being conned by a fancy man).

Also part of the couple’s long-standing friendship group are grumpy Mason (Philip Voss) and ditzy Penelope (Marcia Warren). Penelope is really a scream. She usually has no idea where she is or what’s going on, so her utterances are wonderfully off the wall.

Freddie and Stuart’s worlds are turned upside down with the arrival of a handsome young man, Ash (Iwan Rheon), as their new upstairs neighbor whom they both hope is gay. Each episode begins with Stuart talking on the phone with his mother. Until we meet her in episode six, she has no clue that Stuart and his roommate of 48 years are gay. 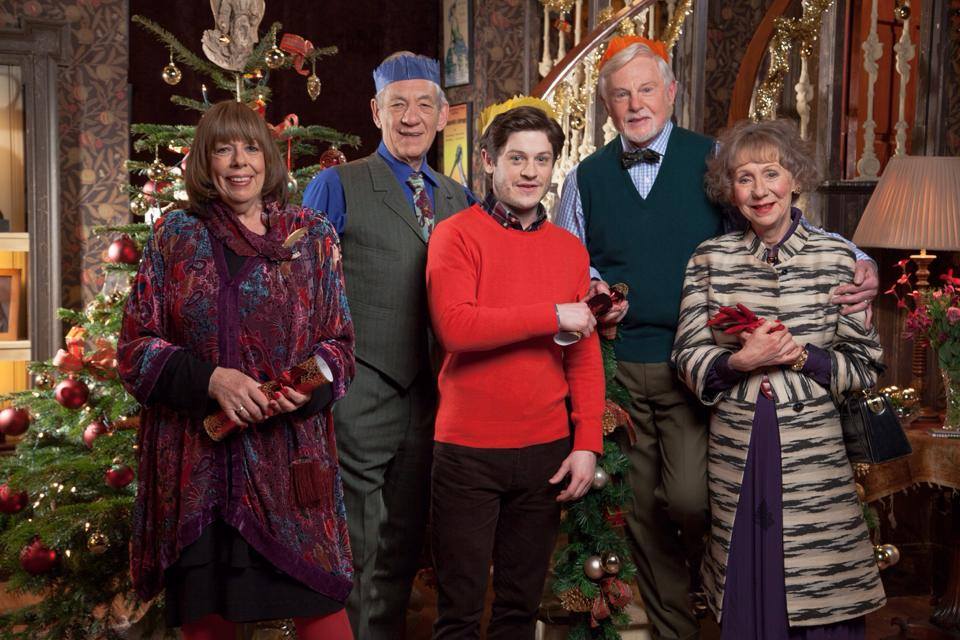 The series’ very clever creators and writers are Gary Janetti, who wrote 11 episodes of Family Guy and earned an Emmy nom), as well as nine episodes of Will & Grace, garnering three more Emmy noms, and Mark Ravenhill, who wrote Bette Bourne: It Goes With the Shoes and was awarded the 1998 London Evening Standard Theatre Most Promising Playwright Award for Handbag.

In the first episode, Freddie and Stuart host a wake to mark the passing of an old friend. Joined by their small circle of elderly friends, they manage to create a splendidly awkward evening of very little food and many biting insults. Their young new neighbor Ash spends the evening attempting to fend off Violet’s amorous advances. In other episodes Stuart is suspected of having an affair and Violet is handcuffed, robbed, and abandoned by her Internet boyfriend in Argentina.

McKellen said in an interview that he and Jacobi went to drama school together and had crushes on each other but never admitted it, and so they never entered into the relationship portrayed on this series.

Ian McKellen was Oscar-nominated for Gods and Monsters and one of his Lord of the Rings films. He has 44 other awards and 38 more noms for Richard III, Apt Pupil, X-Men, King Lear, Rasputin, and many other of his 104 films and TV projects. He is best known for starring in all the X-Men, Lord of the Rings, and Hobbit movies. He is also a giant of the British stage.

Derek Jacobi is the preeminent classical stage actor of the post-Olivier generation and holds both British and Danish knighthoods. He has won 13 awards and 12 nominations for works including The King’s Speech, Little Dorrit, Last Tango in Halifax, Gladiator, Dead Again, and I, Claudius. His 136 credits also include Up at the Villa, Gosford Park, Hamlet, Breaking the Code, The Human Factor, The Day of the Jackal, and Hippie Hippie Shake.

Frances de la Tour has won nine major U.S. and UK stage acting awards as well as an Evening Standard Best Actress award for the classic sitcom Rising Damp and four nominations for The History Boys, Duet for One, and Vicious. Her 58 credits include Into the Woods, Hugo, Harry Potter and the Goblet of Fire, The Book of Eli, Alice in Wonderland, Waking the Dead, New Tricks, and The Marty Feldman Comedy Machine.

Iwan Rheon has three nominations for Misfits and Game of Thrones. Marcia Warren’s 66 credits include Mrs. Palfrey at the Claremont, New Tricks, Midsomer Murders, The Inspector Lynley Mysteries, Keeping Up Appearances, and Leap Year. And the 55 credits of Philip Voss include Four Weddings and a Funeral, Octopussy, About Time, Inspector Morse, and The Brides in the Bath.

Some have criticized Vicious for its old-time depiction of bitchy old queens — quite unlike today’s sophisticated gays — but we found this consistently funny and highly enjoyable. We urge you to try and see it. The second season will  be back on PBS this summer.