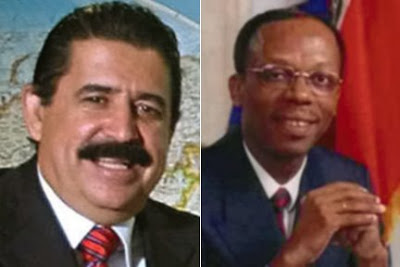 Two victims of coups d’etat, then and now: Manuel Zeyala of Honduras and Haiti’s Jean-Bertrand Aristide.
Coups Past and Present

The same United Nations that now condemns the coup in Honduras and demands Zelaya’s return occupied Haiti militarily during the coup government of Gérard Latortue, often attacking Haitians demonstrating for Aristide’s return, and occupies it still.

The soldiers who forced Manuel Zelaya at gunpoint from his bedroom to an airbase near Tegucigalpa could not have imagined the response their actions would bring. Not only has practically every government in Latin America condemned the coup d’état they carried out and demanded the reinstatement of Zelaya, but so have the Organization of American States and the United Nations, and, in a more guarded way, so has the United States.

More important in the long run is the resistance of countless Honduran people, who have defied the curfew declared by Roberto Micheletti, named by congress to be interim president, and who are facing down the soldiers now in control of the streets of the capital city.

President Manuel Zelaya was taken prisoner early Sunday morning after some 200 soldiers arrived at the presidential residence and disarmed his guards. Zelaya, still in his pajamas, was transported to an airfield and flown to Costa Rica. His ouster was similar, at least in superficial ways, to the last military coup in Latin America, which deposed President Jean-Bertrand Aristide of Haiti, for the second time, in February, 2004.

The two countries, despite important ethnic, historical and linguistic differences, are similar as well. They are of about the same size, with populations of around 7.5 million, and they are both among the poorest three or four countries in the hemisphere. Seventy percent of Hondurans live in poverty. The average annual income is $1600. Honduras and Haiti both have historically powerful military forces that have often shown a disposition for brutality. And they have both long been controlled by small wealthy elites.

But the two men are quite different. Aristide, a priest and practitioner of liberation theology, had a long history of direct involvement with the poor before becoming president and had shown great personal courage in their defense on more than one occasion. He received over 70% of the vote in one presidential election, 90% in another. Zelaya, in contrast, is the wealthy landowning son of wealthy landowners. He came to power in 2005 by a narrow margin through the politically centrist Partido Liberal, whose policies he initially supported, favoring CAFTA, for example, the Central America Free Trade Agreement.

It was only later in his presidency that Zelaya turned leftward, raising the minimum wage by 60% and forming alliances with the leftist and left-leaning Pink Tide governments of Latin America, in particular with that of Hugo Chávez. He agreed to join the Alternativa Bolivariana de las Américas, or ALBA, a regional fair-trade alliance, and somehow persuaded the unicameral legislature, dominated by his own Partido Liberal and the rightist Partido Nacional, to ratify his country’s membership in it. He became openly critical of the Honduran elite and of U.S. business interests in the region. He suggested, scandalously, that legalization of drug use was a saner approach than the U.S. drug wars.

Whatever his personal motives might have been, Zelaya, once in office, won the support of the poor of Honduras, who saw promise of improvement in their lives not only through an increase in wages but through membership in ALBA, which offered lower fuel prices through PetroCaribe, for example, and other benefits from an alliance with Venezuela, like the grant of several hundred tractors for Honduran farmers.

The wealthy of Honduras were not impressed, however, and neither were their armed and uniformed representatives in the military. 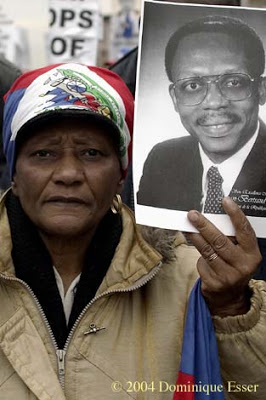 A woman holding up a picture of Jean-Bertrand Aristide in protest of the coup d’état in Haiti. Photo © 2004 Dominique Esser.
In Haiti a few years earlier Aristide had also sought to raise the minimum wage and had resisted the imposition by the World Bank and the International Monetary Fund of the privatization of public enterprises. He had tried to protect Haitian farmers and other producers against subsidized imports from the United States.

But in Honduras as elsewhere power is another question. In Venezuela, Ecuador and Bolivia, leftist governments had written new constitutions to insure the poor a voice in their own governments through new forms of democracy. The current Honduran constitution was written in 1982, during the presidency of Ronald Reagan in the United States and during a time of savage warfare in Central America, specifically in Nicaragua, where counterrevolutionaries supported by the United States attacked the Sandinista government from bases just across the border in Honduras. Honduras was heavily militarized and heavily under U.S. influence and the Honduran elite had no intention at such a time of sharing control of the government with the poor, whose counterparts across the border in Nicaragua had brought the Sandinistas to power.

Zelaya wanted a new constitution and, most probably, so did the people of Honduras. To determine the people’s will, though, Zelaya called for a non-binding poll of public opinion, as stipulated in Honduran law, specifically in the Civil Participation Act of 2006. The poll was scheduled to take place on Sunday, June 28. It would have asked participants if they wanted to include in next November’s general election the question of whether to form a constituent assembly for the purpose of writing a new constitution. As in other countries, the assembly would be made up of popularly elected members who would hammer out a new document, which would then be voted on by the population at large, a process that could take many months. 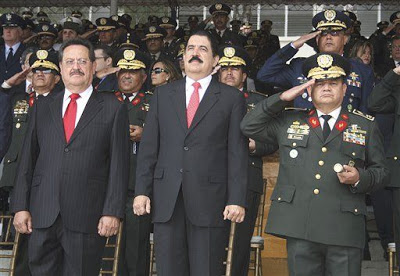 Edmundo Orellano (from left), Manuel Zelaya, Romeo Vásquez. Photo from ABC News.
Since the military in Honduras traditionally takes on the tasks of distributing ballots and ballot boxes for elections, Zelaya ordered the country’s ranking military officer, General Romeo Vásquez to make the arrangements. Vásquez refused. And as was his legal right, Zelaya relieved Vásquez of his duties. Defense Minister Edmundo Orellano quickly resigned in solidarity with Vásquez, as did the heads of the air force and the navy.

Zelaya then organized a group of supporters and marched with them to the air force base where the ballots and ballot boxes were being stored and retrieved them. He announced later that the materials for the polls were being protected by the national police and distributed by volunteers.

It was early in the morning of the day the poll was scheduled that the coup occurred. And almost immediately protest demonstrations began on the streets of Tegucigalpa.

Press accounts in Honduras and later elsewhere described the planned poll as a vote on whether the limit of one four-year term for the presidency should be eliminated, presumably allowing Zelaya to hold office indefinitely, a similar proposal having been voted down in Venezuela. Zelaya denies he has ever had any intention of remaining in office after his term expires next January.

Accounts in the rightist press after the coup said the ballots and ballot boxes had been flown in from Venezuela, that Zelaya had drawn up plans to dissolve the congress after the poll was conducted, and that 500 trained agitators had arrived from Venezuela to demonstrate against the coup. There had already been rumors questioning Zelaya’s sanity, as there had been rumors five years ago about Aristide’s emotional state.

The new government, under former president of the congress Roberto Micheletti, claims Zelaya was arrrested legitimately for attempting to hold an illegal election and that he will be arrested again if he returns to Honduras, as he has pledged to do. But Zelaya points out that no charges have ever been filed against him. The military have attacked journalists covering demonstrations and seven journalists, three from Telesur and four from the Associated Press have been detained briefly, not the actions of a government with nothing to hide.

The United States was clearly behind the Haitian coup of 2004. The United States military was present when Aristide was taken by force out of the country and U.S. troops occupied the country immediately after the coup. The question of direct U.S. involvement in the Honduran coup is naturally a topic of speculation. Honduras has long been almost totally dependent on the U.S. economically and therefore subservient to the U.S. politically. There have long been close ties between the U.S. military and its Honduran counterparts. There are some 500 U.S. servicemen at the Soto Cano Air Base and as many US civilian workers. Many Honduran officers have attended the Western Hemisphere Institute for Security Cooperation at Ft. Benning, formerly the School of the Americas, including General Vásquez and General Luís Javier Prince Suazo, head of the air force.

But considered broadly, it hardly matters whether the U.S. took a direct active part or not. The Honduran elite could have seen their own class interests best served by a coup that happened to correspond with what the U.S. would approve of. And the Honduran military would share the U.S. military’s worries about leftward trends in Latin America. 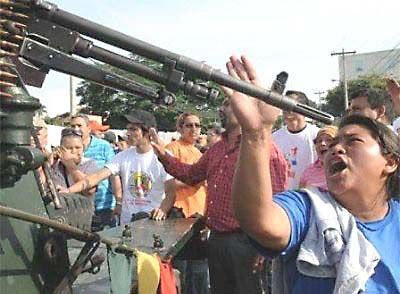 Demonstrators in Honduras confront military. Photo from Prensa Libre, Guatemala.
If all coups d’état have similarities, there are some puzzling differences in the reaction to the coup in Haiti five years ago and to the coup in Honduras days ago. Many news accounts in this country gave the impression that Aristide had somehow deserved what he got by alienating his own people, who had rebelled against him and run him out of the country or, alternately, that he had resigned of his own volition and fled for his own safety. The United States soldiers were in Haiti merely to keep the peace, as was the United Nations force that replaced them. But the UN forces are seen in Haiti as an army of occupation and there are frequent large demonstrations against them and for the return of Aristide. United Nations troops have been involved in countless acts of violence against Haitians, most recently in the shooting death of one of the thousands of Haitians at the funeral services for Father Gérard Jean Juste, a close associate of Aristide.

News accounts of the coup in Honduras generally describe it accurately as a coup d’état worthy of condemnation. But the same United Nations that now condemns the coup in Honduras and demands Zelaya’s return occupied Haiti militarily during the coup government of Gérard Latortue, often attacking Haitians demonstrating for Aristide’s return, and occupies it still. And the same Brazilian government that has just denounced the coup in Honduras supplies the commander and most of the soldiers for the United Nations occupying army. It was a Brazilian soldier who shot the mourner at Father Jean Juste’s funeral.

A good question these days is whether Latin Americans should now trust the United States and the United Nations. But change is slow and history is the greatest teacher.

See other Rag Blog articles about the Honduran coup d’etat: