It’s hard to imagine that anyone would decide to make a bomb and blow up a dam after watching ‘Night Moves.’ 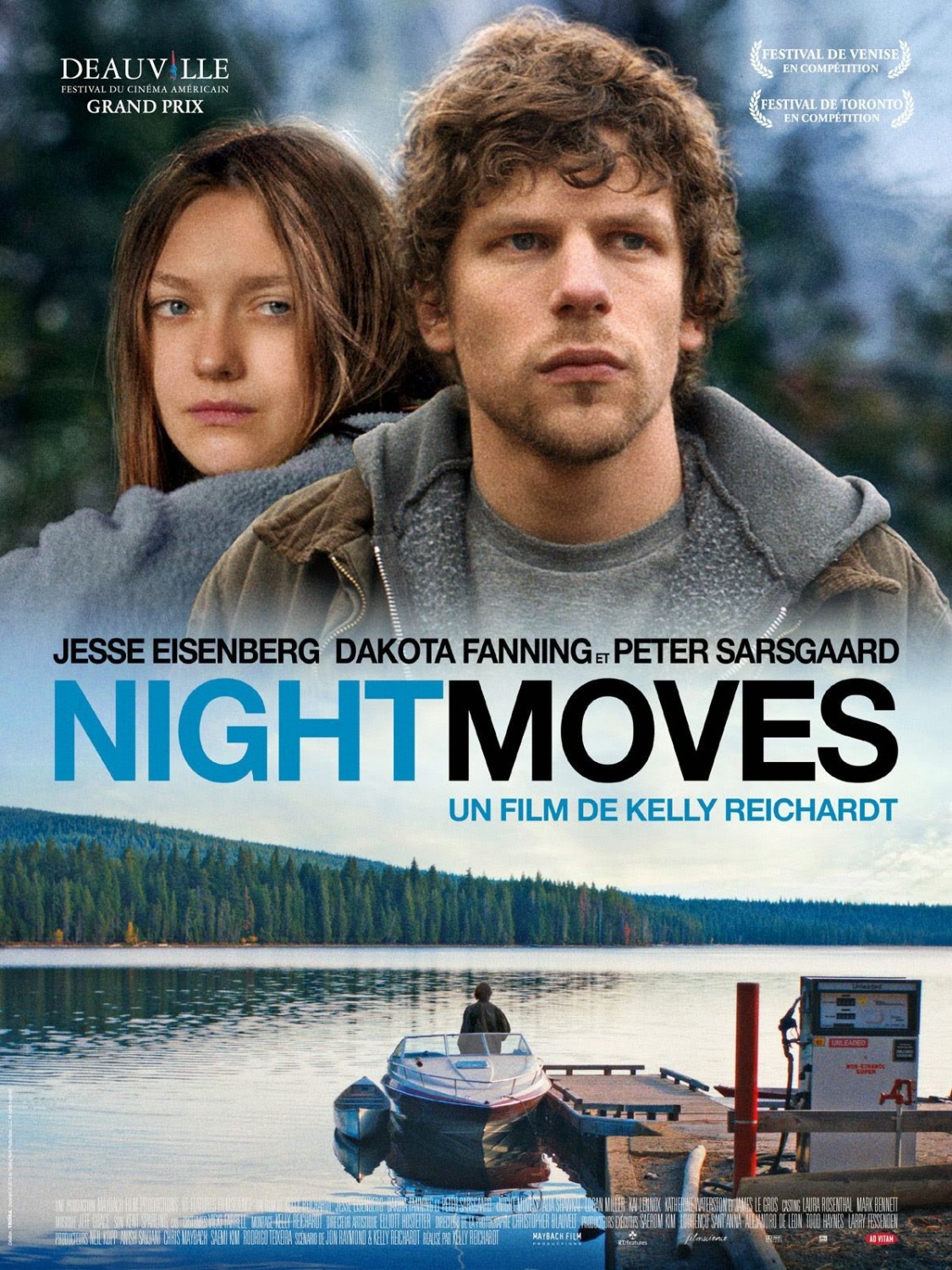 Kelly Reichardt’s 2013 movie, Night Moves — now in theaters across the country — seems to be two movies in one. The first part might be called a how-to picture. The second part is a searing moral melodrama.

The main characters are ecoterrorists. They live in rural Oregon in what appears to be the present day. While there are almost no events that might locate the movie in time and provide an historical reference point, the characters talk on cell phones. Josh grows organic vegetables on a small local farm. Dena works at a spa where women come to relax and heal and where a grotesque and horrible crime occurs. I don’t want to give it away.

Jesse Eisenberg plays Josh and Dakota Fanning plays Dena. Peter Sarsgaard plays Harmon who lives in a trailer in a remote rural area where he and Dena hook up for sex that we hear but don’t see.

Reichardt shows the ecoterrorists buying everything they need, including hundreds of pounds of fertilizer, to make a bomb and a nifty boat called “Night Moves” to deliver it to the dam they blow up in the dark.

This is a low budget film. There are no special effects and there is no big explosion on screen. In the background we hear the sound of the bomb going off.

Soon after the explosion, the police set up a roadblock. They question Josh and Dena and let them go. In Night Moves the police aren’t a problem for the ecoterrorists. They’re not an issue. What concerns director Reichardt, who co-wrote the screenplay with Jonathan Raymond, is the psychological and emotional fallout from the explosion.

It’s as though the bomb the characters build and detonate goes off inside and blows apart their relationships.

It’s as though the bomb the characters build and detonate goes off inside and blows apart their relationships. The explosion breaks Josh up into little pieces that he can’t and doesn’t put back together again. At the end he’s a wreck of a human being without a home, going nowhere. He breaks down his own cell phone and discards the separate pieces.

Watching the film I was reminded of the townhouse explosion in March 1970, when three members of the Weather Underground — Terry Robbins, Diana Oughton, and Teddy Gold — accidentally blew themselves up. No one who was part of the underground has ever, as far as I know, described the emotional and psychological impact of the explosion, though it must have been significant.

Members of Earth First! and other ecology-minded groups that engaged in acts of sabotage might also relate to the movie.

It’s hard to imagine that anyone would decide to make a bomb and blow up a dam after watching Night Moves. Harmon simply disappears. The director doesn’t follow his trail. But she zeroes in on Josh and Dena and follows their downward spiral.

Night Moves inches along too slowly for my taste, especially at the start when the three conspirators set their plan in motion.

The acting is excellent. Jesse Eisenberg conveys a lot of feeling through his body language and facial expressions. Understatement is the director’s forte. The dialogue is crisp and there are moments of humor, too. Dakota Fanning is believable as the little rich girl who bankrolls the operation and then slowly comes undone.

But the characters belong to a timeless time. I can’t imagine that an ecoterrorist in 2014 might do what Josh, Dena and Harmon do on screen. It’s also unlikely that they’d be able to buy hundreds of pounds of fertilizer to make a bomb.

Night Moves would have had a great deal more punch had it come out in 1970 at the time of the first Earth Day. Now, 44 years later, it feels like an artifact from another era.

[Jonah Raskin, a contributing editor at The Rag Blog, is a professor emeritus at Sonoma State University and the author of Field Days: A Year of Farming, Eating and Drinking Wine in California and Marijuanaland: Dispatches from an American War.]