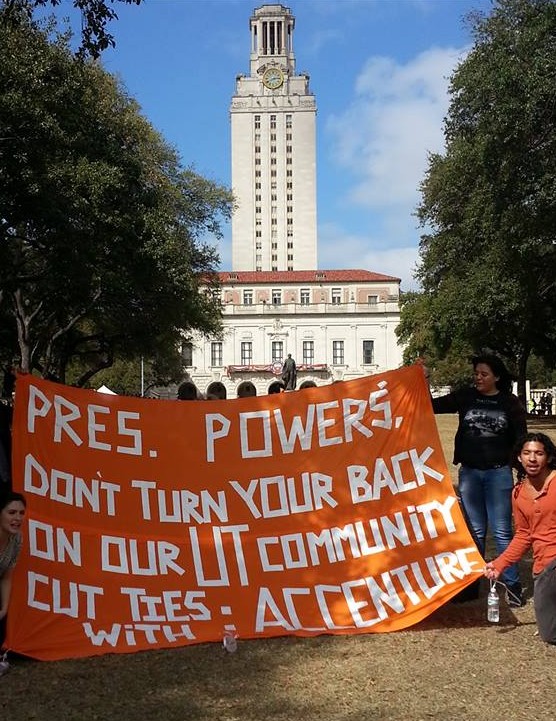 AUSTIN — A robust coalition has emerged in opposition to a University of Texas plan for “shared services.” The plan, drafted for UT by Accenture, a global consulting corporation, would centralize administrative services, create call centers, and eliminate 500 jobs.

The UT Save Our Community Coalition  (SSOC) has gathered more than 1,000 signatures on a petition opposing the University plan and will present them to the administration on April 23, the day of the rally.

In a related event, more than 120 faculty members signed a letter to President William Powers of the University of Texas at Austin expressing opposition to the corporate plan. (The full text can be found at the SSOC Facebook page.)

The faculty letter says, in part:

For many of us, it is very difficult not to see the university’s embrace of the Business Productivity Initiative as part of the overly zealous, profit-motivated corporatist mandate, which is likely to erode public institutions and public services across this country. The greatest tragedy of these privatization schemes is that they destroy the democratic spirit by calculatedly de-valuing our common wealth and the very notions of collective endeavor, mutual support, and the common good.

UT-Austin spokesman Gary Susswein, who claimed that the university administration “welcomed the feedback,” presented UT’s position this way: “In these days of dwindling higher education funding, we have to be responsible stewards of tax and tuition dollars. Consolidating administrative roles that are now spread across campus, largely through attrition, can help accomplish that.”

(It is hard to imagine how UT-Austin could be hurting for money. With an endowment of over $17 billion and a 2014 working budget of $14.6 billion [and an athletic budget of $163 million], it is the richest public university in the United States, and continues to expand facilities in all directions.)

Accenture’s track record in Texas has hardly been good. The state spent more than $200 million on an Accenture health and human services contract. The effort was scrapped when the privatized call centers were found to impede, rather than streamline, access to services such as Medicaid, food stamps, the Children’s Health Insurance Program (CHIP), and Temporary Aid to Needy Families.

The administration at the University of Michigan recently shelved an Accenture generated centralization plan similar to its UT shared services plan after faculty members vociferously opposed the plan.