After my work in Uptown, I focused on bringing the movement, the revolution, to working class white kids, who had been overlooked by organizers. 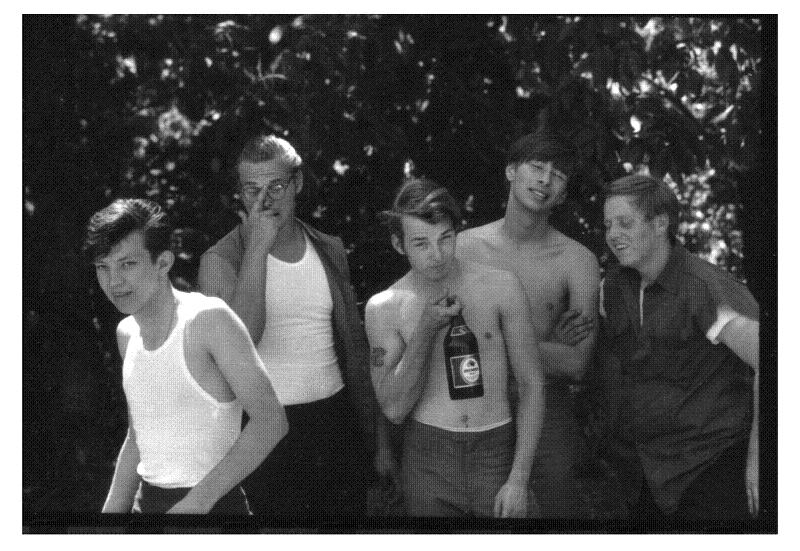 [In this series, Michael James is sharing images from his rich past, accompanied by reflections about — and inspired by — those images. This photo will be included in his forthcoming book, Michael Gaylord James’ Pictures from the Long Haul.]

In September of ’68, while liquored up on Jim Beam, I took in the reactionary flick Wild in the Streets at a rinky-dink theater in Yellow Springs, Ohio. This was a tale of wild-ass, rebellious, fascist hippies under 30 overthrowing the over-30 elders deemed worthless to the New World Order.

Suddenly, a line from the film’s song “The Shape of Things to Come” jumped off the screen: “There’s a new sun Risin’ up angry in the sky.” Rising Up Angry was about to become the name of the newspaper and organization I founded and helped build.

A group of us were gathered at a farm in Fairborn, Ohio, near Yellow Springs and Antioch College when we decided to see the flick. We were all active in mostly white poor and working class communities around the Midwest, working to build an alliance with blacks, Latinos, and progressives to shape a better America.

After my work in Uptown, I focused on bringing the movement, the revolution, to working class white kids, who by and large had been overlooked by organizers. I never read much Lenin, but a paragraph in his pamphlet, “What is To Be Done,” on the role of a newspaper in a pre-party situation resonated in my brain.

The Young Lords, a Northside Latino gang gone political also inspired me with their slogan “educate to liberate.” I envisioned a paper that mixed culture and politics we could give to the younger masses, particularly a working-class, white cultural group known as “greasers.”

Putting theory into practice, a group of us cruised the ‘hoods, meeting and befriending people. We did a lot of jumping in and out of cars while making the rounds, greeting people with an upbeat “What’s happening, brother?” We challenged kids to softball games, accepted offers to toke together, and shared chugs of beer, all the while rapping endlessly about ending the Vietnam war, getting along with people of all races, standing up to the pigs, and respecting women — “the sisters.”

We scoured the city, discovering Chicago’s parks, field houses, corners, alleys, hot dog stands, and bars. This effort brought the notorious year 1968 to a close, and revved up as we moved into 1969.

I was running with Patrix Sturgis, my old pal, and with Jimmy Cartier, a fellow football-playing friend from Lake Forest College, and my new pal Steve Tappis. Tappis was from New York and worked in the National SDS office in Chicago, in the print shop. 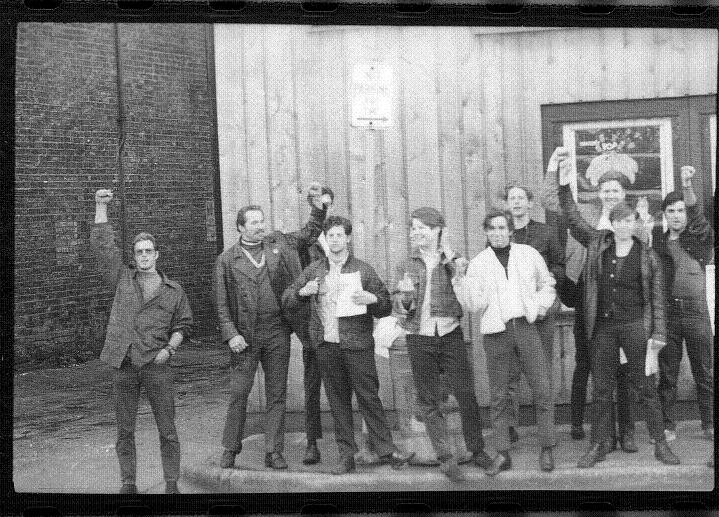 The three of us were “porch climbers” for Bud and Arts Delivery Service, ascending back stairs shouldering boxes of groceries being delivered to residents in Rogers Park and West Rogers Park. We met each morning at a Shell Station on Ashland to drink coffee and scarf down donuts before we jumped into two blue Ford Econoline vans and spent the day running up and down doing our pre-Pea-Pod work.

Our helpers were proletarian teen dudes wearing combat boots, jeans, white t-shirts and work jackets of either black leather or dark blue quilting. Known as C & D (Clark & Devon), they were loosely connected to the TJO’s (Thorndale Jag Offs), who were older dudes, some of whom are now long in prison, racist, and tied to the Aryan Nation.

The C & D’s hung on their namesake corner or inside Dewey’s, a chili and hot dog parlor affectionately known as Du A’s — pronounced with a “French” accent.

Tappis and I moved into a storefront near the southwest corner of Kedzie and Armitage, where Patrix did the layout for the first issue of the Rising Up Angry paper. It came off the presses and hit the streets on July 29, 1969. The cover was an attention-getter: a photo by Pete Kuttner of Pete Hoyer astride my Triumph with Judy Tischer on back, holding an M1 rifle.

We staged this in a decidedly non-proletarian setting, behind Lake Forest College’s Farwell Field at the home of Gerry Gerasimo (my anthropology prof). The last time I’d been there was on the field playing football for Lake Forest College in 1964.

We were on the move across the city’s grid, checking out the scene and doing outreach, meeting and talking to kids wherever we went.

Before long RUA seemed suddenly everywhere. We were on the move across the city’s grid, checking out the scene and doing outreach, meeting and talking to kids wherever we went. We took our young white comrades to rallies against the war and for the liberation of incarcerated Black Panther Party leader Fred Hampton. We introduced them to members of the Young Lords Organization. And we held our own events: meetings, film screenings, and “People’s Dances.” 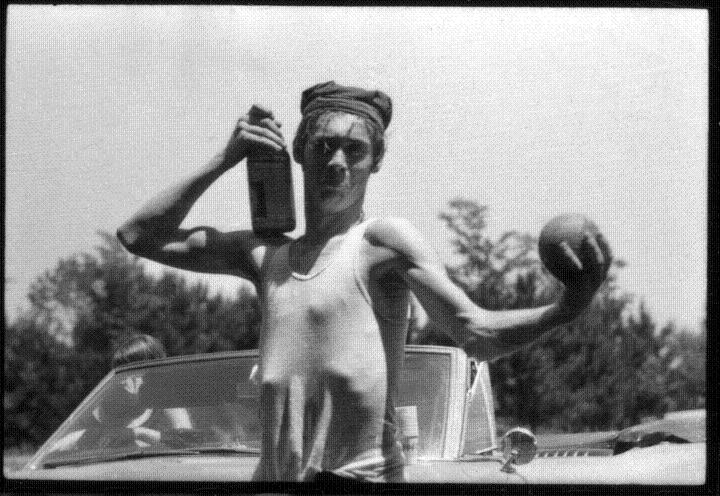 The paper Rising Up Angry was a great organizing tool. It included a section called “Stone Grease Grapevine” with pics of young kids, their fists in the air, telling their own story about their ongoing harassment by police, misnamed Chicago’s “finest.” People love seeing their pictures — and their stories — in the paper.

We distributed the paper wherever we went, focusing on groups who went by the names of their neighborhood, park, corner, or gang: the CORPS, Kozy Park, The Gaylords, Popes, Brandts Park, Bel Airs, PBC (Paulina Barry Community), 79th Street, the Bush. The organization grew. We printed more papers every three weeks, with sales quotas assigned to members positioned on specific corners to sell ‘Angry.

I loved selling Rising Up Angry on Saturdays near Lincoln and Belmont by the hot dog stand on Melrose, or in Logan Square by the Logan Theater near Milwaukee and Diversey. My rap, my spiel, synthesized Jimmy Cliff and Mao: “Time to take the chain from the brain, time to get back in the peoples’ game; it’s time to move it from the lower level to the higher, from the shallower to the deeper, from the one-sided to the many, and from the abstract to the concrete! All Power to the People!” 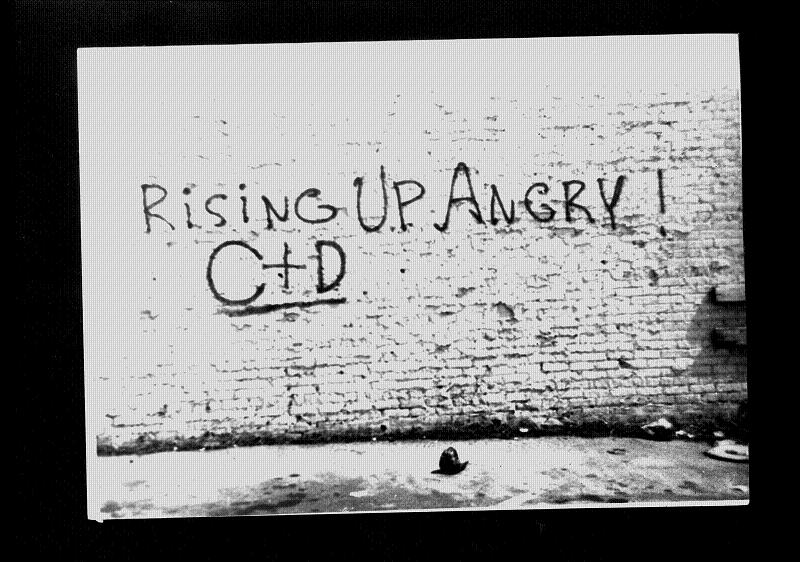 Our name showed up on walls throughout the city: “Rising Up Angry,” “All Power to the People!,” “Stop the Pigs.” Stormy Brown called walls “the pages in the People’s Book.” Stormy, aka Diane Libman, was my new love. I met her at Johnny Rossen’s Three Penny Cinema on Lincoln, across from the alley by the Biograph Theater where the outlaw John Dillinger was gunned down.

Rossen — a communist — had been in the U.S. Army, met Gandhi, run for Mayor of St. Louis, owned most Latino movie theaters in the city, and was SDS’s landlord. Our Bud and Arts porch-climbing delivery crew helped him get his new art film theater ready.

Mimi Harris was the manager, and her friend Stormy gave me a good amount of popcorn while I took in flicks like The Battle of Algiers, Monterrey Pop, Hail Hero (the first feature film of my fellow Downshifters Hot Rod Club member Michael Douglas), and a wonderful short called Rodeo, which featured slow motion bull riding to slow music. 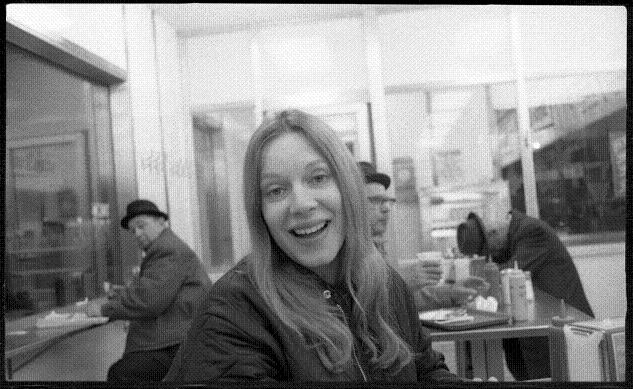 Stormy had two sons, Chuck and David. She and the boys lived on Bell Street at her mom’s home. Jean Briggman became my mother-in-law on January 4, 1970, when Stormy and I were married in the eyes of the people gathered at the Body Politic Theater above Oxford’s Pub on Lincoln.

Our “people’s wedding” was a wild and fun affair. Jimmy Cartier, my fellow football playing porch-climber married us while his girlfriend, Lisa MacInroy held a shotgun, somehow meant to symbolically show our love and a willingness to fight for justice, as well as the timing of the wedding — we were about to become parents together.

After the service my Dad told me that he would give us a wedding present when we were “legally” married. Thanks, Dad. Guests included family and friends, many from radical circles and the emerging rainbow coalition: Black Panthers, Young Lords, Young Patriots, and Rising Up Angry, plus SDS comrades, and Weathermen (who were about to go underground).

Someone stuck a tab of acid in my mouth that kicked in after Stormy and I escaped and were eating and drinking Mexican hot chocolate late in the night at a now long-gone Mexican joint on Halsted near the Maxwell Street Market. My last memory of that fine day was a rainbow-shower of wax dripping from dozens of candles in our magical apartment on Kedzie Boulevard in Logan Square. 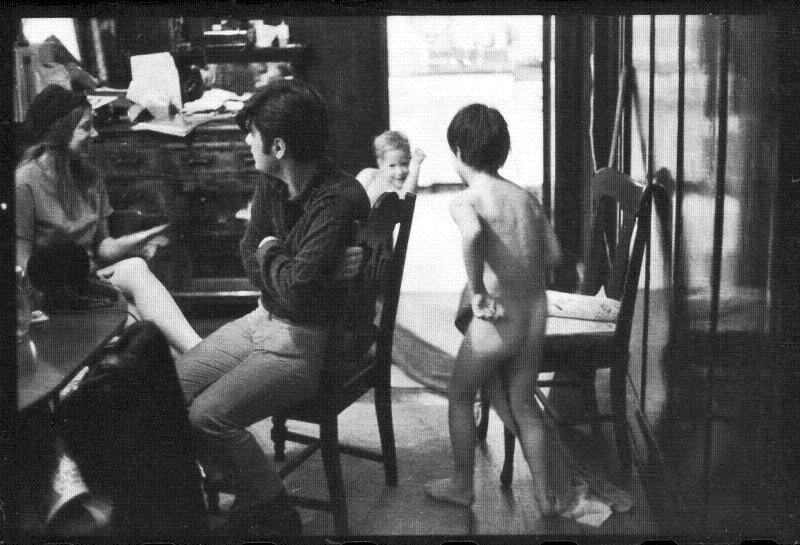 Stormy and I had a son. Jesse Hampton Nathanial William Floyd Robin James was named after “peoples bandits,” revolutionaries and leaders of slave revolts. Patrix, Tappis, Stormy, the kids and I lived in our third floor crib, and people from near and far visited.

After awhile Stormy and I moved back to Lake View, where she had grown up. And before long we fell out of sync. Stormy and Tappis hooked up, which not surprisingly changed the dynamics of the family we were forging. The breakup was painful for me, but also taught me much about the grand adventure of life. In the spring of 1971 I moved back to Logan Square, into a new crib on Spaulding Avenue near the monument where the teens hung out.

Everyone involved in our split-up handled it in a relatively principled manner. The kids spent time at both homes. Our movement work continued. Soon enough my major beefs with Stormy were over my writings for Rising Up Angry, of which she was editor. I remember well when I came back to life one sunny afternoon, listening while stoned to Graham Nash singing “Somebody’s going to take my heart, nobody’s going to break my heart again.”

All my life I’ve had the kind of temperament that wants to encourage everyone to just get along, a “we can work it out” way of looking at the world. This included my relationship with Stormy, when in 1976 she became one of my business partners, a co-founder and co-owner of the Heartland Café. But in the years leading up to that, organizing and capturing people’s imaginations was the challenge and work at hand.

[Michael James is a former SDS national officer, the founder of Rising Up Angry, co-founder of Chicago’s Heartland Café (1976 and still going), and co-host of the Saturday morning (9-10 a.m. CDT) Live from the Heartland radio show, here and on YouTube. He is reachable by one and all at michael@heartlandcafe.com. ]