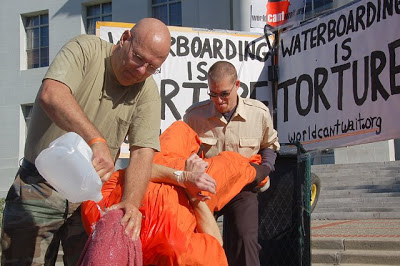 Dick Cheney has publicly confessed to ordering war crimes. Asked about waterboarding in an ABC News interview, Cheney replied, “I was aware of the program, certainly, and involved in helping get the process cleared.” He also said he still believes waterboarding was an appropriate method to use on terrorism suspects. CIA Director Michael Hayden confirmed that the agency waterboarded three Al Qaeda suspects in 2002 and 2003.

U.S. courts have long held that waterboarding, where water is poured into someone’s nose and mouth until he nearly drowns, constitutes torture. Our federal War Crimes Act defines torture as a war crime punishable by life imprisonment or even the death penalty if the victim dies.

Under the doctrine of command responsibility, enshrined in U.S. law, commanders all the way up the chain of command to the commander-in-chief can be held liable for war crimes if they knew or should have known their subordinates would commit them and they did nothing to stop or prevent it.

Why is Cheney so sanguine about admitting he is a war criminal? Because he’s confident that either President Bush will preemptively pardon him or President-elect Obama won’t prosecute him.

Both of those courses of action would be illegal. [emphasis added]

First, a president cannot immunize himself or his subordinates for committing crimes that he himself authorized. On February 7, 2002, Bush signed a memo erroneously stating that the Geneva Conventions, which require humane treatment, did not apply to Al Qaeda and the Taliban. But the Supreme Court made clear that Geneva protects all prisoners. Bush also admitted that he approved of high level meetings where waterboarding was authorized by Cheney, Condoleezza Rice, John Ashcroft, Colin Powell, Donald Rumsfeld and George Tenet.

Attorney General Michael Mukasey says there’s no need for Bush to issue blanket pardons since there is no evidence that anyone developed the policies “for any reason other than to protect the security in the country and in the belief that he or she was doing something lawful.” But noble motives are not defenses to the commission of crimes.

Lt. Gen. Antonio Taguba, who investigated the Abu Ghraib scandal, said, “There is no longer any doubt as to whether the current administration has committed war crimes. The only question that remains to be answered is whether those who ordered the use of torture will be held to account.”

Second, the Constitution requires President Obama to faithfully execute the laws. That means prosecuting lawbreakers. When the United States ratified the Geneva Conventions and the Convention against Torture and Other Cruel, Inhuman or Degrading Treatment or Punishment, thereby making them part of U.S. law, we agreed to prosecute those who violate their prohibitions.

The bipartisan December 11 report of the Senate Armed Services Committee concluded that “senior officials in the United States government solicited information on how to use aggressive techniques, redefined the law to create the appearance of their legality, and authorized their use against detainees.”

Lawyers who wrote the memos that purported to immunize government officials from war crimes liability include John Yoo, Jay Bybee, William Haynes, David Addington and Alberto Gonzales. There is precedent in our law for holding lawyers criminally liable for participating in a common plan to violate the law.

The committee’s report also found that “Rumsfeld’s authorization of aggressive interrogation techniques for use at Guantánamo Bay was a direct cause of detainee abuse there.” Those techniques migrated to Iraq and Afghanistan, where prisoners in U.S. custody were also tortured.

Pardons or failures to prosecute the officials who planned and authorized torture would also be immoral. Former Navy General Counsel Alberto Mora testified to the Senate Armed Services Committee in June 2008 that “there are serving U.S. flag-rank officers who maintain that the first and second identifiable causes of U.S. combat deaths in Iraq – as judged by their effectiveness in recruiting insurgent fighters into combat – are, respectively the symbols of Abu Ghraib and Guantánamo.”

During the campaign, Obama promised to promptly review actions by Bush officials to determine whether “genuine crimes” were committed. He said, “If crimes have been committed, they should be investigated,” but “I would not want my first term consumed by what was perceived on the part of the Republicans as a partisan witch hunt, because I think we’ve got too many problems we’ve got to solve.”

Two Obama advisors told the Associated Press that “there’s little-if any – chance that the incoming president’s Justice Department will go after anyone involved in authorizing or carrying out interrogations that provoked worldwide outrage.”

When he takes office, Obama should order his new attorney general to appoint an independent prosecutor to investigate and prosecute those who ordered and authorized the commission of war crimes.

Obama has promised to bring real change. This must be legal and moral change, where those at the highest levels of government are held accountable for their heinous crimes. The new president should move swiftly to set an important precedent that you can’t authorize war crimes and get away with it.

[Marjorie Cohn is a professor at Thomas Jefferson School of Law and President of the National Lawyers Guild. She is the author of Cowboy Republic: Six Ways the Bush Gang Has Defied the Law and co-author of Rules of Disengagement: The Politics and Honor of Military Dissent (with Kathleen Gilberd), which will be published this winter by PoliPointPress. Her articles are archived at www.marjoriecohn.com. (The views expressed in this article are solely those of the writer; she is not acting on behalf of the National Lawyers Guild or Thomas Jefferson School of Law.)]