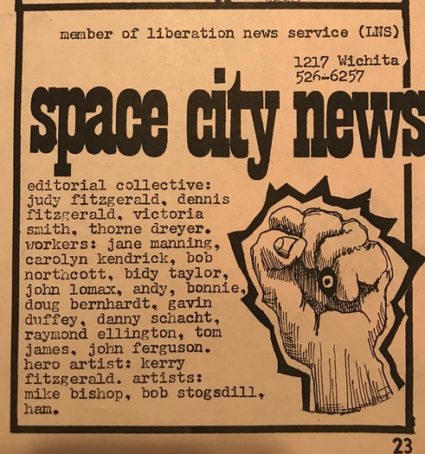 Did you work on Space City!, Houston’s historic underground newspaper?

Did you sell it? Did you read it?

You may be able to help us.

As part of a Space City! project, the New Journalism Project is assembling a collection to be digitized. And we need five issues from the final year of the paper, the year when the paper went weekly. If you have kept a stash of papers, as some of us have, please look through those seeds and stems now. If you are a junior archivist — a.k.a. hoarder — you may be able to find the following:

If you want to take a tour down memory lane, you can view the Space City! covers that we have assembled on Flickr.com.

Never underestimate the hoarders among us. We have two people, in particular, to thank for keeping the faith and the newspapers. Sherwood Bishop was the seventh member of the newspaper’s collective, joining the original six as quickly as he read the first issue. Sherwood has safeguarded his collection of Space City! newspapers for five decades. They currently reside in San Marcos, Texas.

Dennis Fitzgerald, one of the original six members of the newspaper’s staff, is no longer with us, but his spirit is alive and well. He kept the faith and the newspapers in British Columbia. Dennis’ daughter Kelly, who was featured with her parents as a babe in arms on the November 26, 1970 cover of Space City!, recently brought Dennis’ collection to Austin.

We have almost all of the 106 issues that were published. The newspaper changed its name once (it was originally Space City News) and then its logo several times, but it was a mainstay in Houston for three years. They were years of upheaval over the war in Vietnam and over black liberation. They were also years in which a rich counterculture began to emerge, years that helped usher in the Houston of today, resilient and more diverse than any other city in the United States.

So, dear readers, take a look through your closets and storage bins. If you can find the missing issues and reunite them with their sisters and brothers, we will be eternally grateful. We will reward you with a newly minted Space City! coffee mug and we will honor you in our Hoarder Hall of Fame.

Space City! made history and we are determined to honor that history, first by making the paper accessible to the world through a digital archive. Then, we will write a book, similar to our widely-acclaimed Celebrating The Rag, Austin’s Iconic Underground Paper.

Who knows? Then, we may produce a musical. Shades of Liberty Hall.

If you have any of these issues or if you would like to be involved in the Space City! project, please contact Thorne Dreyer or Alice Embree at editor@theragblog.com.