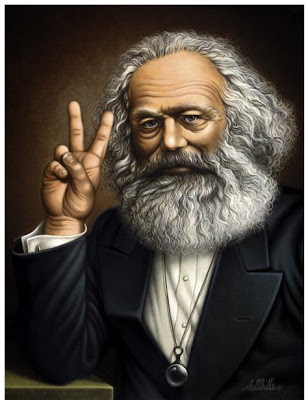 Graphic from The Yellow Brick Road.
Rising to the Occasion: Reimagining Socialism

We see a tremendous opportunity in the bleak fact that millions of Americans have been rendered redundant by the capitalist economy and are free to dedicate their considerable talents to creating a more just and sustainable alternative.

[This article appears in the March 13, 2009, edition of The Nation. The editors of The Nation preface it as follows: “Socialism’s all the rage. ‘We Are All Socialists Now,’ Newsweek declares. As the right wing tells it, we’re already living in the U.S.S.A. But what do self-identified socialists… have to say about the global economic crisis?]

If you haven’t heard socialists doing much crowing over the fall of capitalism, it isn’t just because there aren’t enough of us to make an audible crowing sound. We, as much as anyone on Wall Street in, say, 2006, appreciate the resilience of American capitalism–its ability to regroup and find fresh avenues for growth, as it did after the depressions of 1877, 1893 and the 1930s. In fact, The Communist Manifesto can be read not only as an indictment of capitalism but as a breathless paean to its dynamism. And we all know the joke about the Marxist economist who successfully predicted eleven out of the last three recessions.

But this time the patient may not get up from the table, no matter how many times the electroshock paddles of “stimulus” are applied. We seem to have entered the death spiral where rising unemployment leads to reduced consumption and hence to greater unemployment. Any schadenfreude we might be tempted to feel as executives lose their corporate jets and the erstwhile Masters of the Universe wipe egg from their faces is quickly dashed by the ever more vivid suffering around us. Food pantries and shelters can no longer keep up with the demand; millions face old age without pensions and with their savings gutted; we personally are consumed with anxiety about the future that awaits our children and grandchildren.

Besides, it wasn’t supposed to happen this way. There was supposed to be a revolution, remember? The socialist idea, prediction, faith or whatever was that capitalism would fall when people got tired of trying to live on the crumbs that fall from the chins of the rich and rose up in some fashion–preferably inclusively, democratically and nonviolently–and seized the wealth for themselves. Such a seizure would have looked nothing like “nationalization” as currently discussed, in which public wealth flows into the private sector with little or no change in the elites that control it or in the way the control is exercised. Our expectation as socialists was that the huge amount of organizing required for revolutionary change would create an infrastructure for governance, built out of–among other puzzle pieces–unions, community organizations, advocacy groups and new organizations of the unemployed and nouveau poor.

It was also supposed to be a simple matter for the masses to take over or “seize” the physical infrastructure of industrial capitalism–the “means of production”–and start putting it to work for the common good. But much of the means of production has fled overseas–to China, for example, that bastion of authoritarian capitalism. When we look around our increasingly shuttered landscape and survey the ruins of finance capitalism, we see bank upon bank, realty and mortgage companies, title companies, insurance companies, credit-rating agencies and call centers, but not enough enterprises making anything we could actually use, like food or pharmaceuticals. In recent years, capitalism has become increasingly and almost mystically abstract. Outside manufacturing and the service sector, fewer and fewer people could explain to their children what they did for a living. The brightest students went into finance, not physics. The biggest urban buildings housed cubicles and computer screens, not assembly lines, laboratories, studios or classrooms. Even our flagship industry, manufacturing autos, would require major retooling to make something we could use–not more cars, let alone more SUVs, but more windmills, buses and trains.

What is most galling, from a socialist perspective, is the dawning notion that capitalism may be leaving us with less than it found on this planet, about 400 years ago, when the capitalist mode of production began to take off. Marx imagined that industrial capitalism had potentially solved the age-old problem of scarcity and that there was plenty to go around if only it was equitably distributed. But industrial capitalism–with some help from industrial communism–has brought about a level of environmental destruction that threatens our species along with countless others. The climate is warming, the oil supply is peaking, the deserts are advancing and the seas are rising and contain fewer and fewer fish for us to eat. You don’t have to be a freaky doomster to see that extinction may be what’s next on the agenda.

In this situation, with both long-term biological and day-to-day economic survival in doubt, the only relevant question is: do we have a plan, people? Can we see our way out of this and into a just, democratic, sustainable (add your own favorite adjectives) future?

Let’s just put it right out on the table: we don’t. At least we don’t have some blueprint on how to organize society ready to whip out of our pockets. Lest this sound negligent on our part, we should explain that socialism was an idea about how to rearrange ownership and distribution and, to an extent, governance. It assumed that there was a lot worth owning and distributing; it did not imagine having to come up with an entirely new and environmentally sustainable way of life. Furthermore, the history of socialism has been disfigured by too many cadres who had a perfect plan, if only they could win the next debate, carry out a coup or get enough people to fall into line behind them.

But we do understand–and this is one of the things that make us “socialists”–that the absence of a plan, or at least some sort of deliberative process for figuring out what to do, is no longer an option. The great promise of capitalism, as first suggested by Adam Smith and recently enshrined in “market fundamentalism,” was that we didn’t have to figure anything out, because the market would take care of everything for us. Instead of promoting self-reliance, this version of free enterprise fostered passivity in the face of that inscrutable deity, the Market. Deregulate, let wages fall to their “natural” level, turn what remains of government into an endless source of bounty for contractors–whee! Well, that hasn’t worked, and the core idea of socialism still stands: that people can get together and figure out how to solve their problems, or at least a lot of their problems, collectively. That we–not the market or the capitalists or some elite group of über-planners–have to control our own destiny.

We admit: we don’t even have a plan for the deliberative process that we know has to replace the anarchic madness of capitalism. Yes, we have some notion of how it should work, based on our experiences with the civil rights movement, the women’s movement and the labor movement, as well as with countless cooperative enterprises. This notion centers on what we still call “participatory democracy,” in which all voices are heard and all people equally respected. But we have no precise models of participatory democracy on the scale that is currently called for, involving hundreds of millions, and potentially billions, of participants at a time.

What might this look like? There are some intriguing models to study, like the Brazilian Workers Party’s famous experiments in developing a participatory budget in Porto Alegre. Z Magazine founder Michael Albert developed a detailed approach to mass-based planning that he calls participatory economics, or “parecon,” and one of us (Fletcher, in his book Solidarity Divided, written with Fernando Gapasin) has proposed a locally based network of people’s assemblies. But all this is experimental, and we realize that any system for mass democratic planning will be messy. It will stumble; it will be wrong sometimes; and there will be a lot of running back to the drawing board.

But as socialists we know the spirit in which this great project of collective salvation must be undertaken, and that spirit is solidarity. An antique notion until very recently, it flickered into life again in the symbolism and energy of the Obama campaign. The Yes We Can! chant was the slogan of the United Farm Workers movement and went on to be adopted by various unions and community-based organizations to emphasize what large numbers of people can accomplish through collective action. Even Obama’s relatively anodyne calls for a new commitment to volunteerism and community service seem to have inspired a spirit of “giving back.” If the idea of democratic planning, of controlling our destiny, is the intellectual content of socialism, then solidarity is its emotional energy source–the moral understanding and the searing conviction that, however overwhelming the challenges, we are in this together.

Solidarity, though, is an empty sentiment without organization–ways of thinking and working together, and of connecting the social movements that are battling injustice every day. We see a tremendous opportunity in the bleak fact that millions of Americans have been rendered redundant by the capitalist economy and are free to dedicate their considerable talents to creating a more just and sustainable alternative. But if we are serious about collective survival in the face of our multiple crises, we have to build organizations, including explicitly socialist ones, that can mobilize this talent, develop leadership and advance local struggles. And we have to be serious, because the capitalist elites who have run things so far have forfeited all trust or even respect, and we–progressives of all stripes–are now the only grown-ups around.

[Barbara Ehrenreich is the author, most recently, of This Land Is Their Land: Reports From a Divided Nation. Bill Fletcher Jr. originated the call for founding “Progressives for Obama.” He is the executive editor of Black Commentator, and founder of the Center for Labor Renewal.]