Bill Maher : Bald Eagle is Out. Cute Puppy is In. 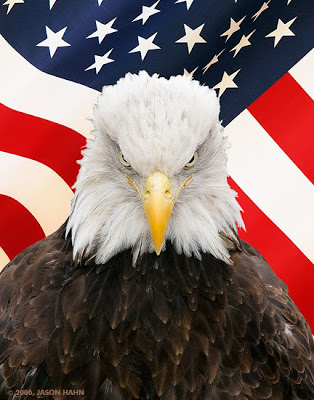 New Rule: If America Can’t Get it Together, We Lose the Bald Eagle

Get your head out of the clouds, you socialist dreamer! ‘What do we want!? A small improvement! When do we want it!? 2016!’

New Rule: If America can’t get its act together, it must lose the bald eagle as our symbol and replace it with the YouTube video of the puppy that can’t get up. As long as we’re pathetic, we might as well act like it’s cute.

I don’t care about the president’s birth certificate, I do want to know what happened to “Yes we can.” Can we get out of Iraq? No. Afghanistan? No. Fix health care? No. Close Gitmo? No. Cap-and-trade carbon emissions? No. The Obamas have been in Washington for ten months and it seems like the only thing they’ve gotten is a dog.

Well, I hate to be a nudge, but why has America become a nation that can’t make anything bad end, like wars, farm subsidies, our oil addiction, the drug war, useless weapons programs — oh, and there’s still 60,000 troops in Germany — and can’t make anything good start, like health care reform, immigration reform, rebuilding infrastructure.

Even when we address something, the plan can never start until years down the road. Congress’s climate change bill mandates a 17% cut in greenhouse gas emissions… by 2020! Fellas, slow down, where’s the fire? Oh yeah, it’s where I live, engulfing the entire western part of the United States!

We might pass new mileage standards, but even if we do, they wouldn’t start until 2016. In that year, our cars of the future will glide along at a breathtaking 35 miles-per-gallon. My goodness, is that even humanly possible? Cars that get 35 miles-per-gallon in just six years? Get your head out of the clouds, you socialist dreamer! “What do we want!? A small improvement! When do we want it!? 2016!”

When it’s something for us personally, like a laxative, it has to start working now. My TV remote has a button on it now called “On Demand.” You get your ass on my TV screen right now, Jon Cryer, and make me laugh. Now! But when it’s something for the survival of the species as a whole, we phase that in slowly.

Folks, we don’t need more efficient cars. We need something to replace cars. That’s what’s wrong with these piddly, too-little-too-late half-measures that pass for “reform” these days. They’re not reform, they’re just putting off actually solving anything to a later day, when we might by some miracle have, a) leaders with balls, and b) a general populace who can think again. Barack Obama has said, “If we were starting from scratch, then a single-payer system would probably make sense.” So let’s start from scratch.

Even if they pass the shitty Max Baucus health care bill, it doesn’t kick in for four years, during which time 175,000 people will die because they’re not covered, and about three million will go bankrupt from hospital bills. We have a pretty good idea of the Republican plan for the next three years: Don’t let Obama do anything. What kills me is that that’s the Democrats’ plan, too.

We weren’t always like this. Inert. In 1965, Lyndon Johnson signed Medicare into law and 11 months later seniors were receiving benefits. During World War II, virtually overnight FDR had auto companies making tanks and planes only. In one eight year period, America went from JFK’s ridiculous dream of landing a man on the moon, to actually landing a man on the moon.

This generation has had eight years to build something at Ground Zero. An office building, a museum, an outlet mall, I don’t care anymore. I’m tempted to say that, symbolically, all America can do lately is keep digging a hole, but Ground Zero doesn’t represent a hole. It is a hole. America: Home of the Freedom Pit. Ironically, it’s spitting distance from Wall Street, where they knock down buildings a different way — through foreclosure.

That’s the ultimate sign of our lethargy: millions thrown out of their homes, tossed out of work, lost their life savings, retirements postponed — and they just take it. 30% interest on credit cards? It’s a good thing the Supreme Court legalized sodomy a few years ago.

Why can’t we get off our back? Is it something in the food? Actually, yes. I found out something interesting researching last week’s editorial on how we should be taxing the unhealthy things Americans put into their bodies, like sodas and junk foods and gerbils. Did you know that we eat the same high-fat, high-carb, sugar-laden shit that’s served in prisons and in religious cults to keep the subjects in a zombie-like state of lethargic compliance?

Why haven’t Americans arisen en masse to demand a strong public option? Because “The Bachelor” is on. We’re tired and our brain stems hurt from washing down French fries with McDonald’s orange drink.

The research is in: high-fat diets makes you lazy and stupid. Rats on an American diet weren’t motivated to navigate their maze and once in the maze they made more mistakes. And, instead of exercising on their wheel, they just used it to hang clothes on. Of course we can’t ban assault rifles — we’re the first generation too lazy to make its own coffee.

We’re the generation that invented the soft chocolate chip cookie: like a cookie, only not so exhausting to chew. I ask you, if the food we’re eating in America isn’t making us stupid, how come the people in Carl’s Jr. ads never think to put a napkin over their pants?

4 Responses to Bill Maher : Bald Eagle is Out. Cute Puppy is In.