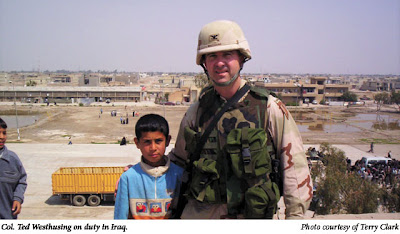 Gen. Petraeus and a High-Level Suicide in Iraq
By Greg Mitchell / April 1, 2008

The scourge of suicides among American troops in Iraq is a serious and seriously underreported problem. One of the few high-profile cases involves a much-admired Army colonel named Ted Westhusing — who, in his 2005 suicide note, pointed a finger at a then little-known U.S. general named David Petraeus. Westhusing’s widow, asked by a friend what killed this West Point scholar, had replied simply: “Iraq.”

Now there is a disturbing update on this case.

Before putting a bullet through his head, Westhusing had been deeply disturbed by abuses carried out by American contractors in Iraq, including allegations that they had witnessed or even participated in the murder of Iraqis. His suicide note included claims that his two commanders tolerated a mission based on “corruption, human right abuses and liars.” One of those commanders: the future leader of the “surge” campaign in Iraq, Gen. Petraeus.

Westhusing, 44, had been found dead in a trailer at a military base near the Baghdad airport in June 2005, a single gunshot wound to the head. At the time, he was the highest-ranking officer to die in Iraq. The Army concluded that he committed suicide with his service pistol. Westhusing was an unusual case: “one of the Army’s leading scholars of military ethics, a full professor at West Point who volunteered to serve in Iraq to be able to better teach his students. He had a doctorate in philosophy; his dissertation was an extended meditation on the meaning of honor,” as Christian Miller explained in a major Los Angeles Times piece.

“In e-mails to his family,” Miller wrote, “Westhusing seemed especially upset by one conclusion he had reached: that traditional military values such as duty, honor and country had been replaced by profit motives in Iraq, where the U.S. had come to rely heavily on contractors for jobs once done by the military.” His death followed quickly. “He was sick of money-grubbing contractors,” one official recounted.

Westhusing said that “he had not come over to Iraq for this.”

After a three-month inquiry, investigators declared Westhusing’s death a suicide. Last March, The Texas Observer published a cover story by contributor Robert Bryce titled “I Am Sullied No More.” It is featured in a chapter in my new book on Iraq and the media.

Bryce covered much of the same ground paved by Miller but added details on the Petraeus angle. Now, in the past few weeks, Bryce has added more in an update — which explores whether Westhusing was murdered.

“When he was in Iraq, Westhusing worked for one of the most famous generals in the U.S. military, David Petraeus,” Bryce observed last year. “As the head of counterterrorism and special operations under Petraeus, Westhusing oversaw the single most important task facing the U.S. military in Iraq then and now: training the Iraqi security forces.”Bryce referred to a “two-inch stack of documents, obtained over the past 15 months under the Freedom of Information Act, that provides many details of Westhusing’s suicide….The documents echo the story told by Westhusing’s friends. ‘Something he saw [in Iraq] drove him to this,’ one Army officer who was close to Westhusing said in an interview. ‘The sum of what he saw going on drove him’ to take his own life. ‘It’s because he believed in duty, honor, country that he’s dead.'”In Iraq, Westhusing worked under two generals: Maj. Gen. Joseph Fil, and Petraeus, then a lieutenant general. But Bryce continued: “By late May, Westhusing was becoming despondent over what he was seeing.” When his body was found on June, a note was found nearby addressed to Petraeus and Fil. According to Bryce it read:

“Thanks for telling me it was a good day until I briefed you. [Redacted name]–You are only interested in your career and provide no support to your staff–no msn [mission] support and you don’t care. I cannot support a msn that leads to corruption, human right abuses and liars. I am sullied–no more. I didn’t volunteer to support corrupt, money grubbing contractors, nor work for commanders only interested in themselves. I came to serve honorably and feel dishonored. I trust no Iraqi. I cannot live this way. All my love to my family, my wife and my precious children. I love you and trust you only. Death before being dishonored any more.

“Trust is essential–I don’t know who trust anymore. Why serve when you cannot accomplish the mission, when you no longer believe in the cause, when your every effort and breath to succeed meets with lies, lack of support, and selfishness? No more. Reevaluate yourselves, cdrs [commanders]. You are not what you think you are and I know it.”

Twelve days after Westhusing’s body was found, Army investigators talked with his widow, who told them: “I think Ted gave his life to let everyone know what was going on. They need to get to the bottom of it, and hope all these bad things get cleaned up.”

Bryce concluded: “In September 2005, the Army’s inspector general concluded an investigation into allegations raised in the anonymous letter to Westhusing shortly before his death. It found no basis for any of the issues raised. Although the report is redacted in places, it is clear that the investigation was aimed at determining whether Fil or Petraeus had ignored the corruption and human rights abuses allegedly occurring within the training program for Iraqi security personnel.” Since then, the corruption and failed training angles have drawn wide attention although the Petraeus’s role, good or bad, has not.

The writer returned to the case this past February with another Texas Observer article. I’ve run out of space here so I will merely quote its opening and link to it:

Since last March, when I wrote a story about the apparent suicide of Col. Ted Westhusing in Iraq, I had believed there was nothing else to write about his tragic death.

But in December, I talked to a source in the Department of Defense who met Westhusing in Iraq about three months before his death. The source, who asked not to be identified for fear of reprisals, was investigating claims of wrongdoing against military contractors working in Iraq.

After a short introduction, I asked him what he thought had happened toWesthusing. ‘I think he was killed. I honestly do. I think he was murdered,’ the source told me. ‘Maybe DOD didn’t have enough evidence to call it murder, so they called it suicide.'”

Bryce doesn’t yet back the “murder” claim but notes that Rep. Henry Waxman is now looking into the Westhusing case.

[Greg Mitchell’s new book is So Wrong for So Long: How the Press, the Pundits and the President Failed on Iraq. It features a foreword by Joe Galloway and a preface by Bruce Springsteen, and has been hailed by Arianna Huffington, Bill Moyers, Glenn Greenwald and others.]

Source. The Huffington Post.
Thanks to Jim Baldauf / The Rag Blog

This entry was posted in RagBlog and tagged Corruption, Iraq, Middle East, Military. Bookmark the permalink.