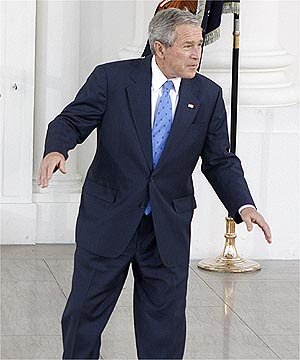 Soft Shoe in Hard Times
By Maureen Dowd / March 16, 2008
Everyone here is flummoxed about why the president is in such a fine mood.

The dollar’s crumpling, the recession’s thundering, the Dow’s bungee-jumping and the world’s disapproving, yet George Bush has turned into Gene Kelly, tap dancing and singing in a one-man review called “The Most Happy Fella.”

“I’m coming to you as an optimistic fellow,” he told the Economic Club of New York on Friday.

His manner — chortling and joshing — was in odd juxtaposition to the Fed’s bailing out the imploding Bear Stearns and his own acknowledgment that “our economy obviously is going through a tough time,” that gas prices are spiking, and that folks “are concerned about making their bills.”

He began by laughingly calling the latest news on the economic meltdown “a interesting moment” and ended by saying that “our energy policy has not been very wise” and that there was “no quick fix” on gasp-inducing gas prices.

“You know, I guess the best way to describe government policy is like a person trying to drive a car in a rough patch,” he said. “If you ever get stuck in a situation like that, you know full well it’s important not to overcorrect, because when you overcorrect you end up in the ditch.”

Dude, you’re already in the ditch.

Boy George crashed the family station wagon into the globe and now the global economy. Yet the more terrified Americans get, the more bizarrely carefree he seems. The former oilman reacted with cocky ignorance a couple of weeks ago when a reporter informed him that gas was barreling toward $4 a gallon.

In on-the-record sessions with reporters — and more candid off-the-record ones — he has seemed goofily happy in recent weeks, prickly no more but strangely liberated and ebullient.

Even though he ordinarily hates being kept waiting, he made light of it while cooling his heels for John McCain, and did a soft shoe for the White House press. Wearing a cowboy hat, he warbled a comic Western ditty at the Gridiron Dinner a week ago — alluding to Scooter Libby’s conviction, Saudis getting richer from our oil-guzzling, Brownie’s dismal Katrina performance, and Dick Cheney’s winsome habit of withholding documents.

At a dinner on Wednesday, the man who is persona non grata on the campaign trail (except for closed fund-raisers) told morose Republican members of Congress that he was totally confident that “we can retake the House” and “hold the White House.”

“I think 2008 is going to be a fabulous year for the Republican Party!” he said, sounding like Rachael Ray sprinkling paprika on goulash. That must have been news to House Republicans, who have no money, just lost the seat held by their former speaker, and are hemorrhaging incumbents as they head into a campaign marked by an incipient recession and an unpopular war.

If only they could see things as the president does. Bush, who used his family connections to avoid Vietnam, told troops serving in Afghanistan on Thursday that he is “a little envious” of their adventure there, saying it was “in some ways romantic.”

W. bragged to Republicans about his “considered judgment” in sending more troops to Iraq and again presented himself as an untroubled instrument of divine will. “I believe there’s an Almighty,” he said, “and I believe a gift of that Almighty to every man, woman and child is freedom.”

Although the president belittled the Democrats for their policy of “retreat,” his surge has been a temporary and expensive place-holder for what Americans want: a policy to get us out of Iraq.

“Has it allowed us to reduce troop levels to below where they were when it started?” Michael Kinsley wrote recently. “The answer is no.” Gen. David Petraeus told The Washington Post last week that no one in the U.S. and Iraqi governments “feels that there has been sufficient progress by any means in the area of national reconciliation.”

Maybe the president is just putting on a good face to keep up American morale, the way Herbert Hoover did after the crash of ’29, when he continued to dress in a tuxedo for dinner.

Or maybe the old Andover cheerleader really believes his own cheers, and that prosperity will turn up any time now, just like the W.M.D. in Iraq.

Or perhaps it’s a Freudian trip. Now that he’s mucked up the world and the country, he can finally stop rebelling against his dad and relax in the certainty that the Bush name will forever be associated with crash-and-burn presidencies.

Whatever the explanation, it’s plumb loco.

This entry was posted in RagBlog and tagged Bush, Iraq. Bookmark the permalink.