From the Massey Blast to the BP Spill : Fossil Fuels are Killing Us 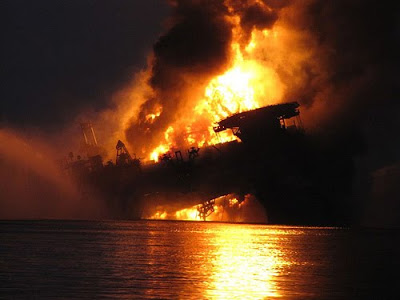 These back-to-back tragedies have brought attention to the fossil fuel industry’s terrible safety record — in both cases there were known safety violations on site, but the government did nothing to prevent disaster from occurring. See the interview below which explains how the federal government approved this BP rig and many more without conducting the environmental review they are legally obligated to.

Unlike the industry executives attempting to shift blame and avoid responsibility, we must look beneath the surface to discover the deeper meaning of these horrible crises.

Is the universe giving us a warning that fossil fuels are going to destroy us? Because if global climate change continues at the rate it has, in the not-too-distant future we will see many thousands, or even millions more deaths as crops dry up, floods destroy coastal wetlands, and diseases migrate to temperate regions. This is no joke. Families and communities are being destroyed so coal and oil corporations can boost their profit margins.

We need to be open to hearing the lessons that are all around us, especially from those who have been silenced and beaten down by capitalism.

Immediately after the Massey explosion and the BP explosion, was Earth Day — April 22. And on this date, indigenous and poor people from around the globe were meeting in Cochabamba, Bolivia, for the World People’s Conference on Climate Change, a grassroots response to the corporate fraud that was the Copenhagen Summit.

Bolivian President Evo Morales, who was proclaimed “World Hero of Mother Earth” by the United Nations General Assembly in October, hosted the conference, proclaiming “The capitalist system looks to obtain the maximum possible gain, promoting unlimited growth on a finite planet. Capitalism is the source of asymmetries and imbalance in the world.”

30,000 people from 140 countries convened and approved the “Cochabamba Protocol,” which calls for an International Climate Justice tribunal to prosecute climate criminals, and condemns REDDs which put a price on wild forests and encourage development, along with carbon market schemes. The protocal proposes a Universal Declaration of Mother Earth and demands that industrialized polluting nations cut carbon emissions by 50 percent as part of a new, binding climate agreement.

Global momentum is building towards confronting capitalism in terms of the ecological devastation it is causing. Here in the United States, Rising Tide North America is calling for a “Day of Action, Night of Mourning” this Friday, May 14, to call for BP to pay for all cleanup and long-term ecological effects of their spill, for the abolition of offshore oil drilling, and for “a rapid and just transition away from fossil fuels.” 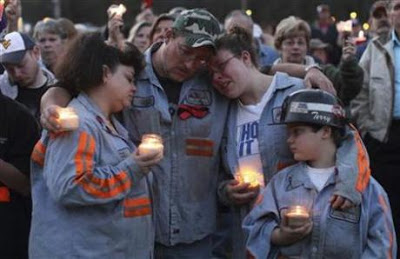 JUAN GONZALEZ: Well now to the Gulf of Mexico where the enormous oil slick in the Gulf continues to expand. Interior Secretary Ken Salazar has ordered a three-week halt to all new offshore drilling permits. Emphasizing that the companies involved had made “major mistakes,” Salazar spoke to reporters Thursday outside BP’s Houston crisis center. He noted that lifting the moratorium on new permits will depend on the outcome of a federal investigation over the Gulf spill and the recommendations to be delivered to President Obama at the end of the month.

SECRETARY KEN SALAZAR: Minerals Management Service will not be issuing any permits for the construction of new offshore wells. That process will be concluded here on May the 28th. At that point in time, we’ll make decisions about how we plan on moving forward. There is some very major mistakes that were made by companies that were involved. But today is not really the day to deal with those issues. Today and the days ahead really are about trying to get control of the problem.

JUAN GONZALEZ: Secretary Salazar added that the existing offshore oil and natural gas drilling will continue, even as public meetings to discuss new oil drilling off the Virginia coast have been canceled for this month.

AMY GOODMAN: Salazar’s announcement comes on the heel of a Washington Post exposé revealing that the Minerals Management Service had approved BP’s drilling plan in the Gulf of Mexico without any environmental review. The article notes that the agency under Secretary Salazar had quote “categorically excluded” BP’s drilling as well as hundreds of other offshore drilling permits from environmental review.

The agency was able to do this using a loophole in the National Environmental Policy Act created for minimally intrusive actions like building outhouses and hiking trails. Well, for more on this story, we’re joined now from Tucson, Arizona, by Kieran Suckling, executive director of the Center for Biological Diversity. Welcome to DEMOCRACY NOW!, Kieran. Explain this loophole, how you found it, and what it means for the Gulf.

KIERAN SUCKLING: Well, when a federal government is going to approve a project, it has to go through an environmental review. But for projects that have very, very little impact like building an outhouse or a hiking trail, they can use something called a categorical exclusion and say there’s no impact here at all so we don’t need to spend energy or time doing a review.

Well, we looked at the oil drilling permits being issued by the Minerals Management Service in the Gulf, and we were shocked to find out that they were approving hundreds of massive oil drilling permits using this categorical exclusion instead of doing a full environmental impact study. And then, we found out that BP’s drilling permit — the very one that exploded — was done under this loophole and so it was never reviewed by the federal government at all. It was just rubber-stamped.

JUAN GONZALEZ: Well, according to the Washington Post article, in one of its assessments of the agency “estimated that a large oil spill from a deep platform like the Deepwater Horizon would not exceed a total of 1,500 barrels and that a deepwater spill occurring off the intercontinental shelf would not reach the coast.” Obviously, both of those — both of those assessments have proven dramatically off the mark. As many as 250-400 waivers a year for drilling in the Gulf?

KIERAN SUCKLING: Yeah, yeah, absolutely. It’s also important to note that when the government says it’s very unlikely this spill will occur, it’s unlikely the spill will reach shore, those aren’t even the government’s own assessments. They’re just repeating what BP, Exxon, and other oil companies put in their drilling applications. And since there’s no environmental impact study, the government never actually does an independent review. So everyone is just repeating the industry’s statements as they rubber-stamp the approvals.

REPORTER: … Why BP was exempted from the environmental impact analysis?

SECRETARY ROBERT GIBBS: Yeah, well, I — the — there are a series of reviews that have to — that have to — you have to go through in order to get drilling permits. The process by which was referenced in that article is part of the review that Secretary Salazar is undergoing.

REPORTER: Robert, does the White House believe it was a mistake, for this categorical exemption to be granted to BP for Deepwater Horizon?

SECRETARY ROBERT GIBBS: That’s part of the investigation. I don’t know the answer to that.

REPORTER: Ok, so that’s something that you’re looking into presently?

SECRETARY ROBERT GIBBS: I would say as the President asked Secretary Salazar to undertake a thirty-day review of what happened, that that would certainly be part of the process under which he would evaluate.

KIERAN SUCKLING: The White House and the Department of Interior are really sort of ducking their heads on this issue right now because it’s an enormous problem. Especially since just a few months ago the Government Accountability Office came out with the report on MMS’s operations in Alaska, where they also have offshore drilling, and specifically said the agency is not doing these environmental studies properly. They’re avoiding doing them at all. And then they went ahead knowing that the GAO had just done this study and continued to put them out.

So, this is not something new. MMS knew they had a problem. In fact, when Interior Secretary Salazar first came into office, he announced ‘There’s a new Sheriff in town, I’m going to clean up this corrupt agency,’ and instead of doing that, he’s pushed them to put out more offshore oil drilling permits while not cleaning up what is clearly a broken process of doing any environmental review at all.

JUAN GONZALEZ: I want to play a clip of President Obama where he says that oil spills don’t come from rigs, but from refineries. He was speaking on April 2nd, just over two weeks before the explosion of the Deepwater Horizon rig.

PRESIDENT BARACK OBAMA: I want to put out, by the way, that oil rigs today generally don’t cause spills. They are technologically very advanced. Even during Katrina, the spills didn’t come from the oil rigs, they came from the refineries onshore.

KIERAN SUCKLING: Yeah, I mean, I think what the President has said here is actually just very, very critical, because he is repeating, and I suspect without even knowing it, the big lie of offshore oil drilling. For decades, the oil companies and the Minerals Management Services have told us, ‘Oil drilling is safe, it’s fine, that’s not where oil spills come from.’

In fact, that’s the basis of not doing any environmental review is, you simply assert it will never be a problem, therefore, you don’t even have to study it. When it’s true that they don’t leak often, but when they do leak, it’s absolutely catastrophic. It’s very similar to nuclear power plants. They don’t often fail, but when they fail it’s catastrophic. And, therefore, you have to plan for catastrophe. You have to do very intensive environmental analysis, not simply say, ’It’s rare, so we can ignore it.’

AMY GOODMAN: Kieran Suckling, what do think has to happen right now?

KIERAN SUCKLING: Well, first off, I think that the President should announce a complete moratorium on all new offshore oil drilling. This three-week time-out is really too little, too late. And it’s very important to do that now because the president, under the urging of Secretary of Interior Ken Salazar, has planned to open up new offshore oil drilling in Alaska, in the eastern Gulf of Mexico, and on the Atlantic coast. And that just needs to end. It’s not safe anywhere, anytime.

Secondly, the president should immediately revoke existing oil permits and especially in Alaska. Shell Oil, this July, has… is going to start doing offshore oil drilling in the Chukchi Sea of Alaska. And if you think it’s difficult to clean up oil in the relatively warm, calm Gulf of Mexico, imagine trying to do this with icebergs and sea ice, 20 hours of darkness in the Arctic oceans. It just cannot be done. If this spill had happened in Alaska, its magnitude would have been10 times worse than has happened in the Gulf.

AMY GOODMAN: Well, Kieran Suckling, we want to thank you very much for being with us, Executive Director of the Center for Biological Diversity speaking to us from Tucson, Arizona. This is Democracy Now!, democracynow.org, the War and Peace Report…