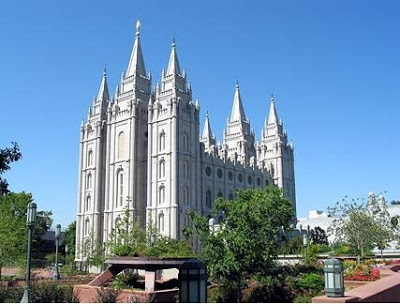 SALT LAKE CITY — Utah’s growing tourism industry and the star-studded Sundance Film Festival are being targeted for a boycott by bloggers, gay rights activists and others seeking to punish the Mormon church for its aggressive promotion of California’s ban on gay marriage.

It could be a heavy price to pay. Tourism brings in $6 billion a year to Utah, with world-class skiing, the spectacular red rock country and the film festival founded by Robert Redford among the state’s popular tourist draws.

“At a fundamental level, the Utah Mormons crossed the line on this one,” said gay rights activist John Aravosis, an influential Washington, D.C-based blogger. “They just took marriage away from 20,000 couples and made their children bastards. You don’t do that and get away with it.”

Salt Lake City is the world headquarters for The Church of Jesus Christ of Latter-day Saints, which counts about 62 percent of Utah residents as members.

The church encouraged its members to work to pass California’s Proposition 8 by volunteering their time and money for the campaign. Thousands of Mormons worked as grassroots volunteers and gave tens of millions of dollars to the campaign.

The ballot measure passed Tuesday [November 5]. It amends the California Constitution to define marriage as a heterosexual act, overriding a state Supreme Court ruling that briefly gave same-sex couples the right to wed.

The backlash against the church – and by extension Utah – has been immediate. Protests erupted outside Mormon temples, Facebook groups formed telling people to boycott Utah and Web sites such as mormonsstoleourrights.com began popping up, calling for an end to the church’s tax-exempt status.

Aravosis is the editor of the popular political blog, americablog.com, which has about 900,000 unique monthly visitors.

He’s calling for skiers to choose any state but Utah and for Hollywood actors and directors to pull out of the Sundance Film Festival. Other bloggers and readers have responded to his call.

“There’s a movement afoot and large donors are involved who are very interested in organizing a campaign, because I do not believe in frivolous boycotts,” said Aravosis, who has helped organize boycotts against Dr. Laura’s television show, Microsoft and Ford over gay rights issues. “The main focus is going to be going after the Utah brand. At this point, honestly, we’re going to destroy the Utah brand. It is a hate state.”

Messages left with a Sundance spokeswoman Thursday and Friday were not immediately returned.

Leigh von der Esch, managing director of the Utah Office of Tourism, said she’s aware that there’s been discussion of a boycott, but her office hadn’t received any calls about it Thursday. State offices are closed Friday.

“We’re respectful of both sides of the equation and realize it’s an emotional issue, but we are here promoting what we think is the best state in the country,” she said.

Jim Key, spokesman for the L.A. Gay & Lesbian Center, said he had heard little about a call to boycott Utah.

The irony in the attack on Utah’s tourism industry is that it would likely do the most harm in Salt Lake City and Park City – two of the state’s most liberal cities and those with some of the smallest percentages of Mormons in the state.

“Even though Salt Lake City is the location of the headquarters of the LDS church, there are really good people here … in Utah that are sympathetic to our cause,” said Scott McCoy, an openly gay state senator from Salt Lake City. “Rather than a boycott, I would rather have every gay person in the country come to Utah and show the people of Utah what genuine wonderful people and families we have, and to help educate them that we deserve the exact same legal rights and protections they and their families are afforded under the law.”

What kind of economic, religious or political impact, if any, a boycott might have is unclear. The Mormon church has members all over the world and no plans to change its stance on gay marriage. A church spokeswoman did not immediately have a comment on a possible boycott Friday. The church issued a statement following Tuesday’s vote and again on Friday calling for civility in the wake of the results.

“It is disturbing that The Church of Jesus Christ of Latter-day Saints is being singled out for speaking up as part of its democratic right in a free election,” Friday’s statement says, in part.

“Once again, we call on those involved in the debate over same-sex marriage to act in a spirit of mutual respect and civility towards each other. No one on either side of the question should be vilified, harassed or subject to erroneous information.

Bob Malone, CEO and president of the Park City Chamber of Commerce and Visitors Bureau, said he worked in Colorado in the early 1990s when it was targeted for a boycott following a law that prohibited cities from enacting protective legislation for gays and lesbians.

“You know, it had some legs at the very beginning. But it’s one of those things when you don’t know when it starts and when it ends because you really can’t measure it,” he said.

Malone, who serves on the state tourism board, said it is unfair to try to punish certain industries or parts of the state over an issue it had nothing to do with.

“It’s really not a Park City thing, and I don’t see it as a state thing. That was more of a religious issue,” he said. “To sweep people in who really have nothing to do with that issue and have no influence over religious issues – it’s sad that people kind of think that and say, ‘We’re going to bury you.’ It’s sad to hear people talk like that.”