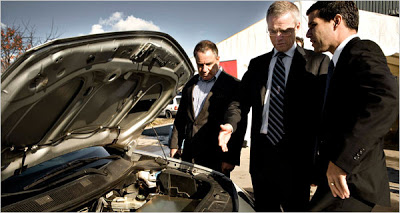 SAN FRANCISCO — The State of Hawaii and the Hawaiian Electric Company on Tuesday endorsed an effort to build an alternative transportation system based on electric vehicles with swappable batteries and an “intelligent” battery recharging network.

The plan, the brainchild of the former Silicon Valley software executive Shai Agassi, is an effort to overcome the major hurdles to electric cars — slow battery recharging and limited availability.

Mr. Agassi has succeeded in assembling a growing consortium of national governments, regional planning organizations and one major car company. Tuesday’s announcement follows earlier endorsements from Israel, Denmark, Australia, Renault-Nissan and a coalition of Northern California localities supporting the idea leading to the deployment of an electric vehicle with a range of greater than 100 miles, beginning at the end of 2010 in Israel. The company plans test deployments of vehicles in 2009 and broad commercial sales in 2012.

Mr. Agassi has raised $200 million in private financing for his idea. In October, he obtained a commitment from the Macquarie Capital Group to raise an additional $1 billion for an Australian project.

On Tuesday, he said that he was optimistic about his project despite the dismal investment and credit markets because his network could provide investors with an annuity. Users of his recharging network would subscribe to the service, paying for access and for the miles they drive.

Given the downturn in the mortgage market, he said that investors are looking for new classes of assets that will provide dependable revenue streams over many years. “I believe the new asset class is batteries,” he said. “When you have a driver in a car using a battery, nobody is going to cut their subscription and stop driving.”

Mr. Agassi has argued that even if oil prices continued to decline, his electric recharging network — which ideally would use renewable energy sources like solar and wind — could provide competitively priced energy for a new class of vehicles.

He supposes that his network idea will be appropriate first for “island” economies that typically have significantly higher energy costs, and then will become more cost-competitive as it is scaled up.

“We always knew Hawaii would be the perfect model,” he said in a telephone interview. “The typical driving plan is low and leisurely, and people are smiling.”

Hawaii is a relatively small market with high energy costs. The state has about 1.2 million cars and replaces 70,000 to 120,000 vehicles annually.

Drivers on the islands also rarely make trips of more than 100 miles, meaning there will be less need for his proposed battery recharging stations. Part of Mr. Agassi’s model depends on quick-change service stations to swap batteries for drivers who need to use their cars before they have completely recharged their batteries.

Peter Rosegg, a spokesman for the Hawaiian Electric Company, said that Better Place would become a major customer for electricity and was also planning to invest in renewable energy sources that would be connected to the electric grid.

“It’s going to be a nonexclusive agreement, but so far they’re the only one that has shown up,” Mr. Rosegg said.

In late November, the mayors of San Francisco and other major Bay Area cities endorsed the Better Place network to help create an electric recharging network by 2012. The company estimates that it will cost $1 billion to build a charging network in the Bay Area that may create as many as half a million charging stations.

Despite challenges, the Better Place model is promising, said Daniel M. Kammen, a professor in the Energy and Resources Group at the University of California, Berkeley. It could appeal to owners of fleets of vehicles and to early adopter customers who are willing to work through the difficulties that will inevitably accompany a new transportation system. “It has a lot of promising features,” he said.