No one was blinder to the criminality of Noriega, who was on the CIA payroll, than George Herbert Walker Bush. 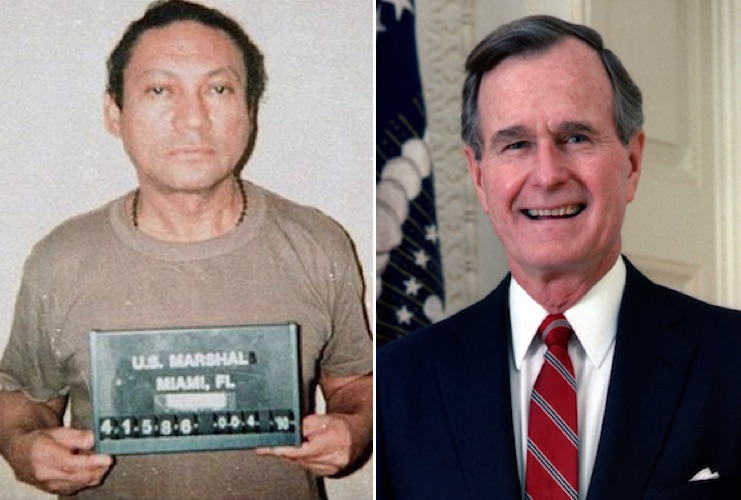 Two for the ages: Noriega and Bush. Images from Wikimedia Commons.

QUITO, Ecuador — Manuel Noriega, former president of Panama, died in prison May 28 at 83 after decades in custody. What exactly was his crime? He was a monster who turned on his enabler: George Herbert Walker Bush. Though Bush, 92, is not yet technically dead, he and Noriega will soon be chained together in Hell for all eternity.

George H.W. Bush was born not merely into wealth and privilege but into the elite financial fraternity that built the modern American national security state. His father, Prescott, along with Allen and John Foster Dulles, invested heavily in Nazi Germany, before and after the rise of Hitler. Under the Trading with the Enemy Act, the U.S. government seized the Union Banking Corporation for harboring millions in Nazi money. Prescott Bush was one of the bank’s six directors. Other companies Prescott was involved with also had their assets seized by the government.

But Prescott skated away, later becoming a U.S. Senator from Connecticut and a frequent golfing partner of President Eisenhower. The Dulles brothers suffered no adverse consequences from their profitable Nazi collusion either. John Foster, who served on the board of I.G. Farben, the builder of Auschwitz, became Eisenhower’s Secretary of State. Allen, who transacted billions of dollars of business with Nazi Germany in Switzerland, later headed up the CIA.

Bush went from prep school into Skull and Bones at Yale, ground zero for CIA recruitment.

Like his father before him and his son after him, George Herbert Walker Bush went from prep school into Skull and Bones at Yale, ground zero for CIA recruitment. Armed with a sense of entitlement, immunity, and family money, Bush started Zapata Petroleum, later Zapata Offshore, which drilled wells off Cuba and Kuwait. Zapata’s lack of profitability led some Bush chroniclers to speculate that Zapata may have operated as an “intelligence front.” J. Edgar Hoover’s 1963 memo referring to “Mr. George Bush of the Central Intelligence Agency” seems to confirm his early intelligence role, though Bush and the CIA denied it.

Bush quit Zapata to enter Texas politics. When he lost a U.S. Senate race President Nixon appointed him Ambassador to the United Nations. In 1973 Nixon made Bush chairman of the Republican National Committee, as the presidency succumbed to Watergate. After Nixon resigned in August 1974, the new president, Ford, sent Bush to represent the United States in China, far from Watergate fallout. Late in 1975 Ford nominated Bush to be CIA Director. But his nomination met with resistance.

Watergate revelations of CIA aid to White House domestic political operations made the agency vulnerable to attack. Senator Frank Church, who led the Senate probe, called the CIA a “rogue elephant” and a “self-generating enterprise” that was “trying to control other countries through the covert manipulation of their affairs.”

After contentious confirmation hearings, Bush became the CIA Director. But neither he nor President Ford had any appetite for reform. Bush’s protective approach to the CIA gave the embattled agency breathing room and a lasting gratitude to George Herbert Walker Bush. The new CIA headquarters in Langley, Virginia, bears his name. It was then that Bush first met Manuel Noriega.

Noriega was born poor in Panama City in 1934.

Noriega was born poor in Panama City in 1934. He went to military school and rose through the ranks of the National Guard. As a junior officer he took courses at the School of the Americas, then headquartered in the U.S. Panama Canal Zone. He became a supporter of Omar Torrijos, who led a 1968 coup against the President of Panama and made Noriega chief of military intelligence. As president, Torrijos negotiated a treaty with U.S. President Jimmy Carter ensuring that control of the Panama Canal Zone would revert to Panama in 1999.

By the time Noriega met Bush in 1976, he had already been on the CIA payroll for years. He acted as a conduit for U.S. money and weapons to the Contra militants in Nicaragua. He allowed the CIA to establish listening posts in Panama and assisted the Salvadoran government against leftist rebels there. The U.S. had known about Noriega’s drug trafficking since the 1960s, but shielded him from investigation.

Throughout the 1970s and 1980s, Noriega was able to manipulate U.S. policy toward his country, while skillfully accumulating near-absolute power in Panama. It is clear that each U.S. government agency which had a relationship with Noriega turned a blind eye to his corruption and drug dealing, even as he was emerging as a key player on behalf of the Medellin Cartel…

No one’s eye was blinder to Noriega’s criminality than that of George Herbert Walker Bush, who increased Noriega’s salary, despite his unsavory reputation. When Carter became president in 1977 he replaced Bush at the CIA with Admiral Stansfield Turner, who promptly fired Noriega. But when Reagan won the White House in 1980, with Bush as his vice president, Bush made sure the CIA rehired the Panamanian.

By the time Noriega became Panama’s dictator in 1983, the Reagan-Bush administration was paying him $165,000 to $200,000 annually. Noriega proved helpful as Reagan expanded his secret war against Nicaragua’s Sandinista government in the 1980s, keeping a smooth flow through Panama of arms to the Contras. Weakened by his advanced age and advancing dementia, and the bullet he took during an attempt on his life, Ronald Reagan left a power vacuum in the White House that Bush and his smooth Houston lawyer pal, James Baker, were happy to fill.

As Bush prepared to run for president in 1987, a Newsweek cover story on him entitled “Fighting the Wimp Factor,” highlighted his image problem. He decided to attack Manuel Noriega. Noriega’s power had begun to weaken. His strongest U.S. allies — William Casey and Oliver North — were gone. He was indicted in Florida for drug trafficking. Reagan offered to drop the indictments if Noriega left Panama. But Bush and Baker did not want to be seen cutting deals with a drug dictator and looking wimpy.

At midnight, December 19, 1989, President George Herbert Walker Bush sent 26,000 U.S. troops — in the largest combat operation since Vietnam — to invade Panama, for the ostensible reason of bringing Manual Noriega to trial in the United States on drug charges and liberating Panama from his dictatorship. Mainstream American media broadcast the Bush claims without comment. Nor did they contest the official U.S. figure of 250 deaths from the attack.

Barbara Trent’s 1993 Oscar-winning documentary, The Panama Deception, revealed a very different reality in Panama. Her film shows the terrible physical destruction in Panama’s working-class neighborhoods. She discovered that the dead actually numbered between 2,500 and 4,000, along with 18,000 residents forced into detention centers and another 7,000 arrested without charges. She shows some of the mass graves where U.S. forces dumped thousands of bodies and interviewed detainees still warehoused in Panama years after the invasion. What Bush called a “liberation” she exposed as a gratuitous massacre.

Trent also uncovered the real reason for the invasion: to destroy the Panama Defense Forces (PDF), thus stopping the gradual turnover of the Panama Canal to the Panamanians, scheduled to begin 10 days after the invasion. By the terms of the treaty, signed by President Carter in 1978, the United States would cede sovereignty of the canal to Panama unless Panama was incapable of defending it.

Having destroyed the PDF, the United States passed a law in 1991 to ensure continued U.S. presence in the Canal Zone on the grounds that Panama could not defend it. Chutzpah of a high order. Trent also learned that U.S. forces used the invasion to test new, unheard-of weapons on the Panamanian people, a kind of dress rehearsal for the Persian Gulf War the following year.

Trent’s powerful, important film is available to view in its entirety right now on YouTube. It’s a scathing indictment, not only of U.S. government hypocrisy and brutality, but of the complicit U.S. media that will not and does not question the deceptive, murderous practices of our government. PBS refused to screen Trent’s film, but as many Americans as possible need to see it. Its messages remain urgent.

Noriega hid in the Vatican embassy for several days after the Bush invasion, finally surrendering to spend the rest of his life in prison. For his cynicism and his vanity, using a massive invasion and the murder of thousands of Panamanians to distract from the economic problems of his presidency and dispel the onus of “the wimp factor,” George Herbert Walker Bush deserves to be remembered as a war criminal and an extreme violator of human rights, a disgrace to the presidency and to the species.

On our next episode of Chained Together in Hell, Bill Clinton will be affixed to Janet Reno, his co-conspirator in the unnecessary 1993 massacre of 76 people in Waco, Texas, including 16 children under the age of 10. On his other side, Clinton will be chained to Madeleine Albright, who said that a U.S. blockade of Iraq that killed half a million Iraqi children was “worth it.” Reno and Albright are two of the very few women Clinton did not covet while on this earth.