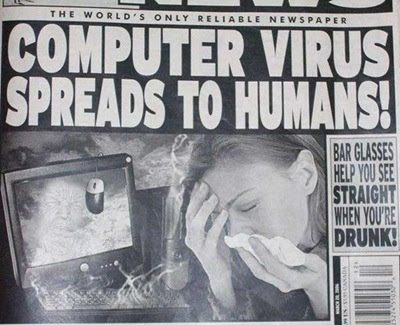 You know what’s funny and cute and just a little bit sad? Wacky old pre-industrial war-hungry guys admitting they don’t know a computer from a microwave oven, a hyperlink from a heart med, can’t turn on one of those newfangled PC things if his life depended on it and/or he wanted to see what his weird tattooed bi-curious grandson is posting on his MySpace home docking station whateveryoucallit. Adorable!

Cuter still is when said wisecrackin’ curmudgeon admits he depends on the wife to show him how it all works, to log on and open a browser and check e-mail and describe what it all might mean out there in Interweb Cybertown, as you get the distinct feeling the old guy has no idea what makes it go and believes all this crazy gizmongery is for troublemakin’ whippersnappers anyway, as he pines for the days of teletype machines and prop aeroplanes. Charming!

Or, you know, maybe not. Because you know what’s depressing and just a bit beyond sad? A serious presidential candidate — that is to say, yours — who thinks it’s harmless that he’s actually one of those guys, who admits he’s a complete Luddite when it comes to computers and, by extension, most every aspect of modern multimedia and technology, except perhaps the exact specs of the nuke required to annihilate Iran and/or take out a big pile of “gooks.”

See, word has gotten out. Your boy John McCain says has no clue how to work a computer. He’s an admitted tech illiterate, couldn’t Google his way out of a DailyKos to save his Yahoo.

But here’s the disturbing part: This confession of ignorance apparently bothers him and his campaign not at all, as they apparently believe any sort of tech know-how isn’t really required to run our deeply busted-up ship of state, that you need no real firsthand experience with the most definitive technology of the past 100 years to make decisions that affect the entire planet. Go figure.

So then, the valid question: Is it a big deal? Should you care? Because McCain’s I’m-just-a-clueless-old-guy comment has caused a bit a stir, with anyone with a functioning DSL line calling it a bit of an embarrassment, a bit like running for captain of the swim team while admitting all you know how to do is splash around in the bathtub. Gosh, Senator, don’t you think you need just a passing understanding of the culture in which you live to qualify you to oversee the damnable place? Doesn’t it help?

Maybe not. Maybe McCain’s apologists are right, the POTUS really doesn’t need to have a working knowledge of what hundreds of millions of people use every day to live, work, communicate, shop and blog and breed and porn and tube and book. Hell, just look at President Bush — still giggles every time Laura plugs in the air popcorn popper, has an Irish drinking song as a ringtone, enjoys a working grasp of the English language that borders on infantile. Really, who says a president has to be even modestly versed in the culture of his or her day? Or even passably competent?

But then, that’s not really the point, is it? The point, of course, is about social interconnection. It’s about understanding the basic workings of one of the most powerful, fundamental engines of modern society, its staggering impact and consequence and reach. To not use or comprehend computers and the Net in 2008 is to basically confess to your own cultural irrelevance.

Maybe a short lesson, then? Shall we offer a bit of help to McCain and his hapless crew? Couldn’t hurt.

Look here, Senator, this is a link. You click it to take you somewhere else on the Web. Here’s an example: When we click this link we see this page of — oh I’m sorry, this appears to be a big list of your most significant and appalling flip-flops, major issues you’ve reversed yourself on over weeks, months, years. Goodness, there sure are a lot of them.

Well, let’s scroll around a bit — scrolling is how you move up and down a large page to take it all in. As we move down here … oh look, here’s information about your famed McCain-Feingold bill on campaign finance reform. Except, oh dear, it appears you’re no longer connected to the most high-profile legislation of your career. Heck, now that you’re running for prez and need all the cash you can muster, who wants finance reform? I understand. What a maverick you are. Well, let’s move on.

Here are nice video clips of you decrying the ugly forces of the religious right, and then later kissing Falwell’s fat, nauseating ring. And here’s you trashing Bush’s useless tax cuts for the wealthy, then completely flopping over and supporting them. And whoops, gay marriage might be OK, then it’s definitely not. Torture is absolutely wrong, then it’s not. You say you’re rather clueless about the economy and will need some lessons in basic finance, then here’s you denying outright that you ever said that. Isn’t technology amazing, Senator?

Wow, there sure is a lot of information about your bizarre inconsistency on just about every issue of note. Immigration, energy, health care reform, offshore drilling, Social Security, Roe v. Wade, and, oh my goodness, the Iraq war? You really are all over the place. One thing’s for certain, though: your position on war and violence and America as ruthless pre-emptive aggressor, well, let’s just say you can sometimes make Dick Cheney look like a peacenik. Scary.

Ah, but it’s not all bad. To be fair, there is good amount of evidence of your past battles against Big Money, proof that you truly earned your maverick status in numerous contentious fights against special interests, lobbyists, Big Tobacco, ethanol subsidies (even Barack Obama won’t touch that one), Big Sugar, et al. Your record is — or rather, was — impressive.

Not anymore. It’s amazing what a taste of serious power will do to a man’s values, no? Don’t worry, it’s happening to your rival Obama, too — albeit to a far lesser degree. Hell, it happens to them all. This is another mandatory lesson about the Web, Senator. While it can certainly be a bit unfair and extreme, it’s also startlingly effective in how it tracks of the ugly erosion of your soul.

Maybe we should stop the lesson now. I think I’m beginning to see just why you don’t want to know how to use these hateful little gizmos. Damn things have a painful ability to tell the truth, to keep a dynamic, revealing record of your general inability to understand not just what’s really going on in the world, but what’s going on in your own muddled, fuzzy, increasingly dangerous mind. Ah, modern technology. Ain’t it a bitch?