John Pilger : The Kidnapping of Haiti 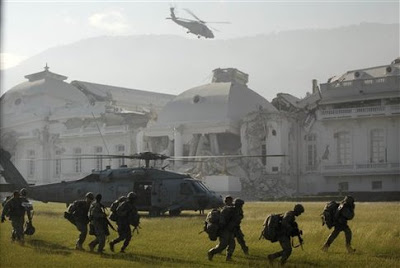 [In this article, which originally appeared in the British New Statesman on January 28, 2010, John Pilger describes the “swift and crude” appropriation of earthquake-ravaged Haiti by the militarized Obama administration. With George W. Bush attending to the “relief effort” and Bill Clinton the UN’s man, The Comedians, Graham Greene’s dark novel about exploited Haiti comes to mind.]

The theft of Haiti has been swift and crude. On January 22, the United States secured “formal approval” from the United Nations to take over all air and sea ports in Haiti, and to “secure” roads. No Haitian signed the agreement, which has no basis in law. Power rules in an American naval blockade and the arrival of 13,000 marines, special forces, spooks and mercenaries, none with humanitarian relief training.

The airport in the capital, Port-au-Prince, is now an American military base and relief flights have been re-routed to the Dominican Republic. All flights stopped for three hours for the arrival of Hillary Clinton. Critically injured Haitians waited unaided as 800 American residents in Haiti were fed, watered and evacuated. Six days passed before the U.S. Air Force dropped bottled water to people suffering thirst and dehydration.

The first TV reports played a critical role, giving the impression of widespread criminal mayhem. Matt Frei, the BBC reporter dispatched from Washington, seemed on the point of hyperventilation as he brayed about the “violence” and need for “security.”

In spite of the demonstrable dignity of the earthquake victims, and evidence of citizens’ groups toiling unaided to rescue people, and even an American general’s assessment that the violence in Haiti was considerably less than before the earthquake, Frei claimed that “looting is the only industry” and “the dignity of Haiti’s past is long forgotten.”

Thus, a history of unerring U.S. violence and exploitation in Haiti was consigned to the victims. “There’s no doubt,” reported Frei in the aftermath of America’s bloody invasion of Iraq in 2003, “that the desire to bring good, to bring American values to the rest of the world, and especially now to the Middle East… is now increasingly tied up with military power.”

In a sense, he was right. Never before in so-called peacetime have human relations been as militarized by rapacious power. Never before has an American president subordinated his government to the military establishment of his discredited predecessor, as Barack Obama has done. In pursuing George W. Bush’s policy of war and domination, Obama has sought from Congress an unprecedented military budget in excess of $700 billion. He has become, in effect, the spokesman for a military coup.

For the people of Haiti the implications are clear, if grotesque. With U.S. troops in control of their country, Obama has appointed George W. Bush to the “relief effort”: a parody surely lifted from Graham Greene’s The Comedians, set in Papa Doc’s Haiti. As president, Bush’s relief effort following Hurricane Katrina in 2005 amounted to an ethnic cleansing of many of New Orleans’ black population.

In 2004, he ordered the kidnapping of the democratically-elected prime minister of Haiti, Jean-Bertrand Aristide, and exiled him in Africa. The popular Aristide had had the temerity to legislate modest reforms, such as a minimum wage for those who toil in Haiti’s sweatshops.

When I was last in Haiti, I watched very young girls stooped in front of whirring, hissing, binding machines at the Port-au-Prince Superior Baseball Plant. Many had swollen eyes and lacerated arms. I produced a camera and was thrown out. Haiti is where America makes the equipment for its hallowed national game, for next to nothing. Haiti is where Walt Disney contractors make Mickey Mouse pajamas, for next to nothing.

The U.S. controls Haiti’s sugar, bauxite, and sisal. Rice-growing was replaced by imported American rice, driving people into the cities and towns and jerry-built housing. Year after year, Haiti was invaded by U.S. marines, infamous for atrocities that have been their specialty from the Philippines to Afghanistan.

Bill Clinton is another comedian, having got himself appointed the UN’s man in Haiti. Once fawned upon by the BBC as “Mr. Nice Guy… bringing democracy back to a sad and troubled land,” Clinton is Haiti’s most notorious privateer, demanding de-regulation of the economy for the benefit of the sweatshop barons. Lately, he has been promoting a $55 million deal to turn the north of Haiti into an American-annexed “tourist playground.”

Not for tourists is the U.S. building its fifth biggest embassy in Port-au-Prince. Oil was found in Haiti’s waters decades ago and the U.S. has kept it in reserve until the Middle East begins to run dry. More urgently, an occupied Haiti has a strategic importance in Washington’s “rollback” plans for Latin America. The goal is the overthrow of the popular democracies in Venezuela, Bolivia and Ecuador, control of Venezuela’s abundant oil reserves and sabotage of the growing regional cooperation that has given millions their first taste of an economic and social justice long denied by U.S.-sponsored regimes.

The first rollback success came last year with the coup against President Jose Manuel Zelaya in Honduras who also dared advocate a minimum wage and that the rich pay tax. Obama’s secret support for the illegal regime carries a clear warning to vulnerable governments in central America. Last October, the regime in Colombia, long bankrolled by Washington and supported by death squads, handed the U.S. seven military bases to, according to U.S. air force documents, “combat anti-US governments in the region”.

Media propaganda has laid the ground for what may well be Obama’s next war. On December 14, researchers at the University of West England published first findings of a ten-year study of the BBC’s reporting of Venezuela. Of 304 BBC reports, only three mentioned any of the historic reforms of the Chavez government, while the majority denigrated Chavez’s extraordinary democratic record, at one point comparing him to Hitler.

Such distortion and its attendant servitude to western power are rife across the Anglo-American corporate media. People who struggle for a better life, or for life itself, from Venezuela to Honduras to Haiti, deserve our support.

[Australian-born John Pilger is a renowned journalist, author and Academy award-winning documentary filmmaker who lives in London. He was a front-line war correspondent in Vietnam, and his writing has appeared in newspapers around the world. He has twice won British journalism’s top award and in 2009 he was awarded the Sydney Peace Prize, Australia’s international human rights award.]

5 Responses to John Pilger : The Kidnapping of Haiti