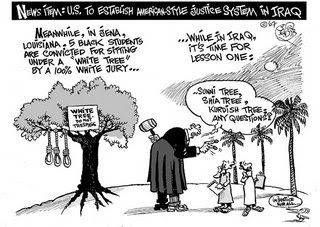 No Standing to Lecture on Justice
By JACOB HORNBERGER

U.S. officials are hopping mad over the outcome of a criminal prosecution in Iraq. Two Iraqi officials who had been accused of kidnapping and murder walked out of an Iraqi court Monday as free men after the prosecutor moved to drop the case for lack of evidence. The two men were former Iraqi Health Ministry officials. The case was being tried in the multimillion-dollar Rule of Law Complex, which is quite a site to behold.

Why were the American officials, who chose to remain anonymous, so angry and upset? Because the prosecutor’s decision was not in accord with what American officials felt should have been done. They felt that the defendants should have been prosecuted and convicted. According to one anonymous U.S. official quoted in the Washington Post, the dropping of the charges “shows that the judicial system in Iraq is horribly broken.”

After all, let’s not forget the U.S. government’s model “judicial” system in Cuba. It’s “principles” include:

1. The accused are denied the right to an independent judiciary to preside over their case. Instead, the trials are conducted by military tribunals headed by biased U.S. military officials who answer to President Bush as their commander in chief.

2. Trial by an impartial jury is not permitted. The guilt or innocence of the accused is decided by military officials who have to answer to President Bush as their commander in chief.

3. The judges get to make up the rules of procedure as they go along, producing a perfect model of arbitrariness at every step of the proceeding.

4. The accused are denied speedy trials. Some of them have been incarcerated for several years without trial.

5. The accused are tortured into confessing their guilt.

6. Evidence acquired by torture can be used to convict the accused.

7. Hearsay evidence is admissible to convict the accused.

8. Defendants are not guaranteed the right to confront their witnesses and cross-examine them.

9. Cruel and unusual punishments, including torture, can be inflicted on the defendants, even before conviction.

10. Defendants are denied the right to habeas corpus.

In fact, it’s entirely appropriate that this despicable and shameful kangaroo system is located in Cuba because it is quite similar to the one run by Fidel Castro’s minions on the other side of the island. One thing is for sure: the U.S. government’s model “judicial” system in Cuba flies in the face of every procedural principle of due process enunciated in the U.S. Constitution and the Bill of Rights.

Also, it’s ironic that the judicial complex in Iraq is called the Rule of Law Center, given it would be difficult to find a better example of a violation of the “rule of the law” than the U.S. government’s arbitrary post-9/11 power to send accused terrorists either down the federal-court route or the kangaroo military-tribunal route.

We also shouldn’t forget the U.S. government’s kidnappings, torture, rendition, torture-through-proxy, indefinite incarceration, murder, disappearances of detainees, spying, and warrantless searches, along with its practice of granting immunity to U.S. officials and their compatriots in the private sector who commit such crimes.

The best thing that U.S. officials could do is close down their kangaroo “judicial” tribunal system at Guantanamo Bay, transfer all prisoners to the jurisdiction of U.S. federal courts, leave the Iraqi people alone, and stop lecturing the world on law and justice. It would be a good first step toward restoring America’s moral standing in the world.