Marc Estrin : The Ethics of Infiltration 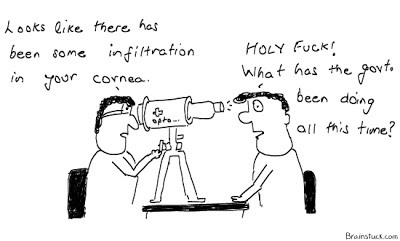 Cartoon from Brainstuck.com.
THE ETHICS OF INFILTRATION

We began two weeks ago with Hallelujah in the mall, and last week contrasted that with theatrical infiltrations less in service to consumer capitalism.

When I began publishing these in various theater journals, I was met with a storm of protesting letters concerning my unethical “manipulation” of the poor bystanders. I wrote a piece in response describing what I thought to be a continuum of manipulations, from those which decreased understanding and degrees of freedom to those which increased them.

It might be good to look at such a continuum in the light of what is going on today. Let’s start with the bad news:

A recent article by George Monbiot reports a training session organized by the right wing libertarian group, American Majority on “How to Manipulate the Medium”:

Here’s what I do. I get on Amazon; I type in “Liberal Books.” I go through and I say “one star, one star, one star.” The flipside is you go to a conservative/libertarian whatever, go to their products and give them five stars… This is where your kids get information: Rotten Tomatoes, Flixster. These are places where you can rate movies. So when you type in “Movies on Healthcare,” I don’t want Michael Moore’s to come up, so I always give it bad ratings. I spend about 30 minutes a day, just click, click, click, click… If there’s a place to comment, a place to rate, a place to share information, you have to do it. That’s how you control the online dialogue and give our ideas a fighting chance.

On a wider scale, we have the current Israeli government support for a special undercover team of workers paid to surf the internet and spread positive news about Israel. The deputy director of the Foreign Ministry’s hasbara (“public diplomacy,” aka propaganda) department has admitted the team will be working undercover:

Our people will not say: “Hello, I am from the hasbara department of the Israeli Foreign Ministry and I want to tell you the following.” Nor will they necessarily identify themselves as Israelis, he said. They will speak as net-surfers and as citizens, and will write responses that will look personal but will be based on a prepared list of messages that the foreign ministry developed.

The new team is expected to increase the ministry’s close coordination with a private advocacy group, giyus.org (Give Israel Your United Support). About 50,000 activists are reported to have downloaded a program called Megaphone that sends an alert to their computers when an article critical of Israel is published. They are then supposed to bombard the site with comments supporting Israel.

A justification for much of this — a story we broke on The Rag Blog — was shamefully enunciated by our own government’s Cass Sunstein — Obama’s Harvard Law School bud, and recently appointed Administrator of the White House Office of Information and Regulatory Affairs.

[W]e suggest a distinctive tactic for breaking up the hard core of extremists who supply conspiracy theories: cognitive infiltration of extremist groups, whereby government agents or their allies (acting either virtually or in real space, and either openly or anonymously) will undermine the crippled epistemology of believers by planting doubts about the theories and stylized facts that circulate within such groups, thereby introducing beneficial cognitive diversity.

From cognitive infiltration of websites, groups and meetings, it is a short enough step to the entrapments by agents provocateur we read about so commonly today. The missteps of suckered individuals have enormous life consequences — for them, and for all of us — in the age of Patriot Act paranoia and power.

If these kind of infiltrations populate one end of the continuum, what is the other end – the “good” end?

The most obvious current example lies in the operation of Wikileaks and the brave individuals that feed it sequestered material. A person working in a dishonest, destructive organization has every right to transform him or herself into an infiltrator, making available to Wikileaks or other publicity groups secret material the organization would otherwise have hidden.

As Julian Assange wrote on the Wikileaks homepage, “The goal is justice; the method is transparency.” It is paradoxical that it takes invisible infiltration to create public transparency, but there it is, and the effectiveness of this tactic can no longer be in question. Nor can the public good resulting.

While the theatrical infiltrations I described last week may be trivial compared to these larger examples, both good and bad, they do raise the question of whether all arts — Art itself — does not function as an infiltration.

One innocently goes to a bookstore to buy a book. But the contents of that book, if it be a good one, will infiltrate and infect one’s heartmind. The infiltrating virus will lie within, creating biopsychical response, spiritual molecules unlabeled, unacknowledged, perhaps unknown, but potentially agents provocateur for new thinking and action.

It is with this infiltrating image in mind that my wife, Donna, and I have recently begun a new publication project called Fomite. A fomite is a medium capable of transmitting infectious organisms from one individual to another.

“The activity of art is based on the capacity of people to be infected by the feelings of others.” — Tolstoy, What is Art?

Art, writing, music are the kinds of infiltrations which — if ethically and mindfully done — have the capacity to increase, not decrease, degrees of freedom.