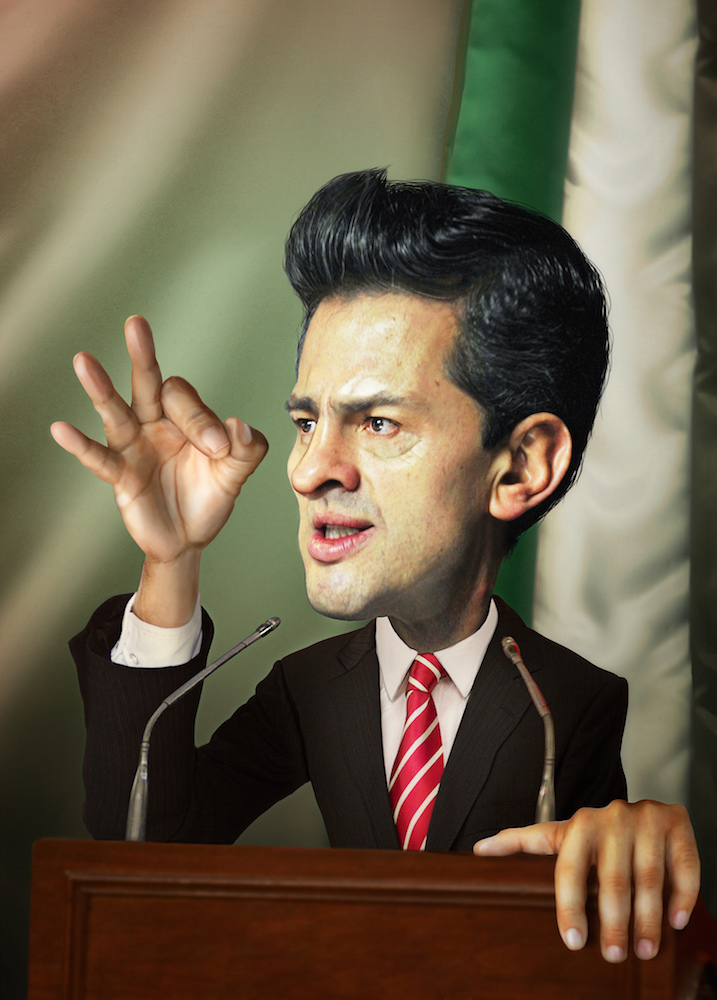 December 1 marked the halfway point in Mexican president Enrique Peña Nieto’s six-year term. His first year in office was by far his best. On day two of his presidency he announced the Pact for Mexico — an alliance of the center-left Party of the Democratic Revolution (PRD), the center-right National Action Party (PAN), and his own Revolutionary Institutional Party (PRI).

Thanks to this tripartite alliance he was able to pass laws and constitutional amendments producing sweeping changes in education, telecommunications, taxation, and energy. The energy reform allowed private capital to be invested in the oil sector for the first time since President Lázaro Cárdenas nationalized the industry in 1938. Although dissident teachers in southern Mexico and followers of two-time PRD presidential candidate Andrés Manuel López Obrador opposed the reforms, with the PRD participating in the Pact for Mexico, opposition was ineffective.

The domestic and foreign press
fawned over Peña Nieto.

The domestic and foreign press fawned over Peña Nieto. Peña Nieto summed up his legislative handiwork, noting, “In 20 months, thanks to the support of diverse political forces of the left, center, and right it was possible to make important transformational reforms which will provide a new basis — a platform to promote development, welfare and prosperity in Mexico.”

Mexicans, having seen a stagnant economy and little improvement in terms of security, only gave Peña Nieto a 44% approval rating after his first year.

The year 2014, in contrast to 2013, became Peña Nieto’s annus horribilis. His presidency started downhill in June when the government reported the army had killed 22 young people in Tlatlaya, 50 miles southwest of Mexico City. According to official sources, this was the result of the army confronting delinquents. Later the press revealed that the army had murdered the 22 execution-style in a warehouse.

Then in September police in Iguala, Guerrero, turned their guns on students from the teacher training institute in Ayotzinapa, Guerrero. Six, including three non-students caught in the fusillade, died. Forty-three other students simply disappeared. The government claimed local police had turned the students over to a drug gang which, believing them to be members of a rival gang, killed them and burned their bodies in a dump.

The disappearance of the 43 students
undermined government credibility.

The disappearance of the 43 students quickly undermined government credibility. Both state and federal government responses were viewed as ineffectual and late. In the search for the students, numerous clandestine graves of others were located, indicating the level of violence in Guerrero. It soon came to light that the municipal government of Iguala had close ties to drug traffickers.

While the administration was attempting to sweep the issue of the 43 missing students under the table, news sources revealed that Peña Nieto and his wife owned a $7 million Mexico City mansion built for them by a construction firm which had profited handsomely from government contracts. The murky financing of the mansion confirmed public perception of rampant corruption in government and sunk Peña Nieto’s reputation. By December of last year his approval rating was only 39%.

Except for the escape of drug kingpin Joaquín “El Chapo” Guzmán, 2015 did not provide major new embarrassments for Peña Nieto. However events of the previous year continued to haunt him. In January the attorney general’s office declared its version of the disappearance of the 43 was the “historic truth.”

Few accepted this notion, including investigators from the Inter-American Commission on Human Rights. Based on satellite imagery, they reported that the pyre which had supposedly consumed the students’ remains never existed. Their report sharply criticized what it characterized as a shoddy government investigation.

The report criticized what it characterized as a shoddy government investigation.

This report as well as a series of demonstrations demanding justice and a cottage industry publishing books on the 43 kept the issue in the news. The issue dogged not only Peña Nieto but the PRD, since both the mayor of Iguala and the governor of Guerrero at the time of the students’ disappearance were elected on the PRD ticket.

Given the lack of major new revelations, in December of this year Peña Nieto’s approval rating remained at 39%. This is substantially below the mid-term ratings of his two predecessors, Vicente Fox (2000-2006) at 58%, and Felipe Calderón (2006-2012) at 52%. The terms of both of his predecessors are now considered mediocre.

Peña Nieto’s low ratings reflect not only his performance but also the inability of his government to address basic problems facing Mexico. These problems have persisted and in some cases worsened during his administration.

Under Peña Nieto the economy has continued to sputter. Between 2000 and 2014, annual GDP growth averaged 2.03% — virtually the same rate as population growth. During the first three years of the Peña Nieto administration, growth averaged 1.9%. This growth rate has been especially galling since on the campaign trail Peña Nieto promised 5-6% economic growth. Low oil prices have dragged down an already sluggish economy. Not surprisingly in a November poll only 23% approved of Peña Nieto’s handling of the economy, while 56% disapproved.

Dissatisfaction with the economy notwithstanding, a few bright spots emerged.

The star of the export sector is the auto industry, which has attracted massive foreign investment due to low wages (by international standards), proximity to the U.S. market, and Mexico’s trade agreements giving it tariff-free access to European and Japanese markets. Auto production rose 8.1% in first half of 2015, compared to same period last year.

Mexico’s wealth has become increasingly concentrated. In 2002 the four richest Mexicans held wealth equal to 2 percent of gross domestic product (GDP). By 2014, their wealth totaled 9% of GDP. The number of low wage jobs has been increasing while the number of high wage jobs has decreased. Government figures reported an increase of two million in the number of people living in poverty between 2012 and 2014. The Organization for Cooperation and Economic Development, a grouping of the 34 largest economies of the world, finds that of its members, only Chile has wealth distribution which is more unequal than Mexico’s. A November poll found that 61% of Mexicans disapproved of Peña Nieto’s efforts at combating poverty.

‘Insecurity and violence continue to be rampant in many parts of Mexico.’

According to government sources, between December 2012, the month Peña Nieto took office, and September of 2014, 31,892 Mexicans were murdered. From December 2012 through October 2014, 9,442 Mexicans disappeared. As columnist Gerardo Esquivel noted this month, “Insecurity and violence continue to be rampant in many parts of Mexico.” Most Mexicans concur, giving Peña Nieto a 24% approval rating vs. a 57% disapproval rating in his handling of security.

Corruption continues to drag down the reputation of incumbents and deter foreign investors. In 2009, Mexico ranked 89th of the nations evaluated by Transparency International for its level of corruption. By 2015 it had slipped to 103rd. Political parties, considered corrupt by 91% of the population, are viewed as the most corrupt institution.

Demonstrators frequently vent their wrath on political institutions. As a result, crowd-control barriers outside the Chamber of Deputies are now more formidable than those outside the U.S. embassy — the protest venue of choice in the late 20th century. A December poll found that 42% of Mexicans felt that the level of corruption worsened in the past year, while another 45% felt it remained unchanged.

Another factor is the appalling situation of human rights in Mexico.

Another factor dragging down Peña Nieto’s approval ratings is the appalling situation of human rights in Mexico. Human Rights Watch’s 2015 report noted, “The government has made little progress in prosecuting widespread killings, enforced disappearances, and torture committed by soldiers and police in the course of efforts to combat organized crime….” A November poll found that 54% of Mexicans felt that respect for human rights remained at the same level, while 26% felt it had declined.

A 2015 poll known as Latinobarómeter found only 19% of Mexicans are satisfied with the functioning of democracy. However, barring new outrages, a mass movement such as the one which drove Guatemalan President Otto Pérez Molina from office earlier this year, is unlikely. That leaves elections as the route to change.

The 2015 mid-term congressional elections did show positive signs. At 48% mid-term participation was the highest since the 1997. Congressional seats changed from one party to another in 102 of the 300 congressional districts — a percentage well above that of Mexico’s northern neighbor.

Many voters shifted their alliance to
a new left party.

Voters showed their disdain for the three major parties participating in the Pact for Mexico, reducing their vote share from 75.9% in 2012 to 63.6%. Many voters shifted their alliance to a new left party, MORENA (Movement for National Renovation), organized to propel two-time presidential candidate Andrés Manuel López Obrador to the presidency in 2018. His party obtained 8.4% of the vote nationwide and outpolled the PRD in its traditional Mexico City bastion 700,000 to 590,000. This showing is a mixed blessing for the left, since if its vote remains divided between MORENA and the PRD, it has no chance in Mexico’s one-round presidential elections.

Once the 2015 elections were over, political attention immediately turned to the 2018 presidential elections. Polls on candidates this far out mean little, since recent experience in Mexico indicates that the lead will change as a result of campaigning. Lead changes reflect not only candidates’ qualities, but the sympathy of TV networks and huge amounts of cash — some legal and some otherwise — which swirl around elections.

For what it is worth, a poll from December of this year indicated that if elections were held today, 29% would vote for the incumbent PRI, 25 percent for the PAN (voted out of office in 2012), 14 percent for newly founded MORENA, 9 percent for an independent candidate (independents will be allowed on the presidential ballot for first time in 2018), and 7 percent for the splintered PRD.

When asked which candidate voters favored, PRI Interior Minister Miguel Ángel Osorio Chong (who could get a boost if El Chapo is nabbed before the election) and López Obrador (who’s been running non-stop for president since 2006) polled at 18%. A close rival is former first lady Margarita Zavala of the PAN at 17%. She’s often compared to Hillary, but unlike the former U.S. first lady, she’s never been a candidate for public office, making it hard to discern her positions. Others drawing significant support were Jaime “El Bronco” Rodríguez (independent governor of Nuevo León) at 15% and Mexico City Mayor Miguel Ángel Mancera of the PRD at 8%.