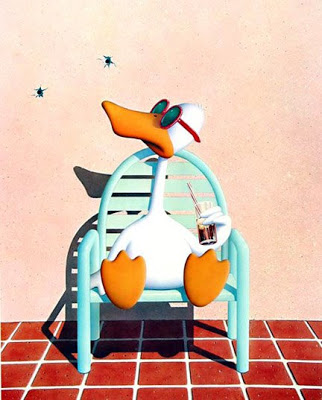 ‘With barely 60 days to go until Bush hands over to Barack Obama, his White House is working methodically to weaken or reverse an array of regulations that protect America’s wilderness.’
By Suzanne Goldenberg / November 20, 2008

George Bush is working at a breakneck pace to dismantle at least 10 major environmental safeguards protecting America’s wildlife, national parks and rivers before he leaves office in January.

With barely 60 days to go until Bush hands over to Barack Obama, his White House is working methodically to weaken or reverse an array of regulations that protect America’s wilderness from logging or mining operations, and compel factory farms to clean up dangerous waste.

In the latest such move this week, Bush opened up some 800,000 hectares (2m acres) of land in Rocky Mountain states for the development of oil shale, one of the dirtiest fuels on the planet. The law goes into effect on January 17, three days before Obama takes office.

The timing is crucial. Most regulations take effect 60 days after publication, and Bush wants the new rules in place before he leaves the White House on January 20. That will make it more difficult for Obama to undo them.

“There are probably going to be scores of rules that are issued between now and January 20,” said John Walke, a senior attorney at the National Resources Defence Council. “And there are at least a dozen very controversial rules that will weaken public health and environment protection that have no business being adopted and would not be acceptable to the incoming Obama administration, based on stances he has taken as a senator and during the campaign.”

The flurry of new rules – known as midnight regulations – is part of a broader campaign by the Bush administration to leave a lasting imprint on environmental policy. Some of the actions have provoked widespread protests such as the Bureau of Land Management’s plans to auction off 20,000 hectares of oil and gas parcels within sight of Utah’s Delicate Arch natural bridge.

The Bush administration is also accused of engaging in a parallel go-slow on court-ordered actions on the environment. “There are the midnight regulations that they are trying to force out before they leave office, and then there are the other things they are trying not to do before they go. A lot of the climate stuff falls into the category of things they would rather not do,” said a career official at the Environmental Protection Agency.

Other presidents have worked up to the final moments of their presidency to impose their legacy on history. But Bush has been particularly organised in his campaign to roll back years of protections – not only on the environment, but workplace safety and employee rights.

“This is Bush trying to leave a legacy that supports his ideology,” said Gary Bass, executive director of OMB Watch, an independent Washington thinktank that monitors the White House office of management and budget. “This was very strategic and it was in line of the ideology of the Bush administration which has been to put in place a free market and conservative agenda.”

The campaign got under way in May when the White House chief of staff, Joshua Bolten, wrote to government agencies asking them to forward proposals for rule changes. Bolten had initially set a November 1 deadline on rule-making. The White House denies that the flurry of rule changes is politically motivated. “What the chief of staff wanted to avoid was this very charge that we would be trying to, in the dark of night in the last days of the administration, be rushing regulations into place ahead of the incoming, next administration,” Tony Fratto, the White House spokesman, told reporters.

But OMB Watch notes that the office of management and budget website shows 83 rules reviewed from September 1 to October 31 this year – about double its workload in 2007, 2006 and 2005.

Meanwhile, the Bush administration cut short the timeframe for public comment. In one instance, officials claimed to have reviewed 300,000 comments about changes to wildlife protection within the space of a week.

The new regulations include a provision that would free industrial-scale pig and cattle farms from complying with the Clean Water Act so long as they declare they are not dumping animal waste in lakes and rivers. The rule was finalised on October 31. Mountain-top mining operations will also be exempt from the Clean Water Act, allowing them to dump debris in rivers and lakes. The rule is still under review at the OMB. Coal-fired power plants will no longer be required to install pollution controls or clean up soot and smog pollution.

Yet another of the new rules, which has generated publicity, would allow the Pentagon and other government agencies to embark on new projects without first undertaking studies on the potential dangers to wildlife.

Announcements of further rule changes are expected in the next few days including one that would weaken regulation of perchlorate, a toxin in rocket fuel that can affect brain development in children, in drinking water.

The Bush strategy has prompted a fightback from environmentalists, the Democratic-controlled Congress, and members of the Obama transition team.

John Podesta, who is overseeing the transition, has said that Obama will review the last-minute actions, and will seek to repeal those that are “not in the interests of the country”.

The last-minute rules passed during the “midnight hours” of the George Bush presidency differ from his predecessors because they are basically a project of deregulation – not regulation. Among the most far-reaching:

• The interior department can approve development such as mining or logging without consulting wildlife managers about their impact.

• Restrictions will be eased so power plants can operate near national parks and wilderness areas.

• Pollution controls on new power plants will be downgraded.

• Mountain-top mine operators could dump waste into rivers and streams.

• 2m acres of land in Utah, Wyoming and Colorado opened to development of oil shales, the dirtiest fuel on Earth.