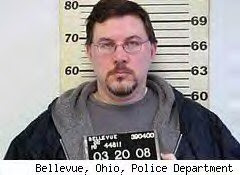 No Picnic: Man Charged with Screwing a Patio Table

Police in Ohio say that a married father of three has confessed to repeatedly having sex with his patio picnic table.

Art Price, Jr., 40, has been charged with four counts of public indecency after a neighbor videotaped him getting all nasty with the umbrella hole in the middle of his plastic picnic table. Apparently preferring the table’s legs in the air, Price reportedly flipped the table over before forcing himself inside of it.

Price admitted that his skeevy antics took place both inside and outside of his home, and police say he did his table humping in broad daylight, not far from a school.

In addition to public outrage, we imagine there’s considerable jealousy among Price’s other lawn furniture. While barbecues and lawn chairs don’t have many places for good loving (unless you’re big enough for that drink holder), we’re sure that plastic gnome hiding in the hedges is wondering why he wasn’t chosen. The garden hose, however, is probably pretty relieved.

UPDATE: Authorities have dropped the indecency charges against Price, after deciding the evidence didn’t support the case for a felony. (Maybe somebody got to the picnic table and it refused to testify.) Prosecutors say, however, that they may revisit the case later.

This entry was posted in RagBlog and tagged Criminal Justice, Humor, Sexuality. Bookmark the permalink.