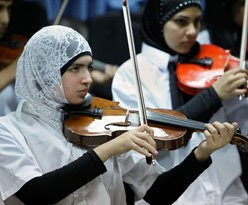 The Palestinian youths from a tough West Bank refugee camp stood facing the elderly Holocaust survivors on Wednesday, appearing somewhat defiant in a teenage sort of way. Then they began to sing.

The choir burst into songs for peace, bringing surprised smiles from the audience. But the event had another twist: Most of the Holocaust survivors did not know the youths were Palestinians from the West Bank, a rare sight in Israel these days. And the youths had no idea they were performing for people who lived through Nazi genocide – or even what the Holocaust was.

“I feel sympathy for them,” said Ali Zeid, an 18-year-old keyboard player, who added that he was shocked by what he learned about the Holocaust, in which the Nazis killed 6 million Jews in their campaign to wipe out European Jewry.

“Only people who have been through suffering understand each other,” said Zeid, who said his grandparents were Palestinian refugees forced to flee the northern city of Haifa during the war that followed Israel’s creation in 1948.

The 13 musicians, aged 11 to 18, belong to Strings of Freedom, a modest orchestra from the Jenin refugee camp in the northern West Bank, the scene of a deadly 2002 battle between Palestinian militants and Israeli soldiers.

The event, held at the Holocaust Survivors Center in this tree-lined central Israeli town, was part of Good Deeds Day, an annual event run by an organization connected to billionaire Shari Arison, Israel’s richest woman.

Most of the Palestinian youths had not seen an Israeli civilian before – only gun-toting soldiers in military uniforms manning checkpoints, conducting arrest raids of wanted Palestinians or during army operations.

“They don’t look like us,” said Ahed Salameh, 12, who wore a black head scarf woven with silver.

Most of the elderly Israelis wore pants and T-shirts, with women sporting a smear of lipstick.

“Old people look different where we come from,” Salameh said.

She said she was shocked to hear about the Nazi genocide against Jews. Ignorance and even denial of the Holocaust is widespread in Palestinian society.

Amnon Beeri of the Abraham Fund, which supports coexistence between Jews and Arabs, said most of the region’s residents have no real idea about the other.

The youths said their feisty conductor, Wafa Younis, 50, tried to explain to them who the elderly people were, but chaos on the bus prevented them from listening.

The elderly audience said they assumed Arab children were from a nearby village – not from the refugee camp where 23 Israeli soldiers were killed, alongside 53 Palestinian militants and civilians, in several days of battle in April 2002.

Some 30 elderly survivors gathered in the center’s hall as teenage boys and girls filed in 30 minutes late – delayed at an Israeli military checkpoint outside their town, they later explained.

Some of the young women wore Muslim head scarves – but also sunglasses and school ties.

As a host announced in Hebrew that the youths were from the Jenin refugee camp, there were gasps and muttering from the crowd. “Jenin?” one woman asked in jaw-dropped surprise.

Younis, from the Arab village of Ara in Israel, then explained in fluent Hebrew that the youths would sing for peace, prompting the audience to burst into applause.

The encounter began with an Arabic song, “We sing for peace,” and was followed by two musical pieces with violins and Arabic drums, as well as an impromptu song in Hebrew by two in the audience.

Glickman, whose family moved to the newly created Jewish state in 1949 after fleeing to Siberia to escape the Nazis, said she had no illusions the encounter would make the children understand the Holocaust. But she said it might make a small difference.

“They think we are strangers, because we came from abroad,” Glickman said. “I agree: It’s their land, also. But there was no other option for us after the Holocaust.”

Later, she tapped her feet in tune as the teenagers played a catchy Mideast drum beat. After the event, some of the elderly Israelis chatted with students and took pictures together.

The encounter was not absent of politics. Younis dedicated a song to an Israeli soldier held captive by Palestinian militants in the Gaza Strip – and also criticized Israel’s occupation of the West Bank.

But she said the main mission of the orchestra, formed seven years ago to help Palestinian children overcome war trauma, was to bring people together.

This entry was posted in RagBlog and tagged Israel, Music, Palestine, Peace Movement. Bookmark the permalink.