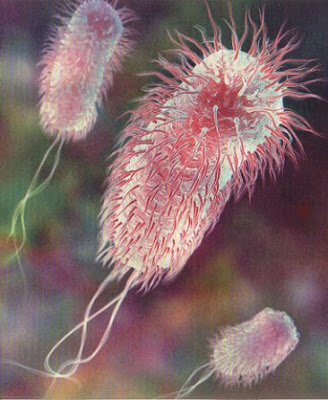 Stephanie Smith was pretty much committed to vegetarianism. But after her mother insisted she get a little protein from a traditional meal, she broke down and let her mother (Sharon) cook her a burger. Sharon slapped a Sam’s Club beef patty in the frying pan and they had their American style meal.

When Stephanie got sick, her mother was sure she knew what had caused it. It had to be the spinach. What neither of them knew was that the meat industry poisons people all the time. That’s why it rarely makes the news. Stephanie went into seizures and had to be put into a coma to save her life. Today she is recovering, but she will probably never walk again.

The story of the burger that poisoned her is a complex one. No, as you probably have already guessed, the cows (as opposed to steers) who supplied the meat for that burger were not raised on a family farm. If the cows had been raised in this traditional manner, they would have been grass fed, allowed to exercise and slaughtered in a clean environment.

As it was the killer burger came from multiple sources. To maximize profits, Cargill purchased cow meat from here and there, high intensity feedlots where cattle are penned in and pumped full of the high protein food (soy) that makes their meat attractive on the plate. After feeding out in these filthy crowded lots, the animals are brought in to be slaughtered in an assembly line process. Although there are safety rules, greed and the sheer impossibility of keeping feces off the future meat products make food safety in this environment extremely difficult to achieve.

No one knows exactly where the E. coli tainted meat came from. Could be Omaha. Could be Uruguay. All the different sources make it easy for the companies to blame each other, while they speed up production and hire illegal immigrants at lower wages. The American Meat Institute says it is doing what it can to slow down the rate of E. coli poisoning.

Cook your burger all the way through and you will kill the pathogens, diseased tissue and possibly some of the hormones and antibiotics. Then you will have a wholesome American style meal. Medium rare could quite possibly kill you. Meat promoters point to the need for total irradiation of meat products. Just another part of a mouth watering American food experience, I guess, but obviously another workplace hazard for the largely immigrant workforce.

Are there other options? Aside from the obvious vegetarian diet that feeds the world 15X over compared to meat eating? The vegetable diet that is better for your health? The diet that does more to stop global warming than driving an electric car, riding a bicycle and recycling 100% of your trash? The diet that allows humanity to live at peace with animals and each other? Not that diet?

Okay, the other alternative is to go to your butcher and have him (or her) cut and grind up a piece of animal flesh for you to eat. It won’t cost $1 a pound and come in a pre formed patty, but it will put you in a safer and more morally honest position as a meat eater.

6 Responses to Stephanie Smith : E. Coli and the Killer Burger