Wars: Not Glorious, Ever 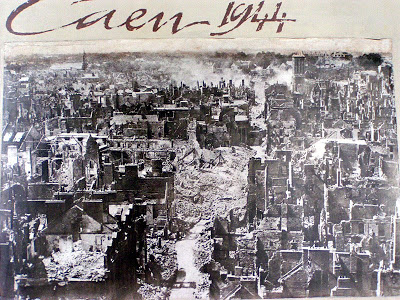 A revisionist theme seems to have settled on this year’s 65th anniversary commemoration of the Normandy landings.

The tone was set in Antony’s Beevor’s new book, D-Day, which tries to debunk certain received ideas about the Allied campaign.

And far from being universally welcomed as liberators, many troops had a distinctly surly reception from the people of Normandy.

The reason for this was simple. Many Normandy towns and villages had been literally obliterated by Allied bombing.

The bombardment of Caen, Mr Beevor said, could almost be considered a war-crime (though he later retracted the comment).

Many historians will retort that there is nothing new in Mr Beevor’s account.

After all, the scale of destruction is already well-established.

Some 20,000 French civilians were killed in the two-and-a-half months from D-Day, 3,000 of them during the actual landings.

In some areas – like the Falaise pocket where the Germans were pounded into oblivion at the end of the campaign – barely a building was left standing and soldiers had to walk over banks of human corpses.

As for the destruction of Caen, it has long been admitted that it was militarily useless.

The Germans were stationed to the north of the city and were more or less untouched.

Twenty-five years ago, in his book Overlord, Max Hastings had already described it as “one of the most futile air attacks of the war.”

Though these revisionist accounts were written elsewhere, it is in France that these ideas strike more of a chord today.

It is not as if the devastation wrought by the Allies is not known – it is just that it tends not to get talked about.

And yet for many families who lived through the war, it was the arrival and passage of British and American forces that was by far the most harrowing experience.

“It was profoundly traumatic for the people of Normandy,” said Christophe Prime, a historian at the Peace Memorial in Caen.

“Think of the hundreds of tons of bombs destroying entire cities and wiping out families. But the suffering of civilians was for many years masked by the over-riding image – that of the French welcoming the liberators with open arms.”

According to Prime, it was during the 60th anniversary commemoration five years ago that the taboo first began to lift.

At town meetings across Normandy, witnesses – now on their 70s – spoke of the terrible things they had seen as children.

At the same time an exhibition at the Caen memorial displayed letters from Allied servicemen speaking frankly about their poor reception by locals.

That too was an eye-opener for many Normandy people.

For example, Cpl LF Roker of the Highland Light Infantry is quoted in another new book about the civilian impact of the campaign, Liberation, The Bitter Road to Freedom, by William Hitchcock.

“It was rather a shock to find we were not welcomed ecstatically as liberators by the local people, as we were told we should be… They saw us as bringers of destruction and pain,” Mr Roker wrote in his diary.

Another soldier, Ivor Astley of the 43rd Wessex Infantry, described the locals as “sullen and silent… If we expected a welcome, we certainly failed to find it.”

In his book, Mr Hitchcock raises another issue that rarely features in euphoric folk-memories of liberation: Allied looting, and worse.

“The theft and looting of Normandy households and farmsteads by liberating soldiers began on June 6 and never stopped during the entire summer,” he writes.

One woman – from the town of Colombieres – is quoted as saying that “the enthusiasm for the liberators is diminishing. They are looting… everything, and going into houses everywhere on the pretext of looking for Germans.”

Even more feared, of course, was the crime of rape – and here too the true picture has arguably been expunged from popular memory.

According to American historian J Robert Lilly, there were around 3,500 rapes by American servicemen in France between June 1944 and the end of the war.

“The evidence shows that sexual violence against women in liberated France was common,” writes Mr Hitchcock.

Of 29 soldiers executed for rape by the US military authorities, 25 were black – though African-Americans did not represent nearly so high a proportion of convictions.

So why did the “bad” side of the Allied liberation tend to disappear from French popular consciousness?

The answer of course is that the overwhelming result of the Allied campaign was a positive one for the whole of France.

It was hard for the people of Normandy to spoil the national party by complaining of their lot.

The message from on-high was sympathetic but clear: we know you have suffered, but the price was worth it. Most people agreed and were silent.

In addition, open criticism of British and American bombings raids had long been a hallmark of French collaboration.

In Paris – which, it is often forgotten, was itself bombed by the British – pro-German groups staged ceremonies to commemorate the victims, and the “crimes” of the Allies were excoriated in the press.

After the war, abusing the Allies would have seemed like siding with the defeated and the dishonoured.

Of course, in some communities the devastation was never forgotten.

There are villages in Normandy where until recently the 6 June celebrations were deliberately shunned, because the associations were too painful.

And on the ideological front, there have been intellectuals of both left and right who justified their anti-Americanism by recalling the grimmer aspects of the French campaign – like the “cowardly” way the Americans bombed from high altitude, or their reliance on heavy armour causing indiscriminate civilian casualties.

But in general, France has gone along with the accepted version of the landings and their aftermath – that of a joyful liberation for which the country is eternally grateful.

That version is the correct one. France was indeed freed from tyranny, and the French were both happy and thankful.

But it is still worth remembering that it all came at a cost.

This entry was posted in RagBlog and tagged France, World War II. Bookmark the permalink.

8 Responses to Wars: Not Glorious, Ever