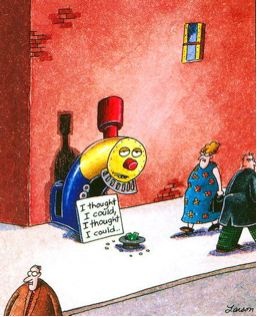 Greed: The Little Engine that Couldn’t
By Barbara Ehrenreich / September 24, 2008

Greed – and its crafty sibling, speculation – are the designated culprits for the ongoing financial crisis, but another, much admired, habit of mind should get its share of the blame: the delusional optimism of mainstream, all-American, positive thinking. As promoted by Oprah, scores of megachurch pastors, and an endless flow of self-help bestsellers, the idea is to firmly belief that you will get what you want, not only because it will make you feel better to do so, but because thinking things, “visualizing” them – ardently and with concentration – actually makes them happen. You will be able to pay that adjustable rate mortgage or, at the other end of the transaction, turn thousands of bad mortgages into giga-profits, the reasoning goes, if only you truly believe that you can.

Positive thinking is endemic to American culture – from weight loss programs to cancer support groups – and in the last two decades it put down deep roots in the corporate world as well. Everyone knows that you won’t get a job paying more than $15 an hour unless you’re a “positive person” — doubt-free, uncritical, and smiling—and no one becomes a CEO by issuing warnings of possible disaster. According to a rare skeptic, a Washington-based crisis management consultant I interviewed on the eve of the credit meltdown in 2007, even the magical idea that you can have whatever you truly want has been “viral” in the business culture. All the tomes in airport bookstores’ business sections scream out against “negativity” and advise the reader to be at all times upbeat, optimistic and brimming with confidence—a message companies relentlessly reinforced by treating their white collar employees to manic motivational speakers and revival-like motivational events. The top guys, meanwhile, would go off to get pumped up in exotic locales with the likes of success guru Tony Robbins. Those who still failed to get with the program could be subjected to personal “coaching” or of course, shown to the door.

The same frothy wave of mandatory optimism swept through the once-sober finance industry. On their websites, scores of motivational speakers proudly list companies like Lehman Brothers and Merrill Lynch among their clients. Angelo Mozilo, the former CEO of Countrywide Mortgage whose subprime ventures precipitated the entire crisis, was known for his congenital optimism and described in the Guardian earlier this year as “absurdly upbeat” even as his industry unraveled. No one was psychologically prepared for hard times, when they hit, because, according to the tenets of positive thinking, even to think of trouble is to bring it on. In May, the New York Times reported that Merrill, caught up short, was suddenly trying to “temper the Pollyannas in its ranks,” and force its analysts to occasionally say the word “sell.”

For those at the very top of the corporate hierarchy, all this positive thinking must not have seemed delusional at all. They actually could have almost anything they wanted, just by expressing the desire. CEO compensation has ballooned in recent years, creating the new class of billionaires and centi-millionaires who inhabit Lear jets and four-figure a night hotel rooms, who can dispatch a private plane who pick up a favorite wine, or a pet, they happen to have left in the Hamptons. According to a new book from the UK, Unjust Rewards by Polly Toynbee and David Walker, these masters of the universe tend to be seriously uninformed about how the other 99 percent lives and, Toynbee told me, often uncomprehending of the financial operations – the derivatives, CDS’s, etc. – that their wealth is derived from. If you live in a bubble of perfect wish-fulfillment, how could you imagine that, for example, some poor fellow in Cleveland might run up against unexpected medical bills or car problems that could waylay his mortgage payments?

Americans did not start out as deluded optimists. The original ethos, at least of white Protestant settlers and their descendents, was a grim Calvinism that offered wealth only through hard work and savings, and even then made no promises at all. You might work hard and still fail; you certainly wouldn’t get anywhere by adjusting your attitude or dreamily “visualizing” success. Calvinists thought “negatively” as we would say today, carrying a weight of guilt and foreboding that sometimes broke their spirits. It was in response to this harsh ethos that positive thinking arose– among mystics, lay healers, and transcendentalists – in the 19th century, with its crowd-pleasing message that God, or the universe, is really on your side, that you can actually have whatever you want, if the wanting is focused enough.

When it comes to how we think, “negative” is not the only alternative to “positive.” As the case histories of depressives show, consistent pessimism can be just as baseless and deluded as its opposite. The alternative to both is realism – seeing the risks, having the courage to bear bad news, and being prepared for famine as well as plenty. Now, with our savings, our homes and our livelihoods on the line, we ought to give it a try.

[A shorter version of ths article appeared in The New York Times, September 24, 2008.]

1 Response to Barbara Ehrenreich : How Positive Thinking Wrecked the Economy