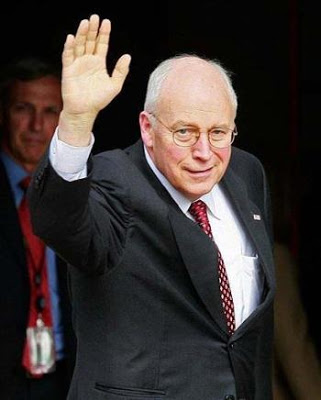 If I said what I’d like to say on reading this (and hearing it all day), the NSA agents who are monitoring this board would be sending the Secret Service to knock on my door.

The vice president says that the use of waterboarding was appropriate and that the prison at Guantanamo Bay, Cuba, should stay open until ‘the end of the war on terror.’
By Greg Miller / December 16, 2008

See Video of ABC’s interview with Dick Cheney, Below.

WASHINGTON — Vice President Dick Cheney said Monday that he was directly involved in approving severe interrogation methods used by the CIA, and that the prison at Guantanamo Bay, Cuba, should remain open indefinitely.

Cheney’s remarks on Guantanamo appear to put him at odds with President Bush, who has expressed a desire to close the prison, although the decision is expected to be left to the incoming administration of President-elect Barack Obama.

Cheney’s comments also mark the first time that he has acknowledged playing a central role in clearing the CIA’s use of an array of controversial interrogation tactics, including a simulated drowning method known as waterboarding.

“I was aware of the program, certainly, and involved in helping get the process cleared,” Cheney said in an interview with ABC News.

Asked whether he still believes it was appropriate to use the waterboarding method on terrorism suspects, Cheney said: “I do.”

His comments come on the heels of disclosures by a Senate committee showing that high-level officials in the Bush administration were intimately involved in reviewing and approving interrogation methods that have since been explicitly outlawed and that have been condemned internationally as torture.

Soon after the Sept. 11 attacks, Cheney said, the CIA “in effect came in and wanted to know what they could and couldn’t do. And they talked to me, as well as others, to explain what they wanted to do. And I supported it.”

Waterboarding involves strapping a prisoner to a tilted surface, covering his face with a towel and dousing it to simulate the sensation of drowning.

CIA Director Michael V. Hayden has said that the agency used the technique on three Al Qaeda suspects in 2002 and 2003. But the practice was discontinued when lawyers from the Department of Justice and other agencies began backing away from their opinions endorsing its legality.

Cheney has long defended the technique. But he has not previously disclosed his role in pushing to give the CIA such authority.

Cheney’s office is regarded as the most hawkish presence in the Bush administration, pushing the White House toward aggressive stances on the invasion of Iraq and the wiretapping of U.S. citizens.

Asked when the Guantanamo Bay prison would be shut down, Cheney said, “I think that that would come with the end of the war on terror.” He went on to say that “nobody can specify” when that might occur, and likened the use of the detention facility to the imprisonment of Germans during World War II.

“We’ve always exercised the right to capture the enemy and hold them till the end of the conflict,” Cheney said.

The administration’s legal case for holding detainees indefinitely has been eroded by a series of court rulings. Obama has pledged to close the facility, which still holds 250 prisoners.

Cheney’s remarks are the latest in a series of interviews granted by Bush and senior officials defending their decisions as they prepare to leave office. Bush recently said his main regret was that U.S. spy agencies had been so mistaken about Iraq’s alleged weapons programs. Cheney and the Bush administration have been accused of “cherry-picking” intelligence to support going to war with Iraq.

Cheney said that those mistakes didn’t matter, and that the U.S. invasion was justified by Iraqi dictator Saddam Hussein’s ability to reestablish destructive weapons programs. The vice president brushed off a series of findings questioning that view, including a 2006 Senate report concluding that Hussein lacked a “coherent effort” to develop nuclear weapons and had only a “limited capability” for chemical weapons.

“This was a bad actor and the country’s better off, the world’s better off, with Saddam gone, and I think we made the right decision in spite of the fact that the original [intelligence] was off in some of its major judgments,” he said.