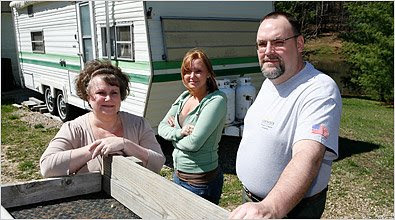 Kim Baker works at a roof tile factory with declining business. “We don’t just hop in the car and go shopping or get something to eat,” he said, with his daughter Bailey and wife, Debbie, right. Photo by J. Kevin Fitzsimons / NYT
Workers Get Fewer Hours, Deepening the Downturn
By Peter S. Goodman / April 18, 2008

Not long ago, overtime was a regular feature at the Ludowici Roof Tile factory in eastern Ohio. Not anymore. With orders scarce and crates of unsold tiles piling up across the yard, the company has slowed production and cut working hours, sowing worry and thrift among its workers.

Kim Baker works at a roof tile factory with declining business. “We don’t just hop in the car and go shopping or get something to eat,” he said, with his daughter Bailey and wife, Debbie, right.

Recessionary Signs “We don’t just hop in the car and go shopping or get something to eat,” said Kim Baker, whose take-home pay at the plant has recently dropped to $450 a week, from more than $600. “You’ve got to watch everything. If we go to town now, it’s for a reason.”

Throughout the country, businesses grappling with declining fortunes are cutting hours for those on their payrolls. Self-employed people are suffering a drop in demand for their services, like music lessons, catering and management consulting. Growing numbers of people are settling for part-time work out of a failure to secure a full-time position.

The gradual erosion of the paycheck has become a stealth force driving the American economic downturn. Most of the attention has focused on the loss of jobs and the risk of layoffs. But the less-noticeable shrinking of hours and pay for millions of workers around the country appears to be a bigger contributor to the decline, which has already spread from housing and finance to other important areas of the economy.

While official unemployment has risen only modestly, to 5.1 percent, the reduction of wages and working hours for those still employed has become a primary cause of distress, pushing many more Americans into a downward spiral, economists say.

Moreover, this slippage is a critical indicator that the nation may well be on the verge of a recession, if not already in one.

Last month, the hours worked by those on American payrolls dropped, compared with six months earlier, according to an index maintained by the Labor Department. The last time the index moved into negative territory was February 2001, when the economy was on the doorstep of recession. A similar slide emerged in August 1990, one month into what proved an even more severe downturn.

From March 2007 to March of this year, the average workweek reported in the private sector slipped slightly to 33.8 hours, from 33.9 hours, while overtime for manufacturing workers fell by a larger margin.

At the end of last month, more than 4.9 million people were working part time either because they could not find full-time jobs or because their companies had cut hours in the face of slack business, according to a Labor Department survey. That represented an increase of 400,000 since November.

And on Wednesday, the government reported that average earnings slipped in March after accounting for the rising costs of food and fuel — the sixth consecutive month that pay failed to keep pace with inflation.

Read all of it here. / New York Times / The Rag Blog