His Overwhelming Grace and Exasperated Wrath

The kids were snoozing so I drove along the back roads skirting the Lackawanna River on a dawn hunt for black coffee and a newspaper.

I think even Norman Rockwell would have found this place too sticky sweet, too postcard: the weathered barns, the fallow fields perfectly snow-frosted; red, white and blue flags already up on the clapboard farmhouses and the white-washed church in the valley already full for Easter prayers.

At a gas station, I scored the paper and coffee, spilled some on the front page – the closest thing I’ve got to a religious ritual – then parked in front of a row of insanely pretty salt-box houses shining like mad teeth on the river bank. 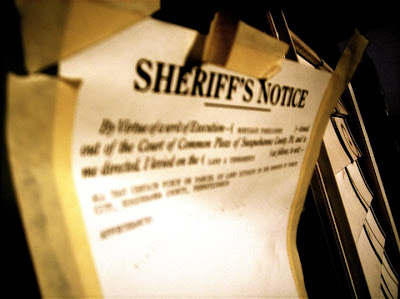 One was missing a pick-up in the driveway; its screen door was left half-open, and there was a letter taped to the window. The Sheriff’s Notice of eviction. Another foreclosure.

I know that’s what Obama’s spiritual guide would say.

But why? It seems likes He’s already done a pretty good job of damning these United States.

And He seems to have really taken it out on this corner of Pennsylvania.

The gargantuan Bethlehem steel works have dwindled to a few robot-operated mills controlled from Mumbai, India. The only remainders of nearby Carbondale’s mining industry are in display cases at the ageing Coal Inn. But you could still get out by selling your home to ski tourists from New York – until this year when mortgage markets turned cancerous. That leaves Forest City’s one industry, lumbering – which we can kiss goodbye since a recent ruling by the NAFTA board which allows the import of cheap Canadian wood.

Some local kid has made the paper having been thrown, helmet first, into the volcano called Iraq. The Scranton Times-Tribune, two pages after the photo of a priest blessing a bowl of who knows what, noted that three soldiers killed in yesterday’s bombing are, “pushing the death toll in the five-year conflict to nearly 4,000” – which is true if you don’t count Iraqi dead. But Someone must be counting them. (From way up in heaven, I wonder if we look like a nation of Christians – or an empire of Romans.)

Phil Ochs, before he killed himself, wrote,

“This is a land full of power and glory,
Beauty that words cannot recall.
But her power shall rest on the strength of her freedom.
Her glory shall rest on us all.”

Whatever. It’s a difficult place to be an atheist, in this America, surfeited as it is on every vista with signs of His overwhelming grace and His exasperated wrath. It’s as if the Lord Himself is just as confused and frustrated and disappointed as the rest of us by blessings so abused.

There’s one consolation. He has apparently granted Pennsylvanians the privilege, come April 22, of choosing which Democrat will lose in November.

Which may not mean much to Sandy Ryder on whom the spirit of Easter has landed like a ton of bricks. Sandy, says the flyer tacked up at the Bingham diner, was, “Recently diagnosed with Inflammatory Breast Cancer.” She’s a, “Single mother of two – Tony and Brandon – and Grandmother of one – Jason.” 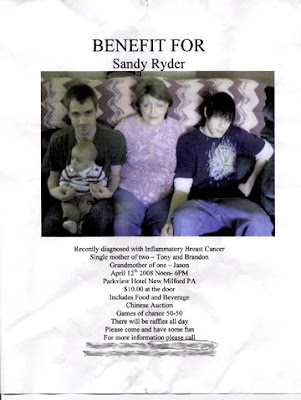 And there they were in a photocopied portrait, the earnest elder son and little Jason to her right, the young slacker (Tony? Brandon?) slouched to her left. The town’s hawking a benefit for Sandy, $10 at the door, “including Food and Beverage” and a “Chinese auction.”

(I’ll bet Al Qaeda could pick up some recruits here – if Osama would offer health insurance.)

Whatever. This is, after all, Holy Week, which marks the anniversary of the grounding of the Exxon Valdez, the day the giant oil corporation soaked 1,200 miles of Alaska’s coast with crude sludge. March 24 marks 19 years since the grounding and 19 years since Exxon’s promise to compensate the ruined fishermen. You should watch the 19-year-old video-tape of Exxon’s man in Alaska. I especially like the part where he tells the fishermen, “You have had some good luck – and you don’t realize it.”

I know some of the fishermen on the TV footage, like the Anderson family, Eyak Natives. I can tell you, the Eyak don’t feel so lucky, still waiting for the Supreme Court to act on Exxon’s latest stall on payment. They’ve seen plenty of Sheriff’s Notices these past 19 years.

George Bush tells us he’s, “feeling just fine.” And we should be glad for him, I suppose.

Maybe you can tell us, Mr. President: Why hasn’t He?

Greg Palast is the author of the NY Times best-selling books Armed Madhouse and Best Democracy Money Can Buy.

This entry was posted in RagBlog and tagged Bush, Economy. Bookmark the permalink.