How Cindy Sheehan is Putting Impeachment on the Table 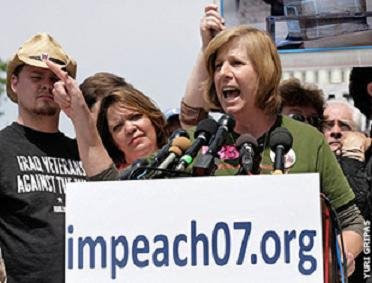 Does anyone seriously doubt that one of the reasons why a House Judiciary Committee hearing will at least discuss the “I” word on Friday is Cindy Sheehan’s independent challenge House Speaker Nancy Pelosi?

Pelosi, famously, took impeachment “off the table” just before the 2006 election.

Then, this summer, she edged it back on the menu – suggesting that the Judiciary Committee might take up the matter of Ohio Congressman Dennis Kucinich’s proposal to impeach the president for using deception to draw the nation into an illegal and immoral war.

Judiciary Committee chair John Conyers, the Michigan Democrat who has never made any secret of his desire to address the imperial reach of the Bush-Cheney presidency – especially on matters of war and peace – jumped at the chance to schedule the hearing. A two-hour session, at which the “i” word will be discussed openly by advocates such as Ohio Congressman Dennis Kucinich, is scheduled for Friday.

Though the hearing is unlikely to evolve into the full-fledged inquiry that many of us believe necessary, it is remarkable that in the summer of a presidential election year the key committee in a chamber where impeachment was supposed to be off the table will turn its attention to the tool that the founders afforded the legislative branch for constraining the executive.

Why is this happening now?

It is worth noting that this is petition-gathering season for independent candidates running in California. Sheehan, the mother of a slain Iraq War soldier who turned her grief into activism, and her supporters are busy collecting the 10,198 signatures that will be needed to get her name on the ballot.

And Sheehan has made impeachment a central issue of her campaign in a city that voted overwhelmingly to support holding Bush and Cheney to account.

Indeed, Sheehan announced that she would challenge the speaker after it became clear – after President Bush commuted White House aide Scooter Libby’s prison sentence last summer — that Pelosi was blocking consideration of impeachment by the House.

Local media has focused on Sheehan’s advocacy for impeachment, noting this spring when she filed initial paperwork for her candidacy that the woman who has been referred to as “the Rose Parks of the anti-war movement” had decided to run because “seeing George Bush impeached would be a victory for humanity.”

Sheehan is a realist. She admits that her candidacy is “an uphill battle.”

But she has drawn significant television, radio and newspaper coverage in San Francisco, as well as endorsements from the local Green and Peace and Freedom parties and local officials such as the president of the city’s school board and plan commission. She has raised more than $100,000 for the campaign, attracted an energetic team of volunteers. And, now, as those volunteers hit the streets to collect the signatures to put Sheehan’s name on the ballot, Pelosi is suddenly showing some flexibility – the key word being “some” – with regard to the impeachment discussion.

No matter how many votes she gets in November, give Cindy Sheehan credit for opening up the debate – not just in San Francisco but in Washington.