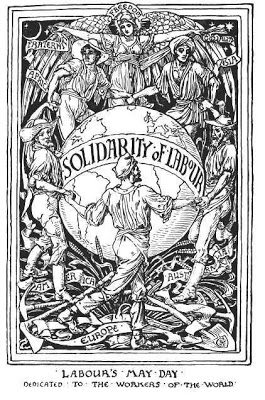 The following comes to us from U.S. Labor Against the War. It includes two May Day communications from the working people of Iraq to the workers and people of the world.

The first is a statement of solidarity from the General Union of Port Workers in Iraq to the members of the International Longshore and Warehouse Union (ILWU) in support of the decision by ILWU members to shut down all the ports on the West Coast as a demonstration of their opposition to the war and occupation of Iraq.

To show their solidarity, members of the Port Workers Union of Iraq have announced plans to shut down the ports of Umm Qasr and Khor Alzubair for one hour today, May Day, in solidarity with the shutdown of all West Coast ports by members of ILWU in opposition to the occupation of Iraq

From: The General Union of Port Workers in Iraq
To: The International Longshore and Warehouse Union in the United States

Dear Brothers and Sisters of ILWU in California:

The courageous decision you made to carry out a strike on May Day to protest against the war and occupation of Iraq advances our struggle against occupation to bring a better future for us and for the rest of the world as well.

We are certain that a better world will only be created by the workers and what you are doing is an example and proof of what we say. The labor movement is the only element in the society that is able to change the political equations for the benefit of mankind. We in Iraq are looking up to you and support you until the victory over the US administration’s barbarism is achieved.

Over the past five years the sectarian gangs who are the product of the occupation, have been trying to transfer their conflicts into our ranks. Targeting workers, including their residential and shopping areas, indiscriminately using all sorts of explosive devices, mortar shells, and random shooting, were part of a bigger scheme that was aiming to tear up the society but they miserably failed to achieve their hellish goal. We are struggling today to defeat both the occupation and sectarian militias’ agenda.

The pro-occupation government has been attempting to intervene into the workers affairs by imposing a single government-certified labor union. Furthermore it has been promoting privatization and an oil and gas law to use the occupation against the interests of the workers.

We the port workers view that our interests are inseparable from the interests of workers in Iraq and the world; therefore we are determined to continue our struggle to improve the living conditions of the workers and overpower all plots of the occupation, its economic and political projects.

Let us hold hands for the victory of our struggle.

The second message is a May Day greeting from a broad cross-section of union leaders from many different unions and labor federations in Iraq as an expression of their appreciation for the solidarity demonstrated by organized labor, working people and all peace-loving people of the world in support of their efforts to end the foreign occupation of Iraq and the sectarian violence that occupation has spawned.

May Day 2008 Statement from the Iraqi labour movement to the workers and all peace loving people of the world.

On this day of international labour solidarity we call on our fellow trade unionists and all those worldwide who have stood against war and occupation to increase support for our struggle for freedom from occupation – both the military and economic.

We call upon the governments, corporations and institutions behind the ongoing occupation of Iraq to respond to our demands for real democracy, true sovereignty and self-determination free of all foreign interference.

Five years of invasion, war and occupation have brought nothing but death, destruction, misery and suffering to our people. In the name of our “liberation,” the invaders have destroyed our nation’s infrastructure, bombed our neighbourhoods, broken into our homes, traumatized our children, assaulted and arrested many of our family members and neighbours, permitted the looting of our national treasures, and turned nearly twenty percent of our people into refugees.

The invaders helped to foment and then exploit sectarian divisions and terror attacks where there had been none. Our union offices have been raided. Union property has been seized and destroyed. Our bank accounts have been frozen. Our leaders have been beaten, arrested, abducted and assassinated. Our rights as workers have been routinely violated.

The Ba’athist legislation of 1987, which banned trade unions in the public sector and public enterprises (80% of all workers), is still in effect, enforced by Paul Bremer’s post-invasion Occupation Authority and then by all subsequent Iraqi administrations. This is an attack on our rights and basic precepts of a democratic society, and is a grim reminder of the shadow of dictatorship still stalking our country.

Despite the horrific conditions in our country, we continue to organise and protest against the occupation, against workplaces abuses, and for better treatment and safer conditions.

Despite the sectarian plots around us, we believe in unity and solidarity and a common aim of public service, equality, and freedom to organise without external intrusions and coercion.

Our legitimacy comes from our members. Our principles of organisation are based on transparent and internationally recognised International Labour Organisation standards.

We call upon our allies and all the world’s peace-loving peoples to help us to end the nightmare of occupation and restore our sovereignty and national independence so that we can chart our own course to the future.

1) We demand an immediate withdrawal of all foreign troops from our country, and utterly reject the agreement being negotiated with the USA for long-term bases and a military presence. The continued occupation fuels the violence in Iraq rather than alleviating it. Iraq must be returned to full sovereignty.

2) We demand the passage of a labour law promised by our Constitution, which adheres to ILO principles and on which Iraqi trade unionists have been fully consulted, to protect the rights of workers to organize, bargain and strike, independent of state control and interference.

3) We demand an end to meddling in our sovereign economic affairs by the International Monetary Fund, USA and UK. We demand withdrawal of all economic conditionalities attached to the IMF’s agreements with Iraq, removal of US and UK economic “advisers” from the corridors of Iraqi government, and a recognition by those bodies that no major economic decisions concerning our services and resources can be made while foreign troops occupy the country.

4) We demand that the US government and others immediately cease lobbying for the oil law, which would fracture the country and hand control over our oil to multinational companies like Exxon, BP and Shell. We demand that all oil companies be prevented from entering into any long-term agreement concerning oil while Iraq remains occupied. We demand that the Iraqi government tear up the current draft of the oil law, and begin to develop a legitimate oil policy based on full and genuine consultation with the Iraqi people. Only after all occupation forces are gone should a long term plan for the development of our oil resources be adopted.

We seek your support and solidarity to help us end the military and economic occupation of our country. We ask for your solidarity for our right to organise and strike in defence of our interests as workers and of our public services and resources. Our public services are the legacy of generations before us and the inheritance of all future generations and must not be privatised.

We thank you for standing by us. We too stand with you in your own struggles for real democracy which we know you also struggle for, and against privatisation, exploitation and daily disempowerment in your workplaces and lives.

We commend those of you who have organised strikes and demonstrations to end the occupation in solidarity with us and we hope these actions will continue.

This entry was posted in RagBlog and tagged Economy, Iraq, Labor. Bookmark the permalink.