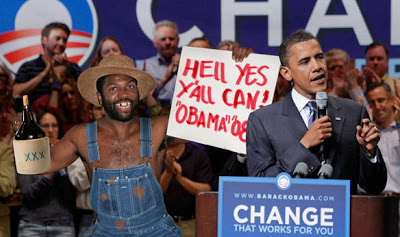 Cooter and Barack Obama. Photo courtesy The Onion.
‘Since Cooter’s emergence on the national scene, the Obama campaign has downplayed the brothers’ relationship’
August 14, 2008

BOONEVILLE, KY—Barack Obama’s once-commanding lead in the polls slipped to two points Monday, continuing a month-long slide that many credit to the recent appearance of the Democratic candidate’s heretofore unknown half-brother, Cooter Obama.

Long kept a family secret, the overalls-clad, straw-chewing Kentuckian first entered the public spotlight in July, when he drove his 1982 Ford flatbed pickup through the press corps at an Obama rally in order to inform his brother that he caught the skunk that had been living under his front porch. According to witnesses, Cooter’s skunk proceeded to spray Washington Post political reporter Michael D. Shear in the face.

Cooter Obama attempted to pay for damages to the Capitol lawn with homemade jerky.

“Sorry ’bout that, mister! Some tomater juice’ll take care of the stank,” Cooter said as his mortified younger brother led him off the stage. “Shoot, Barack, you didn’t tell me you was runnin’ for president!”

Since Cooter’s emergence on the national scene, the Obama campaign has downplayed the brothers’ relationship. A statement issued last week by Obama’s top adviser, David Axelrod, claimed that the two lived together only for a brief period in 1981, shortly before Barack left to attend Columbia University and Cooter had to drop out of chicken-killing school because an air conditioner fell on his head.

Nonetheless, political experts said Cooter’s increased visibility in recent weeks has hurt Obama’s polling among urban, upper-middle-class, non-straw-hat-wearing voters. The Obama camp has scrambled to control the damage caused by Cooter’s penchants for loudly practicing his banjo during Obama’s speeches, repeatedly referring to Barack by his childhood nickname, “Ol’ Jelly Legs,” and chasing his troublemaking pig, Mbogo, in the nude in the background of Obama’s CNN interview on the importance of education.

The problem came to a head last week, advisers said, when Cooter arrived unannounced at a $100-a-plate fundraiser, slipped past security, and proffered a jug of moonshine to the high-society donors, claiming it would “straighten their curlies.” In addition, dozens of would-be attendees at a Cedar Rapids, IA town-hall meeting Sunday were turned away at the door by the elder Obama, who was sitting at the entrance in a rocking chair and brandishing a double-barreled shotgun.

“What Sen. Obama’s half-brother meant to communicate was that he was pleased that the candidate’s message of change is fostering vigorous dialogue,” Obama campaign spokesman Bill Burton said following the incident. “In no way was his proposal to ‘fill y’all’s backsides with rock salt’ intended to be taken in any other way.”

In the past two weeks, Obama has lost support from such groups as PETA, which withdrew its endorsement when Cooter punched a swan in the face, claiming it was “one of them mean ones”; the Clean Energy Group, which protested Cooter’s recent attempt to fry a squirrel in a flaming 20-gallon barrel of diesel fuel; and Sen. John Kerry (D-MA), whom Cooter mistook for an outhouse Monday and urinated on for 35 seconds.

“I thought we would be able to escape controversy by leaving the country for a week and visiting Iraq and Europe,” an unnamed source in the Obama camp told reporters. “Little did we know that Cooter would command just as much attention back home by getting drunk with the Russian ambassador, lighting off fireworks, and crashing Obama’s campaign limo into a creek in the Ozark Mountains.”

Despite the setbacks he has caused, Cooter has secured a small but devoted following, and has occasionally managed to reflect well on the campaign. At a speaking engagement to which Obama arrived two hours late, Cooter kept the crowd’s spirits up by breaking out a washtub string bass and a washboard and holding an impromptu hoedown.

Although his primary focus has been to support his brother, Cooter Obama said he is not without political aspirations of his own.

“Shoot, I’m helpin’ because I love my brother,” Cooter said. “Maybe if he gets elected he can make me Secretary of Moonshine. Course, that don’t mean I ain’t votin’ for the other fella. Ol’ Jelly Legs wants to take my guns away.” 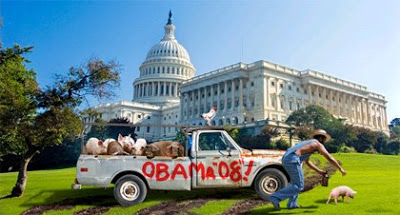