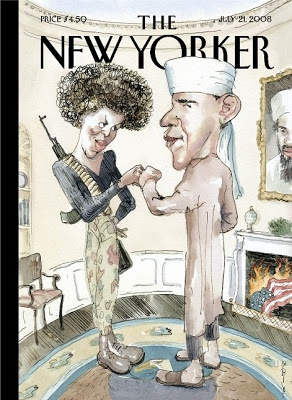 I think the idea that the Obamas are branded as unpatriotic [let alone as terrorists] in certain sectors is preposterous. It seemed to me that depicting the concept would show it as the fear-mongering ridiculousness that it is.

I’m a little late to the party, but here is an absurd decorousness in the denunciations — from the Obama and McCain campaigns and across the liberal blogosphere — of the current New Yorker cover.

The top-line objection is to accuse the New Yorker of poor taste. In the limited context of campaign discourse this is true. But magazines and other journalistic enterprises would be crazy to buy into the notion that abitrary etiquette of American campaigns (which encourages candidates to lie baldly, and surrogates to spin and smarm and swift-boat, while prohibiting frank talk to a host of issues from race to religion to terror itself), should govern their decisions.

Underneath that are liberals’ more practical fears about the cover’s impact on Obama’s campaign. This line of thinking goes: Obama is so new and different, his image so unformed in the public mind, and U.S. opinion still so anxious on the matter of terrorism, with Democrats perceived as weak — that the Obama campaign, and we as a nation, just can’t handle images like this, because they might be interpreted the wrong way.

Really? No one worries that TNY’s readership will take it literally. Fox will show it and chortle, but hey — it will likely only confuse conservative viewers inclined to think of Obama as a Muslim terrorist dupe. Why are the liberal elites advertising Obama’s subversion, mocking it? The image itself is an absurd jumble of terrorist iconography — Black Power, al Qaeda, flag burning, etc.

Seven years after 9/11, after an onslaught of bad-faith political manipulation over terror, and with the threat of al Qaeda now quite debatable, Americans can certainly handle a little jokey imagery about terrorism and politics. Free expression is a bulwark of American liberalism, part of what makes it what it makes it superior to political philosophies that rigidly enforce what words can be uttered and images can be shown. When liberals start policing the “poor taste” of cartoons so that some people don’t get the “wrong idea,” it only reinforces the notion that all the fearmongering was effective, and perhaps right — and also shows how weak and tenuous Democrats fear their position on terrorism remains.

A WorldNetDaily.com poll asked the website’s readers to “[s]ound off on the New Yorker’s cover with turban-wearing Obama, gun toting wife,” but while the New Yorker said in a press release that the cover “satirizes the use of scare tactics and misinformation in the Presidential election to derail Barack Obama’s campaign,” for a majority of respondents to WND’s poll, the cover apparently provided support for their false perceptions of Obama’s religion and patriotism: A majority of respondents selected the option stating that “[t]he image isn’t too far from the dangerous truth about the Obama family.” 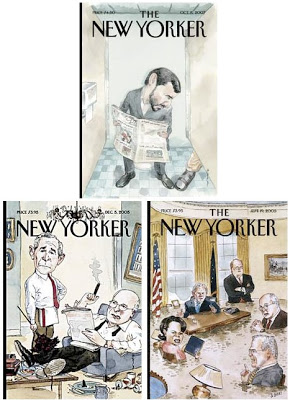 Cable news channels and bloggers are buzzing about The New Yorker magazine cover featuring Barack Obama dressed in Muslim garb and Michelle Obama with an afro and machine gun, doing a “terrorist fist bump” in the Oval Office, while an American flag burns in the fireplace. The cartoon by Barry Blitt drew immediate condemnation from the Obama and McCain camps.

In an interview on the Huffington Post Web site, New Yorker Editor David Remnick argues, “Obviously I wouldn’t have run a cover just to get attention — I ran the cover because I thought it had something to say. What I think it does is hold up a mirror to the prejudice and dark imaginings about … both Obamas’ … it combines a number of images that have been propagated, not by everyone on the right but by some, about Obama’s supposed ‘lack of patriotism’ or his being ‘soft on terrorism’ or the idiotic notion that somehow Michelle Obama is the second coming of the Weathermen or most violent Black Panthers. That somehow all this is going to come to the Oval Office.

“The idea that we would publish a cover saying these things literally, I think, is just not in the vocabulary of what
we do and who we are… We’ve run many many satirical political covers. Ask the Bush administration how many.”

Cartoonist Barry Blitt defends the cover by saying, “It seemed to me that depicting the concept would show it as the fear-mongering ridiculousness that it is.” So the cover cartoon is simply an exaggeration of the allegations against the Obamas.

There are rules to political cartoons that allow cartoonists to draw in an elegant, simple, shorthand that readers understand. Exaggeration is a well worn tool of political cartoonists; we use it all the time. I’ve drawn President Bush as the King of England, to exaggerate his autocratic tendencies. I’ve drawn the president as a dog, peeing all over the globe to mark his territory. I exaggerate every day, and I don’t expect my readers to take my exaggerations seriously — but when I draw an absurdly exaggerated political cartoon, I’m looking for some truth to exaggerate to make my point. A typical stand-up comedian will tell jokes about things the audience already knows or agrees with, “it’s funny because it’s true,” or true as the comedian sees it. It is the same for cartoonists — our readers know that we’re exaggerating to make a point we believe in.

And Was the New Yorker Cover Gutsy? The New Republic

And The Bad Frame: Why Are the New Yorker, Salon and Other Liberal Media Doing the Right’s Dirty Work? truthout