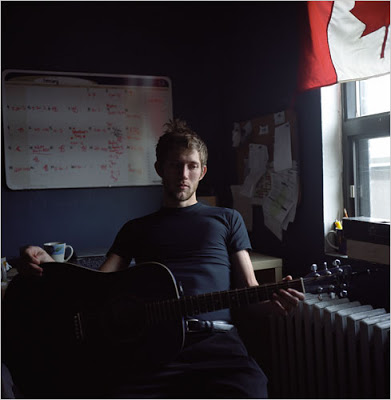 TORONTO — James Corey Glass, apprentice mortician and United States Army deserter, was keeping an unusually close eye on the text messages coming into his cellphone. He was hoping to hear that a court had blocked the Canadian government’s attempt to send him back to the United States.

On Wednesday afternoon, the message came: Mr. Glass, 25, could remain in Canada while he appealed his removal order by the country’s Immigration Department. It was a welcome reprieve, he said, but well short of a guarantee that he and other deserters could make Canada their new home.

The Canadian government’s effort to remove Mr. Glass contrasts with the warm reception given to deserters and draft avoiders from the United States during the war in Vietnam. And although the war in Iraq has very little support among Canadians, the situation of Mr. Glass and others who abandoned their military positions provokes a wide range of responses. For American soldiers seeking an escape, Canada is no longer a guaranteed haven.

“It’s quite clear that the current Canadian government does not want to annoy the U.S. government on this issue and will not give any ground,” said Michael Byers, a professor of politics and international law at the University of British Columbia.

During the Vietnam War, the Liberal prime minister, Pierre Elliott Trudeau, welcomed American deserters and draft dodgers, declaring that Canada “should be a refuge from militarism.” Americans who arrived were generally able to obtain legal immigrant status simply by applying at the border, or even after they entered Canada.

But while the current Conservative government of Prime Minister Stephen Harper has not backed the Iraq war, it has shown little sympathy for American deserters. During a recent parliamentary debate, Laurie Hawn, a Conservative from Alberta, asked, “Why do they not fight it within their own legal system instead of being faux refugees in Canada?”

No American deserter of the Iraq war has been deported by the Canadian government, but that is not for lack of effort. Immigration authorities have ordered about nine deserters to leave Canada, leading to public battles in the courts.

Changes to immigration laws have made it far more difficult for deserters to remain in Canada. Deserters wanting at least temporary legal status must be declared refugees. But refugees in Canada must show that they have, as the government puts it, a “well-founded fear of being persecuted” for religious, racial or political reasons. Alternately, refugees may demonstrate that for them to be returned to their home country would put their lives at risk, or would subject them to torture or “cruel and unusual treatment or punishment.”

As for Mr. Glass, he said he was between low-paying factory jobs in Indiana when he joined the National Guard six years ago.

But he said he had one crucial question for the recruiters before he signed. “They told me I’m not going to fight a war on foreign shores,” Mr. Glass said.

Maj. Nathan Banks, a spokesman for the Army, said, “recruiters would never have made a comment of that sort.”

Not long after Mr. Glass joined, it became clear that he would not be exempt from overseas duty, he said. But he stayed with the Guard and was deployed to Iraq in 2005.

Six months into his 18-month tour, Mr. Glass, a sergeant, said he was sent home on a temporary stress leave. Immediately after returning to the United States, he went on the run, living in a tent in various states, he said. Like many of his counterparts in Canada, Mr. Glass eventually contacted Lee Zaslofsky, who deserted the United States Army for Toronto in 1970 and is now a national coordinator for the War Resisters Support Campaign, which houses and advocates for deserters. As he says he does with all callers, Mr. Zaslofsky, a naturalized Canadian citizen, told Mr. Glass that while he would be beyond the reach of the United States military in Canada, there were no guarantees he could stay in the country. Mr. Glass moved anyway.

A big difference between the current round of deserters and those during the Vietnam War appears to be scale. No precise data exist, but Victor Levant, who wrote “Quiet Complicity: Canadian Involvement in the Vietnam War,” estimated that about 20,000 Americans came to Canada to escape the Vietnam-era draft and 12,000 others in the armed forces deserted and entered Canada. Mr. Zaslofsky said he believed that no more than 200 American deserters from the Iraq war were now in Canada.

While the government does not publish figures, it appears that only about 50 deserters have made refugee applications, with the rest living illegally in Canada.

Exactly what Mr. Glass and others face if they return to the United States is unclear. Major Banks, the Army spokesman, said Mr. Glass had been given “an other-than-honorable discharge” from the California National Guard, but remained a member of the Army Reserve. He declined to say what, if anything, would happen to Mr. Glass if he returned to the United States.

Mr. Glass, however, said he had been advised by a lawyer in the Army’s legal unit, and by an American military law specialist he had hired, that the discharge did not mean that he would avoid desertion charges, which could bring the equivalent of a felony conviction and a prison sentence. “They said it doesn’t change anything,” Mr. Glass said, referring to his lawyers. His Canadian lawyer agreed. The deserters have support among opposition members of Parliament, who have passed a motion asking the government to give deserters and their families legal immigrant status. The measure, however, is not binding, and the Conservatives have ignored it.

Bob Rae, a Liberal member of Parliament, acknowledged that the response of the Canadian public to the deserters’ cause was muted compared with its reaction during the Vietnam War, partly because the current newcomers are volunteers, not conscripts. But, he argued, the public favors giving American deserters special consideration.

“As a country which concluded that the Iraq conflict was not justified under international law, we have to take a position,” Mr. Rae said.

Karen Shadd, a spokeswoman for the Immigration Department, said that no special deals were planned.

“Creating a special and unique channel would undermine the fairness of the system,” she said.

The results under the current system have generally been discouraging for people like Mr. Glass, including a refusal by the Supreme Court of Canada to hear appeals from two deserters.

But deserters have won judgments as well. On July 4, a ordered a refugee board to reconsider the application of Joshua Key, an Army private who said he had witnessed many abuses by American forces in Iraq.

As for Mr. Glass, he said he would return if ultimately ordered.