Terrified by the noise of the fireworks, Suki had panicked and bolted over the fence and down the street. 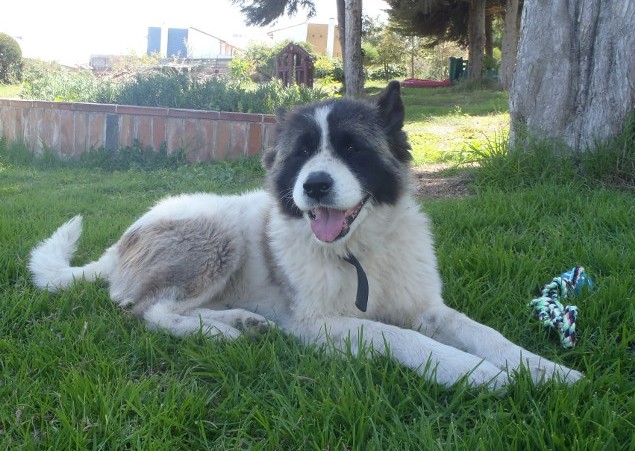 Suki before her road trip.

QUITO, Ecuador — Our dog ran away on New Year’s Eve. We didn’t notice. We were watching the dozens of firework displays in the sprawling urban areas visible from our house overlooking the valley. Bright, colorful explosions, large and small, burst high up in the chilly mountain dark before, during, and after the midnight hour. Our dog, Suki, a large, long-haired brown-and-white Akita with the face of a panda, often roamed around at night. We didn’t think to look for her.

The next morning we were still not alarmed when she didn’t come immediately to breakfast. But by noon with her still a no-show, we got concerned. We called her. That was usually enough to bring her bounding back home. But not this time. By nightfall we were genuinely alarmed. What could have happened? Where could she be? Was she hurt? We prowled in the dark with flashlights, calling her name.

The next morning we took to the streets
of the neighborhood.

The next morning we took to the streets of the neighborhood, up and down the blocks, looking and asking people if they had seen her. By afternoon we had printed up a poster with her photo and our information, offering a reward. We photocopied a couple hundred of them and began to tape them to phone poles and walls in our neighborhood, gradually moving further afield.

Then we got a call.

Hey, they found Suki! The family piled into the car and headed toward the place the caller described, about a mile from our house. But when we arrived at the correct address, the dog had disappeared. The woman who had called us wasn’t sure which way the dog went. We scoured that unfamiliar area, calling her name, encountering several other dogs, but not ours.

That’s when we began to realize how many lost dogs were roaming the streets of the city. We should have known that anyway from the many other “lost dog” notices stuck to walls and poles. Unlike another city where we’d lived, Quito does not have packs of feral dogs hunting together and menacing other animals and even humans. In Quito many families keep watch dogs or pets and many pet shops and veterinarians exist to serve them. The dogs we met on the road had clearly belonged to someone at some point, and had been cared for, but had somehow ended up lost or abandoned.

As we put up more notices and asked more people we saw about Suki, we began to get a rash of “false positive” reports. They came in at all times, from early morning to late at night. “We’ve found your dog!” And out we’d go, only to discover that “our dog” was actually another animal, who, despite the photo and description we had posted, often bore no resemblance to Suki.

One of the dogs mistaken for ours was a lovely, if forlorn, dapple gray English setter.

One of the dogs mistaken for ours was a lovely, if forlorn, dapple gray English setter. He looked nothing like Suki, but he clearly belonged to someone he was missing, who was no doubt missing him. He was sad and tired. The third time we were called about this same dog, we decided to bring him home and feed him. We called him Ralph, a careless name for a transient guest. Ralph was very hungry. He wolfed down all the food we gave him and then threw it all up.

The third day of Suki’s disappearance became the fourth. We began to despair, figuring the more time that passed, the less chance we’d have of ever finding her. Should we keep Ralph as a consolation dog and give up our search? Our younger son began to cry at this suggestion.

Then we got a break. A friend told us about a lost-and-found pet site on the internet. We checked into it and there, on Day Five of her disappearance, was a photo of Suki, posted by a veterinarian. We called the vet, who told us a couple had brought the dog in for a check-up.

When we finally spoke to the couple who had our dog, they were suspicious. How do we really know she’s YOUR dog? We texted them a photo of Suki, told them there was a reward and gave them directions to our house. When they drove up to our house, the first thing Suki did was jump out of their car and attack Ralph, who was sitting in Suki’s usual place.

We were stunned, since Suki had never before (or since) exhibited hostility to any animals, human or canine. We had to separate them and stick Ralph in the garage for his own protection. Not only did the couple who brought Suki back refuse our reward, they insisted on giving us a huge bag of dog food and various expensive chew toys, balls, and other doggy paraphernalia. They had bought more goodies for Suki in five days than we had in more than a year. 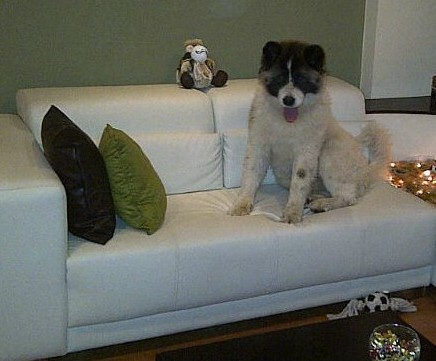 Suki, during her short but cushy life as Emma.

Terrified by the noise of the fireworks, Suki had panicked and bolted over the fence and down the street until she ran into this couple, in their late thirties.

“She came right up to me as if she knew me,” the woman said. They looked around but didn’t see anyone with her. So they opened their car door, Suki jumped right, in and home they went to their apartment, three instead of two. “She was just what we needed,” said the man. That made us wonder if they had tried but failed to have children.

“We decided to call her Emma, after the baby on Friends,” the woman told us. That startled us. So did the couple’s tears on parting with the dog they had known for five days. We gave them one of our Lost Dog posters to confirm that Emma was indeed Suki and perhaps as a souvenir.

Next morning early we got a call from the couple, who told us to love our dog twice as much as we had before.

Next morning early we got a call from the couple, who told us to love our dog twice as much as we had before. They texted us photos of Suki as Emma,in their posh apartment, lolling around on their thick shag carpet, lying in their king-size bed, sprawled out on a big couch (perhaps in front of a TV while Friends reruns were on?).

We had imagined Suki hungry and dirty in some alley, perhaps injured or even dead. But she had been living the high-life with her Hollywood nickname, doted on, spoiled and overfed. The couple had taken her to two veterinarians for check-ups and one long ride in the country. But they did not try to locate the dog’s owner. Luckily, one of the vets they consulted, hearing their story of meeting the dog, took a photo of Suki and posted it online to the lost animal network.

We had to sneak poor Ralph out of the garage, where he’d made a mess, and drive him to the humane society, where they assured us he would be treated and fed and kept and not destroyed. We left them some money to encourage that and to thank them. I can only hope his old owners found him again. We wanted to keep him but Suki was too jealous. And the couple who had taken our dog into their hearts and home showed no similar warm, fuzzy feelings toward Ralph.

Sometimes when we see Suki twitch and moan in her sleep, we wonder if she’s dreaming of her lost life of luxury, among the soft white furnishings in the high-rise apartment where she passed her Emma days and nights as we sought her, calling her old name, in the streets below.